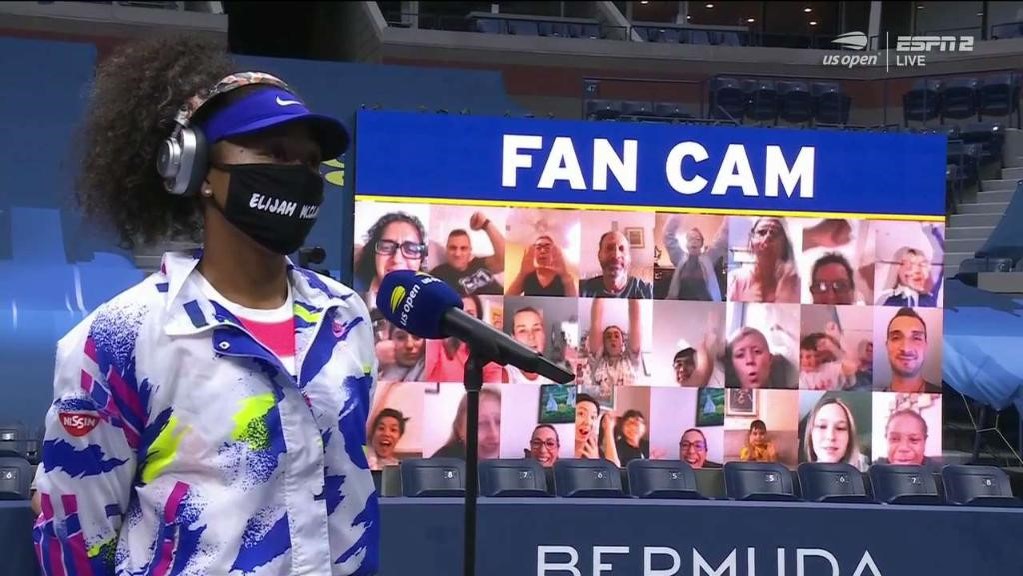 Naomi Osaka praised the motivational effect of watching top-class tennis after recording a comprehensive 6-1 6-2 victory over Camila Giorgi at the 2020 US Open.

Like many of the top players, the Japanese star has her own box within Arthur Ashe Stadium at this year’s event. And she has revelled in the opportunity to watch some of the world’s best in action.

“For me it’s very inspiring,” Osaka said. “Yesterday I watched Murray play Nishioka. That was really fun and they both played so well. Both of them are in my top five favourite players so I was really sad that they had to play each other. It’s really motivating to step outside and see really good tennis at your front door.”

As in her previous match, the Japanese player chose to draw attention to a black person who was a victim of police brutality by wearing a mask with their name on it. On this occasion, the individual highlighted was Elijah McClain, who died in August 2019.

“People watch tennis all around the world and names we think are common are probably not common overseas,” Osaka explained. “I just want people to have more knowledge. I feel like the platform I have right now is something I used to take for granted. And I feel like I should be using it for something.”

In truth, the match itself was less interesting than the Japanese star’s post-match comments. Osaka played excellent tennis throughout. But she was never tested by Giorgi, who hit 4 double faults and made 24 unforced errors.

Consequently, the two-time Grand Slam champion raced through the first set. She broke the Italian twice and won it 6-1 in just 28 minutes.

The second set was a bit more competitive. Giorgi made Osaka work harder for her points. She also hit a couple of rasping backhand winners and earned two break points.

However, the Japanese again broke the Italian twice and she still comfortably won the set 6-2 to clinch a victory that could scarcely be any more convincing.

Osaka’s next match looks set to be an intriguing one. She will take on Marta Kostyuk, who is one of the most talented youngsters on the WTA circuit. The Ukrainian, 18, took out the 31st seed Anastasija Sevastova 6-3 7-6(5).

Caroline Garcia Stuns Pliskova As Seeds Tumble At US Open