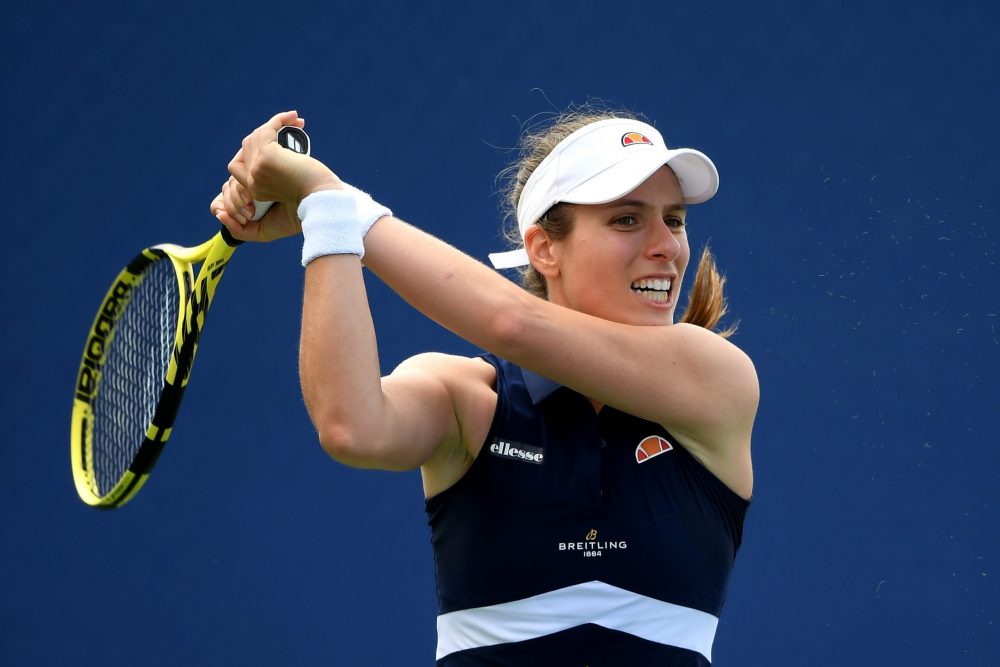 Johanna Konta showcased her title credentials during a commanding 6-4 6-3 win over Maria Sakkari at the Western & Southern Open in New York.

The Greek, 25, knocked out Serena Williams in the previous round but the Brit proved to be far too good for her on this occasion.

“It was really tricky conditions,” Konta said in her on-court interview. “Maria has quite a lot of variety in the way she hits the ball off both sides, so I have to adapt a lot to the way she plays. I was really pleased I was able to adapt well and stay tough when I needed to.”

The early exchanges set the tone for the match. Konta held serve with ease and put Sakkari’s serve under intense pressure with aggressive returning.

The Greek withstood the Brit’s onslaught in the opening game, but Konta broke through in the third game and established a 3-1 lead.

In game seven, the World No.15 took Sakkari to deuce and looked like she might increase her advantage. Ultimately, she did not manage to break, but she continued to serve superbly and soon wrapped up the opening set.

The second set began with a scrappy game. Sakkari made three errors to hand Konta a break point. She saved it well with a powerful forehand. The Brit then earned herself another break point with a backhand winner. However, she could only watch and admire as the World No.21 skilfully crafted an excellent opportunity for a volley winner to save it.

Despite her high-class play on the break points, Sakkari continued to struggle to close out the game. Eventually, it cost her dearly as Konta drew an error to seize a vital break.

The Greek played well to earn two chances to break back in game four. However, she wasted the first by missing a forehand. Then the Brit saved the second with a clinical backhand.

Konta could have finished the match off quickly. She had chances to break Sakkari in both of her next two service games.

Although she did not manage to take those opportunities, the Brit eventually broke the Greek for a third time in the last game to clinch a well-deserved win and a place in the semi-finals.

Konta has a great chance to go on and claim the title at the Western & Southern Open. She is playing superb tennis this week and is yet to drop a set at the event.

In order to reach the final, the Brit will have to beat two-time Grand Slam champion Victoria Azarenka. The Belarussian is also having an excellent week, and she continued her impressive progress through the draw today with an encouraging 7-6(9) 6-2 victory over dangerous Tunisian Ons Jabeur.