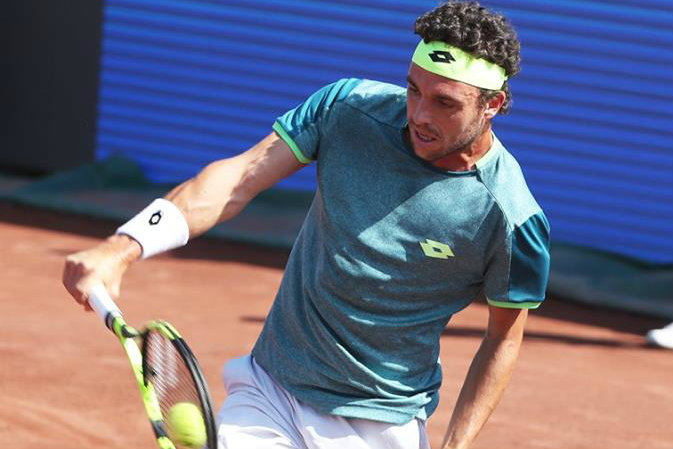 “Edoardo is born. Seeing mother Gaia holding our son in her arms is the strongest emotion felt until today”,wrote Cecchinato.

Cecchinato produced the biggest upset of his career when he beat Novak Djokovic 6-3 7-6 1-6 7-6 in the quarter finals of the 2018 French Open before losing to Dominic Thiem. He became the lowest-ranked Roland Garros semifinalist since 1999 and the first Italian Grand Slam semifinalist since Corrado Barazzutti at 1978 Roland Garros.

The Sicilian player started playing tennis at the age of 7 with his uncle Gabriele Papacelli. His father Sergio is a manager, his mother is a secretary.

Marco qualified for Umag in July 2014, but he lost to his countryman Andreas Seppi in the first round. He made his Grand Slam debut at the 2015 US Open and played his first match at Wimbledon losing to Kei Nishikori in the first round. He reached his first quarter final at Bucharest in 2016 and claimed his first two ATP titles in Budapest and Umag in 2018. In the hungarian capital he reached the final as a lucky loser, after losing in the qualifying round.

In 2019 Ceck (as he is nicknamed by Italian tennis fans) did not drop a set en route to winning his third title in Buenos Aires, where he beat Diego Schwartzman) and reached semifinals in Munich and Doha. In 2020 he broke a six-match tour-level losing streak and saved two match points to beat Leonardo Mayer in Auckland first round. He lost the second set tie-break against Mayer 20-18, tying record for the longest single stie-breaker in ATP Tour history since 1990. Cecchinato advanced to 13th ATP Challenger Tour final of his career at Punta del Este (Uruguay).