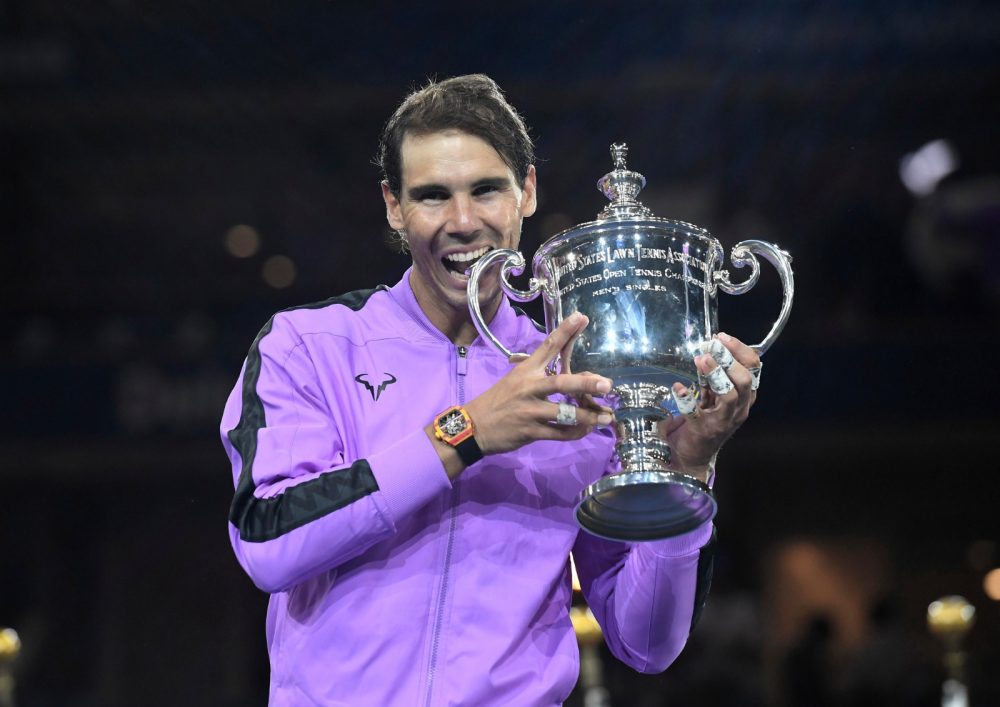 Newly crowned US Open champion Rafael Nadal has insisted that it is his love for tennis which is driving him to continue his career and not the prospect of breaking a record currently held by nemesis Roger Federer.

Nadal defeated Russia’s Daniil Medvedev in a five-set thriller on Sunday that lasted just shy of the five-hour mark. The achievement was his 19th triumph at a major event since 2005. He is now just one away from levelling with Federer for the most grand slam singles title ever won by a man. A hotly contested battle that also involves Novak Djokovic, who has 16 major titles so far in his career.

“I don’t look it that way. I always say the same: I would love to be the one who win the most (grand slams), but I am not thinking and I not going to practice every day or not playing tennis for it. I am playing tennis because I love to play tennis.” Said Nadal.
“I can’t just think about Grand Slams. Tennis is more than Grand Slams. I need to think about the rest of the things.”

Nadal’s grand slam tally include a record 12 French Open titles, four at the US Open, two at Wimbledon and one at the Australian Open. Overall, he has won 88% of his matches played at major tournaments so far in his career (271 out of 309).

“All the things that I achieved in my career are much more than what I ever thought and what I ever dream,” he said.
“I would love to be the one who has more. But I really believe that I will not be happier or less happy if that happens or not happen.
“What gives you the happiness is the personal satisfaction that you gave your best. In that way I am very, very calm, very pleased with myself.”

The Spaniard is now within a shot of ending the season as world No.1 for the fifth time in his career. An achievement that has only been accomplished by four other men in the Open Era. He is currently 640 points adrift from Novak Djokovic. However, he has no ranking points to defeat for the rest of the season.

Whilst closing in on a return back to the top of the rankings, the 33-year-old has insisted that there are more important things for him to focus on. Putting his health ahead of everything else. Nadal has been troubled by numerous injury problems throughout his career.

“If I am able to be No.1, great.” He explained.
“ Of course, it is great to be in that fight. But for me personally, is not really a fight. I just try be competitive the weeks that I need to compete, or the weeks that I want to compete.’
“With my age and with my goals, I cannot lose energy or time to follow the No. 1. I need to think about my career in a different way.”
“My main goal is play as long as possible and compete, being competitive. Sometimes if you need to follow the No. 1, you going to lose years of your career.”

Nadal is currently the 11th oldest player in the top 100.

Rafael Nadal Believes He Can Get Even Better