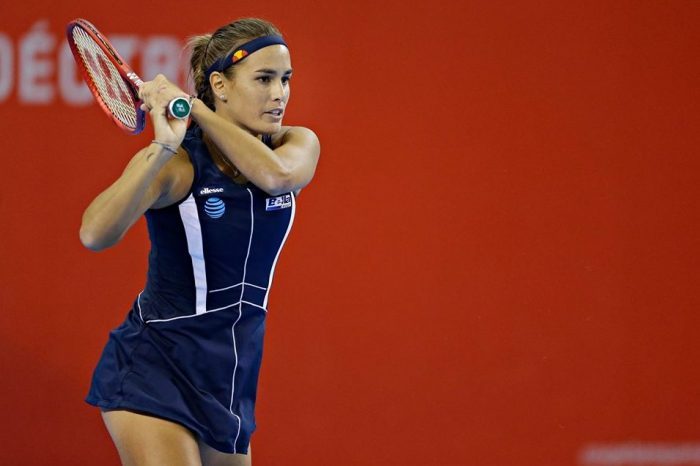 Olympic champion Monica Puig has partly blamed her first round exit from the US Open on her recent controversial split with coach Kamau Murray.

The world No.59 crashed out 6-3, 6-3, to Sweden’s Rebecca Peterson on the opening day of the grand slam tournament. Making it the fourth time she has lost in the first round at Flushing Meadows in six appearances. The latest loss continues what has been a disappointing run on the tour from Puig, who last won back-to-back matches in June at the French Open.

“It hurts, obviously,’ she said in Spanish following the match.

Following her loss, the 25-year-old has said she was dumped by former mentor Murray only days before the start of the grand slam. Murray recently reunited with world No.10 Sloane Stephens. A player who he guided to her first and only grand slam title back in 2017. Puig has said she wasn’t told that Murray would not be coaching her until the news broke out in public.

“I was informed by people close to me that my coach would not be able to come here with me when he was actually secretly working with another player, and that kind of affected my mentality and preparation.” she said.

Describing the situation as a ‘slap in the face’ Puig is left pondering her next move on the tour. According to tennis.com, she will move back to Florida after living in Chicago to train with Murray. Her win-loss record for the season now stands at 16-15.

“Giving, and receiving, a slap in the face is hard,” she said. “Something like this puts extra stress and pressure on you, because you want to do something for yourself.
“I was really looking forward to winning, to proving to myself that no one can treat me like that and I’m stronger than that. That’s why this defeat hurts so much, because I feel I’ve failed myself.”

Puig will not be leaving the US Open yet. She is still participating in the doubles draw where she has teamed up with Dayana Yastremska.

Related Topics:2019 US Openmonica puig
Up Next