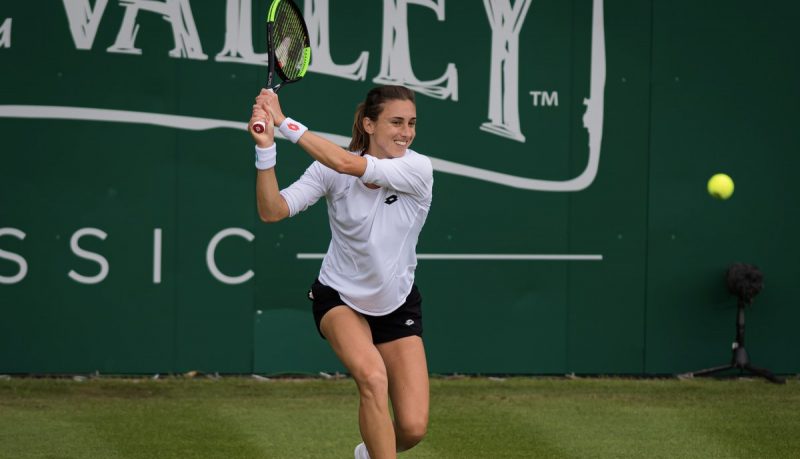 Jelena Ostapenko squandered five match points during a surprising 7-6(4) 5-7 1-6 loss to Petra Martic at the Nature Valley Classic in Birmingham.

The Latvian, 21, seemed certain to win when she was 7-6 5-3 up and serving for the match. However, she made three double faults to surrender her serve.

This setback should not have mattered, as Martic handed Ostapenko three match points when she made two sloppy errors in the next game. Incredibly, the Latvian wasted them all by making unforced errors.

She re-focussed and hit a fierce backhand to earn another chance, which the Croatian saved with an ace. On the next point, Ostapenko fell over and Martic somehow missed the open court.

The Croatian responded well. She sent down an unreturnable serve, profited from an error from the Latvian and then clinched a crucial hold with an ace.

The next game was crazy too. Ostapenko did well to save three break points, only to waste that good work by making consecutive double faults to surrender her serve for the second time in a row.

After that, the Latvian collapsed mentally. She made more errors to hand Martic the second set, and then barely found the court in the decider as she lost it 6-1.

“I still can’t believe I won,” the Croatian said. “45 minutes ago, I was saving match points. It’s really incredible that I managed to pull through.”

She continued, “(When I was 4-0 down) I just tried to break her rhythm. That’s the only way. If she’s in her zone, she wins Roland Garros with the way she plays.”

Martic also spoke about the challenges of playing an opponent who is making lots of errors. “It’s a tricky situation,” she said. “When you see your opponent struggling and you just try to put the ball in, sometimes it doesn’t work. So I tried to keep the pressure on her and not just hope she was going to continue making mistakes. I’m really happy that she didn’t manage to find herself in the end.”

Ostapenko looked set to pick up where she left off in the previous round when she made a brilliant start to the match. She hit winners from all over the court and raced into a 4-0 lead.

The Latvian then seemed distracted after she was twice adjudged to have foot-faulted in game six, and she allowed Martic to level the set at 4-4.

Ostapenko produced some spectacular tennis to hold and then break for a 6-5 lead. Although she then threw away her next service game, she recovered to win a tense tie-break 7-4.

The Latvian hit a series of eye-catching winners as she established a 4-0 lead for the second consecutive set. But she faltered to give Martic a foothold in the set, and then fell apart shortly afterwards.

Ashleigh Barty: I Am Becoming A More Complete Player