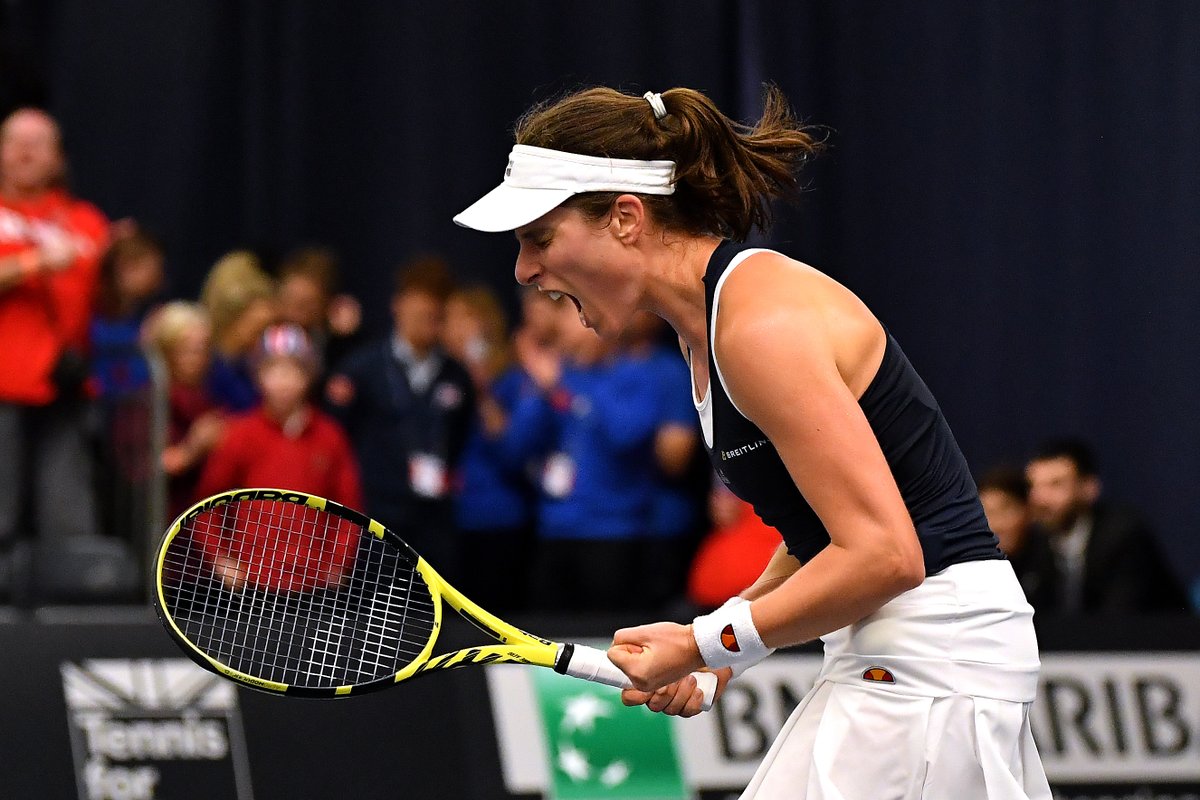 Johanna Konta fought back from a set down to beat Maria Sakkari 3-6 6-2 6-3 and give Great Britain an unassailable 2-0 lead against Greece.

The Brit, 27, looked to be the weaker player in the opening set against the rising star from Athens, who struck the ball cleanly and took her chances well.

However, the World No.39 is an experienced Fed Cup campaigner by now, and she turned the match around very impressively to get the win for her team.

‘I don’t think there’s much better than that – in this kind of arena, in front of this kind of support,’ Konta told fedcup.com. ‘I’ve played on all the centre courts at all the Grand Slams but this is definitely what you look for in a match.’

‘You look for a competitive match against a really great player, you look for it to go the wire and you look to be in front of a crowd that are so behind you and so invested in the match and who are living it with you. It was a complete pleasure to be out on court.’

Early in the second set, the Brit’s prospects looked bleak as she immediately went down a break and seemed a little disconsolate.

But if Konta was feeling pessimistic, she shrugged off those negative thoughts quickly and battled her way back into the set.

The 2017 Wimbledon semi-finalist broke Sakkari twice in a row to move 4-1 ahead. She then almost won her fifth consecutive when she had four break points on the Greek’s serve.

However, the World No.39 hung on, despite a disagreement with the umpire, and managed to put Konta under pressure in game seven.

The Brit held firm, and then broke Sakkari again to take the set 6-2 and send the home crowd into raptures.

Both players gave it everything they had in the decider and the first five games took over 20 minutes to complete. But then Konta took charge as she broke the Greek and quickly finished off the set 6-3. 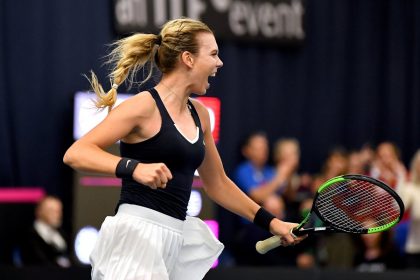 Katie Boulter was also given a tough test by Valentini Grammatikopoulou in the opening singles rubber of the tie as she recovered after losing the second set to win 6-3 4-6 6-3.

The British No.2 made an excellent start to the match. She broke immediately and served well to win it comfortably in just 34 minutes.

However, the Greek produced an inspired fightback in the second set and it soon became apparent that Boulter had a real match on her hands.

When Grammatikopoulou went 2-0 up in the decider, the situation looked dire for the Brit. But she never gave up, and soon earned a couple of break points in game four.

The World No.171 saved them both, along with two more, before Boulter eventually took the fifth to level the match. She then ground out a hold to move 3-2 ahead.

Unfortunately, her delight was somewhat marred by an unsavoury row involving Grammatikopoulou, Greece Captain Anastasios Bavelas and the umpire about what the player believed were ‘unfair’ line calls.

‘This umpire was not so good so I’m really disappointed in that in Fed Cup,’ Grammatikopoulou told the Daily Mail. ‘It’s really unfair to play like this.’

Now the momentum was with Boulter. She used it well to break the Greek again in the sixth game, and then held her nerve to secure two holds and seal a vital win.

The doubles had a tough task to try and live up to those dramatic singles matches, but Katie Swan and Harriet Dart performed impressively again to beat Anna Arkadianou and Despina Papamichail 6-1 6-4.

In the other Pool A tie, Hungary eased to a 3-0 win over Slovenia to set up a shoot-out for top spot with Great Britain on Friday evening.

Dalma Galfi gave her team the perfect start with a 6-1 6-4 thrashing of Kaja Juvan, Anna Bondar backed that result up with an impressive 4-6 6-1 6-4 defeat of Dalila Jakupovic and Reka-Luca Jani and Adrienn Nagy completed the whitewash by beating Nina Potocnik and Nika Radisic 7-6(3) 4-6 6-2 in the doubles.

Croatia beat Georgia 2-1 to set up a Pool B decider with Serbia, but they almost paid for their decision to allow their best player Donna Vekic to sit out the tie and rest.

Consequently, the Croatians asked Konjuh to join Daria Jurak for the deciding doubles. However, it did not look good for them when they fell 3-1 behind to Gorgodze and Oksana Kalashnikova.

To their immense relief, Konjuh and Jurak found their form and levelled the set at 5-5. Then Konjuh turned on the style as she hit a series of thunderous winners and excellent touch shots around the net to help her team win eight of the next nine games and close out the match 7-5 6-1.

In the other Pool B tie, Serbia thrashed Turkey 3-0. Ivana Jorovic beat Cagla Buyukakcay 6-2 6-3, Aleksandra Krunic edged out Pemra Ozgen 3-6 6-4 6-2 and Krunic and Olga Danilovic eased to a 6-2 6-3 win over Berfu Cengiz and Ipek Soylu in the doubles.