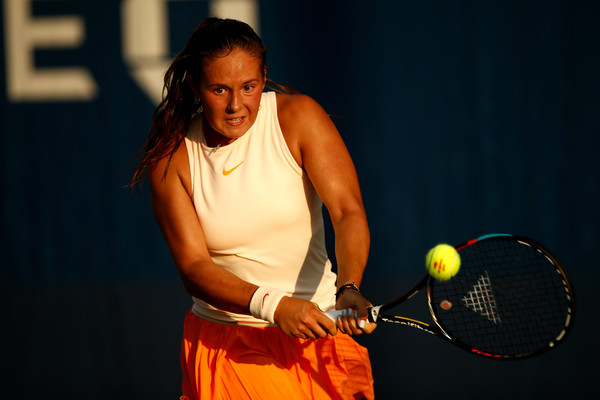 Daria Kasatkina was once agin inspired by her coach, Philippe Dehaes, as she defeated Ons Jabeur 2-6 7-6(3) 6-4 to win the Moscow title.

The Russian was 6-2 4-1 down to Jabeur before battling back to win an emotional first Kremlin Cup title as she drew inspiration from her coach.

The win was the second title of her career after winning Charleston in 2017 as she secured a lifelong dream to win a title in her home country.

It also means that she will be the first alternate for the WTA Finals in Singapore with Anastasija Sevastova being the second alternate.

However the sixth seed once again had to fight to victory as her Tunisian opponent dominated proceedings in the first set and a half.

The qualifier, who played nine hours of Tennis already, struck the ball with authority causing Kasatkina to defend for the majority of the match.

As expected the Russian looked nervy and Jabeur pounced with some awesome shot-making as she took the first set 6-2 in 24 minutes.

The Tunisian didn’t slow down in the second set as she recovered from a break down to race to a 4-1 lead. The world number 14 needed inspiration once again, so on came her coach Philippe Dehaes with the following message:

Down 6-2, 4-1 down, a despondent Daria Kasatkina called out Philippe Dehaes @tennisrussia.

Here’s what he said: pic.twitter.com/K6VuDIjM8A

It once again seemed to have worked as she pulled the break back and started to play without fear, which is what Dehaes requested.

Despite getting the crucial break, the Russian’s serve was once again her weak point as Jabeur broke on her sixth break point to force a tiebreaker.

The Russian wasn’t going to let this match go away from her easily as she secured the tiebreak 7-3 with the Moscow crowd on their feet.

The third set was topsy-turvy affair with Kasatkina surrendering an early break lead as Jabeur continued to hit through the stubborn Russian.

Eventually the amount of matches being played by the Tunisian this week proved too much as her tiredness got the better of her.

The Tunisian started to cry before the final game and those tears amplified throughout the game. However Kasatkina held her nerve to break to love, which lead to emotions of her own.

Despite the loss, it was a great week for Jabeur who now enters the 2019 season as a top 100 player and made Tunisian tennis history with a first WTA final.

However it was Kasatkina’s day, who wins the Kremlin Cup for the first time and becomes the sixth Russian player to win the prestigious event.

Now the Russian goes to the WTA Finals as the first alternate after her efforts in Moscow this week as she looks to close a fantastic season in style.