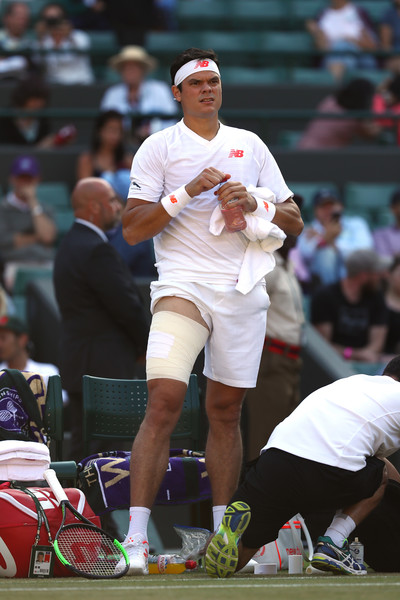 Milos Raonic said the upper leg injury that hampered him in Wednesday’s four-set Wimbledon quarterfinal loss to John Isner felt like “a tear” in his muscle.

Raonic, who called for the trainer at 1-2 in the fourth set, had his right leg heavily wrapped and then had movement issues as the No. 9 seed closed out the victory for his maiden grand slam semifinal appearance. The Canadian said he first noticed the issue in the opening games of the set, which came just over two hours into the match.

“It feels like a tear of the muscle. I don’t know to what extent,” Raonic said. “That’s sort of the sensation I had.”

The big-hitting Raonic, who fell to Andy Murray in the Wimbledon final two years ago, said the injury affected him most on his most powerful weapon: the serve. He had 31 aces in the match, six more than Isner, but only two to an equal number of double faults in the final set.

Isner broke the No. 13 seed twice in that frame, including in Raonic’s first service game after he received treatment. With Raonic at the net, the American handcuffed his northern neighbor by placing a backhand right at Raonic’s feet, forcing him to hit an awkward volley that he couldn’t keep in play. Isner threatened in Raonic’s next service game, then broke again on match point by commanding a point with the Canadian at the net.

He said the injury may have affected him in some of those scenarios.

Well, any time I got low [I felt it],” Raonic said. “There wasn’t much going on from the baseline or at the net. It was only going down for one shot. To sort of transfer the weight, to be able to jump to my serve, because I was doing that every single point I was serving, was the toughest part.”

The 27-year-old, who has struggled with injuries almost constantly throughout his career, most recently missed time this spring with a knee problem; he did not play the French Open and contested just three matches in May. He brushed aside any long-term concerns on Wednesday, however, saying his plan to next play the early August Masters series event in Toronto — the biggest tournament in his home country — remained intact.