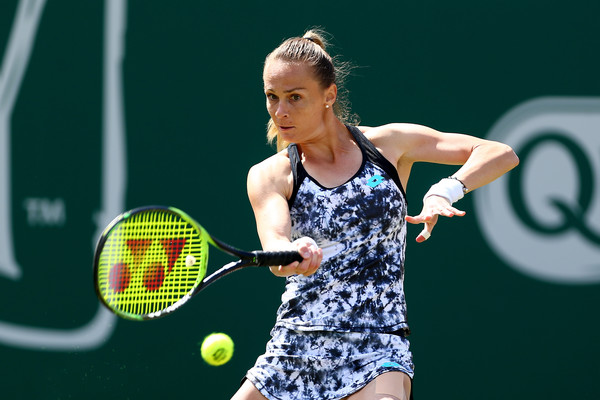 The Slovakian, 29, is in superb form on her favourite surface. She now has a great chance to make it through to only her second WTA Premier final.

“I’m already pretty satisfied with the results,” Rybarikova said. “I think it’s great to make the semifinals of such a big tournament and to beat a top ten player, a very dangerous player (Pliskova).

“I think it’s also good for my confidence before Wimbledon.”

The Slovakian said it has taken her longer than she expected to adapt to grass this year. “I was a little bit disappointed (with the way I played) in Nottingham,” she said.

“I didn’t adjust that quickly from clay. But now I’m I’ve found my game and I feel very good on grass.”

She continued, “I’m very pleased. I have good results on grass almost every year. So I really feel confident. It’s my favourite part of the season and for me it would be great if there were more tournaments on grass.”

Rybarikova: it’s never easy to be the favourite 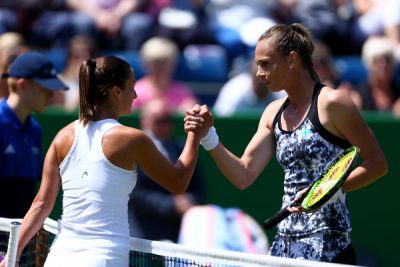 Rybarikova’s opponent, Jakupovic, beat Sachia Vickery and Bernarda Pera in qualifying. She then stunned Elise Mertens in the first round and advanced due to Naomi Osaka’s retirement in the second round.

However, the Slovenian never really threatened to upset the odds against the Slovakian in today’s quarter-final, as the World No.19 controlled the match throughout.

“When you play someone who you should beat, like today for example, it’s obviously different than playing someone like Pliskova,” Rybarikova said.

“I just kept saying myself to stick with the plan. That was working pretty well. It’s never easy to be the favourite, but so many now players can beat Top 10 or Top 20 players, so it’s not a huge surprise (when they do it).”

She continued, “Some players are better ranked, but you feel you can beat them because you have a game for them. Others are lower ranked and you say it’s a very tough for me because I don’t like the way she plays. It’s not always only about rankings.”

Rybarikova’s next match is an intriguing last-four clash with Barbora Strycova. The Czech was 7-5 3-0 up on Lesia Tsurenko when the Ukrainian was forced to retire with a left hip injury.

“Everything is tricky about Barbora because she is an extremely talented player,” the Slovakian said. “I lost to her twice last year and she feels very good here on the grass. So it’s definitely going to be tough.”

Petra Kvitova Closes In On Title Defence In Birmingham