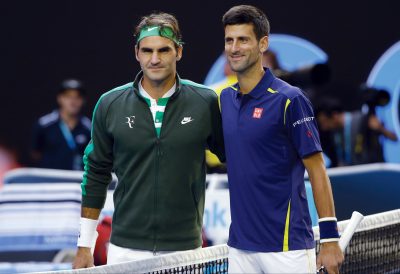 20-time Grand Slam champion Roger Federer’s ex-coach Stefan Edberg has explained why the Swiss superstar failed to win a Major title in 2014 and 2015.

Edberg claimed it was Novak Djokovic, who stopped Federer from winning Grand Slams during those two years. According to the Swedish legend, who coached Federer in 2014 and 2015, Djokovic was slightly better than the Basel native, especially when the two met in Grand Slam finals. Federer lost three consecutive Major finals to the Serbian – a five-set thriller in 2014 at the All England Club and the following year, the maestro was beaten again at the same tournament and then again in New York.

However, Federer eventually went on to add to his Grand Slam haul after making a stunning return to action from a six-month injury layoff by winning the Australian Open and Wimbledon in 2017. Subsequently, Roger went on to defend his title in Melbourne in January, taking his Slam count to 20.

And after skipping the entirety of the European clay-court season, Federer has once again made a superb comeback to the circuit as he regained the No. 1 ranking from arch-rival Rafael Nadal by beating the dangerous Australian Nick Kyrgios in the semifinals of the Mercedes Cup in Stuttgart on Saturday.

“When I joined his team, I felt he could win a Grand Slam,” Edberg told tennis Magazine.

“As you get older, it obviously becomes tougher. But Roger is absolutely without time.

“What he did in the last years is incredible. Two or three years ago he was a little bit unlucky with majors.”

Edberg tipped Federer to remain as one of the big favourites to win Grand Slam titles as long as he continued to compete on the men’s tour. The Swede explained that it was Federer’s low expectations, which have contributed to his remarkable comeback since 2017.

“At the 2017 Australian Open he had the necessary luck,” Edberg added.

“The balls that before went out now were falling on lines. His confidence increased and in the end, he won Wimbledon and Australian Open.

“I don’t think that anyone believed he could do it at his age.

“He may have reduced his expectations, so he got relaxed. Roger is unique in many ways: on the court, but also in treating media and fans.”

Roger Federer Outlasts Nick Kyrgios In The Semifinals of Stuttgart And Returns to No.1 Next Monday

Juan Martin Del Potro pulls out of the Queen’s