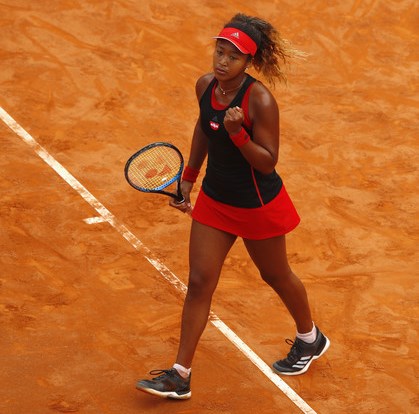 Naomi Osaka produced a blistering performance to swat aside the challenge of Victoria Azarenka 6-0 6-3 in the first round of the Italian Open.

The Japanese, 20, is in the best form of her life in 2018. She beat Simona Halep and Karolina Pliskova en route to her first WTA title in Indian Wells, reached the quarter-final in Dubai and the last 16 in Charleston and at the Australian Open.

And Osaka’s great year continued today. She dominated her more experienced opponent in the opening set as she served well and hit a string of superb winners.

Azarenka briefly threatened a revival by forging a 2-0 lead at the start of the second set. But Osaka was having none of it. She hit the ball hard and deep repeatedly to earn the break back and then went from strength from strength as she sealed a straight-sets win.

This display from the Japanese rising star is even more impressive when you consider that she has previously struggled on clay. In the last four seasons, Osaka’s win-loss record on the surface is 17-15.

However, it is clear from the way she just obliterated a two-time Grand Slam champion in Rome that she can perform well on clay.

And the Japanese may need to play even better to stand a chance in round two as she faces Halep – the World No.1 and best WTA clay court performer. 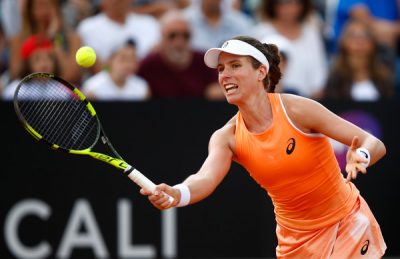 Elsewhere in Rome, Johanna Konta ground out a vital 6-4 6-3 win over Magdalena Rybarikova to book a second round clash with either Su-Wei Hsieh or Aryna Sabalenka.

The Brit, who turns 27 on Thursday, never looked comfortable as she made 40 unforced errors.

However, she battled back from a break down in a tight first set and then repeated the feat during an equally gruelling second set to earn a hard-fought victory after almost two hours on court.

In the top quarter of the draw, Madison Keys produced an impressive display to take down Anastasia Pavlyuchenkova 6-4 6-1.

It was sweet revenge for the American, who lost a tight three-setter to the Russian in Stuttgart. And she will now face Donna Vekic, whose round one exploits were even more remarkable.