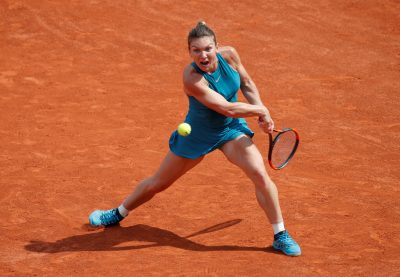 World No. 1 Simona Halep was in imperious form as she put up an exhibition of clay-court tennis, destroying the dangerous Taylor Townsend 6-3, 6-1 in the second round of the French Open on Thursday.

Halep was close to perfection in the encounter, displaying all her skills on the court. The exquisite drop shots, jaw dropping down the line winners, near perfect lobs, everything was thrown at Townsend and she had no answers to the wizardry and guile of Halep.

The former two-time runner-up wasted little time in making a flying start to the match. Halep earned an immediate break of serve in the opening game with a beautiful backhand down the line winner and then backed up the break with a comfortable hold. A little while later, she turned the contest into a procession as she easily grabbed the double break, romping to a 3-0 lead.

Taylor finally found some rhythm on her serve and got on the board in the fifth game. Subsequently, the American fended off a set point to make it 5-2 and then she managed to pile some pressure on the Halep serve in the following game to get one of the breaks back. But, when it looked like Townsend was getting in the groove, Halep raised the level of her game, drilling a crosscourt backhand winner to seal the game and set No. 1 in 35 minutes.

There was no let up from the top seed in the second set as she remained focused on the task in hand. She quickly moved through the gears to grab a 2-1 advantage before upping the pressure on her rival to secure the first break of serve in the fourth game to stretch her lead to 3-1.

It was a heartbreaking game for Townsend as she fought back from 15-40 to make it deuce and had multiple chances to clinch the game. Halep though had other ideas as she continued to mount the offensive, eventually earning the break to put herself in the driver’s seat.

Halep backed up the break with a hold to 15 and moved to within a game of victory after she broke Townsend once again in the sixth game in the 2nd set. The Romanian comfortably served out the match in the next game to complete victory in 68 minutes.