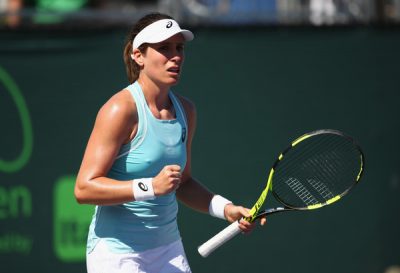 Johanna Konta got her Miami Open title defence off to a good start with a comfortable 6-4 6-3 win over Kirsten Flipkens.

The Brit lost 11 of her last 17 WTA tour matches before today, but she found form against the Belgian and can now look forward confidently to a third round clash with Elise Mertens, who beat Bernarda Pera 7-6(5) 6-3.

It is always important for Konta to serve well, and against Flipkens she did exactly that. The Brit had a first-serve percentage of 69% and won 76% of points on her first serve and 65% on her second serve, which meant she only faced (and saved) one break point in the match.

By dominating on serve, Konta took the pressure off her return game, and she almost earned a break in game five. However, Flipkens dug deep to save five break points.

But the Belgian got herself into trouble in her next service game by serving consecutive double faults to slip down 0-30. And Konta took full advantage, crunching a return that was too hot for Flipkens to handle and then ripping a forehand winner down the line to break to love.

The Brit sealed the first set 6-4 with two more easy holds.  The second set then followed a similar pattern as, after a couple comfortable holds from each player, Konta took charge in game five. 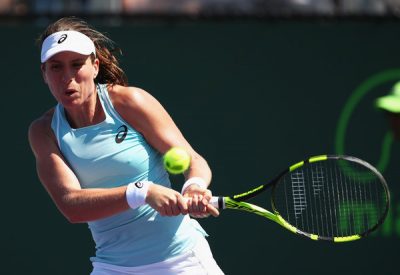 She hit a very deep return that Flipkens could only scoop into the net, then the Belgian double-faulted to make it 0-30. The Brit then drew another error from her opponent with a series of excellent groundstrokes, before pummelling a return straight at Flipkens’ feet to seal the break.

It was a simple route to the finishing line thereafter for Konta, and she clinched victory by breaking Flipkens again in game nine of the second set.

Shock losses for Kasatkina and Vandeweghe

Other seeded players did not fare so well. 19th seed Daria Kasatkina failed to back up her run to the Indian Wells final as she lost 3-6 6-2 6-2 to American youngster Sofia Kenin.