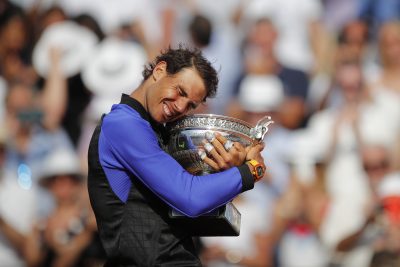 World No. 1 Roger Federer’s ex-coach Stefan Edberg has backed the Swiss maestro’s great rival Rafael Nadal to match his record of 20 Grand Slam titles, the most by a male player in tennis history.

Edberg, a former World No. 1 and a winner of six Majors, who coached Federer from 2013 to 2015, also opined that his former charge was indeed the greatest player of all time. However, he claimed that only two players, Nadal and Novak Djokovic have the potential to equal Federer’s numerous records.

36-year-old Federer has continued to rewrite tennis history, becoming the first man to win 20 Grand Slam titles after winning his sixth Australian Open at the end of January and subsequently overtaking Andre Agassi as the oldest No. 1 player ever by bagging his 97th career title in Rotterdam a few days ago.

And Edberg believes Federer’s never-ending list of records can’t be discredited while having a debate about who is the greatest player of all time. According to him, Federer is the best player ever, but Nadal and Djokovic have age on their side and can match Federer’s lofty achievements in the future.

“There have been a lot of great players throughout but if you look at his (Federer) record, number one (for the longest) number of weeks, the most Grand Slams, he is probably the greatest player of all time,” Edberg said.

“If there is another player who could do the same, it’s Rafael Nadal. He is still young enough to get up there, if he can stay healthy.

“And you have Novak Djokovic, who has won a lot of Grand Slams. Those are the two players who have a chance to get to 20 Grand Slams.

“But it’s a long, long way and it is nearly impossible. Apart from that, it’s going to take another 10-15 years before anybody has a chance to achieve the same.”

“I have seen them all play, from (John) McEnroe and (Bjorn) Borg. He (Federer) probably stands out as of now.

“Roger Federer is quite an astonishing tennis player. To reach number one at this stage (of his career) and at this age, it’s probably like a dream in many ways, maybe for himself.

“He had an opportunity a couple of years ago but Djokovic was too strong and then suddenly what happened after 2016 he had an injury, had to have his operation and had to come back with a fresh mind.

“There were not too many expectations and (look at) the comeback he had. I don’t think anybody could have believed that this could happen.

“Possibly he would have been happy with one Grand Slam more, but now he has won three in 12 months. It’s incredible. It’s almost impossible to do what he has done but he has surprised us.”