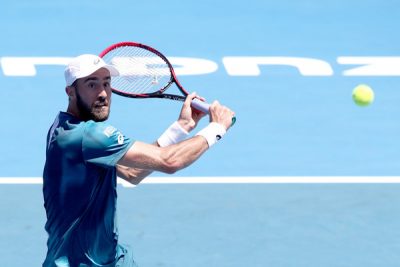 Steve Johnson gained an important victory at the ASB Classic as he beat Lucky Lose Liam Caruana 7-5 7-6(4) in a tight contest.

The world number 46 played Italian Lucky Loser Liam Caruana, who replaced Ryan Harrison in the draw. The match became a tight affair despite the 351 place gap in the ATP world ranking.

However it was the American, who capitalised on his break point opportunities and broke twice in the match to grab a tight 7-5 7-6(4) victory. The win means he will advance to the second round, where he will play fifth seed Roberto Bautista Agut in the second round.

In other results at the ASB Classic, Next Gen Finals winner, Hyeon Chung, grabbed a 6-3 5-7 6-3 victory over American Lucky Loser, Tennys Sandgren. The South Korean broke Sandgren five times as he secured victory in just over two hours.

While Slovakian Lucky Loser, Lukas Lacko defeated Greek talent Stefanos Tsitsipas 6-3 6-7(5) 6-3 to advance to the second round. The world number 90 only lost nine points on serve as he edged out an in-form Tsitsipas.

Here are the other results from Day 2 of the ASB Classic:

‘He Did Everything I did, Only Better’ – Pat Rafter Names The Toughest Rival Of His Career

The two-time grand slam champion opens up about his toughest rivalry as he predicts a bleak outlook for the 2020 tennis season.

Former world No.1 Pat Rafter has named an American tennis legend as the player who he struggled the most against throughout his professional career.

The 47-year-old was a star of Australian tennis during his playing days after achieving a series of milestones. His accolades include becoming the first player from his country in 28 years to reach the top of the ATP rankings in 1999 and becoming the first man to win the Rogers Cup, Cincinnati Masters and US Open within the same year. Rafter is also the last player outside of the Big Three to have won back-to-back US Open titles after triumphing in 1997 and 1998.

Despite his successes, there was one player that caused him difficulty. Rafter played Pete Sampras 16 times on the ATP Tour, but could only win four of those encounters. At one stage he lost to the 14-time grand slam champion eight times in a row.

“The toughest player I played against was definitely Pete Sampras – he did everything I did, only better.” Rafter told Eurosport.
“His record was the best so there’s no doubt about it Sampras the stand-out. I enjoyed playing Andre Agassi the most – I thought we had a really good battle, I really enjoyed playing him.”

The rivalry between the two was tense at times. Highlighted best by their encounter in the 1998 US Open semifinals. Sampras complained of a quadriceps injury following his loss to the Australian. Prompting Rafter to famously say ‘he’s becoming a bit of a crybaby.’ A few months before that comment, he admitted that his relationship with the American wasn’t solid by saying ‘We’re not the best of mates. I wouldn’t go out for a beer with him, put it that way.’

22 years on from the verbal exchange between the two, Rafter now describes it as a thing of the past. Insisting that his rival never took what he said to him ‘personally.’

“I can’t remember the exact words, but we had a run-in in Cincinnati one year – I probably told him to grow up.” He recounted.
“He cracked it when I beat him one time. But that was back in the old days, emotions were running high and don’t take it personally. It’s all good.”

Besides reminiscing about his playing career with Eurosport, Rafter has also predicted a bleak outlook for this year’s tour. All professional tournaments have been suspended until July 13th due to the Covid-19 pandemic. For the first time since 1945 Wimbledon has been cancelled due to the situation.

Many are now speculating as to when it will be possible for the tour to resume. The US Open is still optimistic that they can hold their tournament as scheduled later this summer. Meanwhile, the French Open is set to be played during the later part of September. However, Rafter doubts that either of those tournaments will happen.

“No, I think this (the virus) is going to be around for a long time.” Rafter commented on the chances of the 2020 season resuming. “Until they get a vaccine I can’t see how anyone is going to be playing.’
“Personally, I think it’ll be like the flu and we’ll have to get used to it.”

Potentially one solution for the tournaments would be to host matches without spectators. In order to minimise the risk of the virus spreading. An approach that has already been taken by other sports such as football. However, Wimbledon refused to consider that option this year.

“I think they could. No spectators. Sure. No ball-boys – I’d love to see the players pick up the balls themselves!” he concluded.

The bad boy of tennis says he will support those in need by delivering essential supplies. 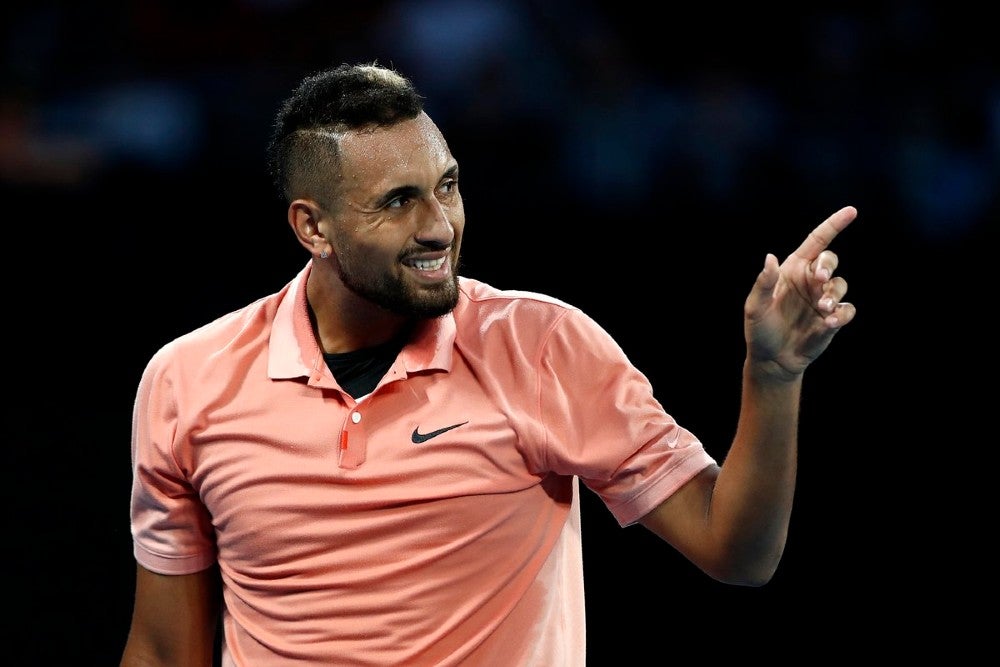 Former top 20 player Nick Kyrgios has urged members of the public to reach out to him if they require any help during the covid-19 pandemic in a social media post.

The two-time grand slam quarter-finalist has offered to deliver food to those who are struggling during the current crises, which has suspended the ATP and WTA Tours until at least July. It is estimated by economists that more than 500,000 people in Kyrgios’ home country of Australia will lose their jobs due to the outbreak. There have been more than one million cases of the coronavirus worldwide with many countries currently placed in a lockdown in a bid to halt the spread of the virus.

‘If ANYONE is not working/not getting an income and runs out of food, or times are just tough… please don’t go to sleep with an empty stomach,’ Kyrgios wrote on Instagram.
‘Don’t be afraid or embarrassed to send me a private message. I will be more than happy to share whatever I have.
‘Even just for a box of noodles, a loaf of bread or some milk. I will drop it off at your doorstep, no questions asked.’

In Australia there have been 5687 cases of Coronavirus as of Sunday which has resulted in 34 deaths. This is according to figures provided by chief medical officer Professor Brendan Murphy.

It is not the first time Kyrgios has offered to support those in need. Earlier this year he was an instrumental figure in helping raising money for the Australian bushfire appeal. Donating AUS$200 for every ace produced during the first month of the season and participating in a series of exhibition matches. According to 7 News, Kyrgios raised in the region of AUS$100,000 for the bushfire fund.

Kyrgios is currently ranked 40th in the world and has won six out of his nine matches played earlier this season. At the Australian Open he reached the fourth round before falling in four sets to Rafael Nadal.

The top-20 player pays tribute to the three tennis legends as he cast his vote in the greatest of all time debate. 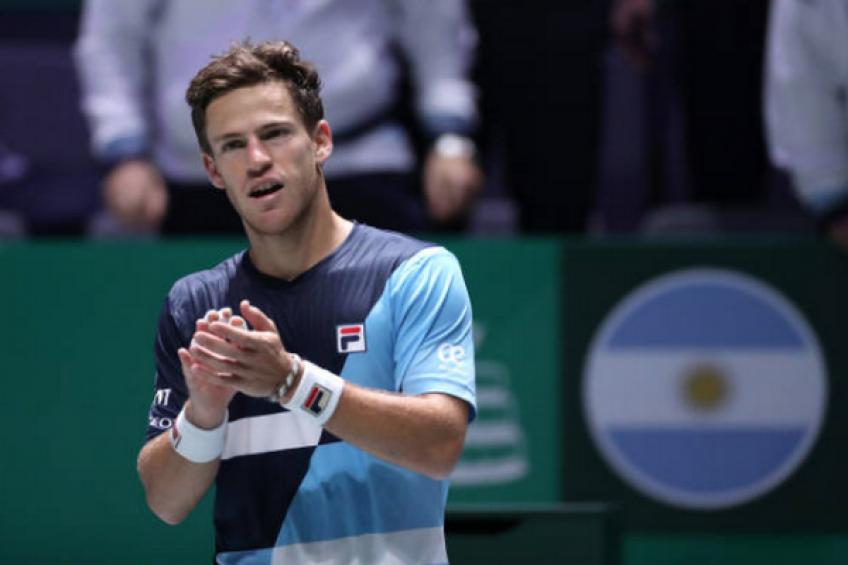 When it comes to taking on the Big Three in tennis, Diego Schwartzman is perhaps one of the best players to provide an insight into how frustrating it can be.

The Argentine world No.13 has played a member of the illustrious trio no less than 18 times in his career, but is yet to gain a single victory to his name. Consisting of Roger Federer, Novak Djokovic and Rafael Nadal, the big three have dominated men’s tennis in recent years. Between them, they have won the last 13 grand slams and at least one of them has featured in 58 out of the past 60 major finals. Since February 2004, Andy Murray is the only player outside of the group to have held the No.1 position.

Schwzrtman’s record against the big guns has seen him lose to Nadal nine times as well as succumbing to both Djokovic and Federer on four occasions. Nevertheless, the three-time grand slam quarter-finalist isn’t bitter as he hails their achievements in the sport.

“Against Nadal you always come in hope of giving him a fight on any day and on any surface, but you quickly realize that it is almost impossible to defeat him.” Schwartzman said during an Instagram live chat with journalist Danny Miche.
“Djokovic makes me feel that in the second game of service I no longer have lungs. It’s unbelievable.’
“Federer gives you more air (time), but you don’t seem to know how to play tennis. It’s amazing how he hits the ball.’
“The three are unbelievable, in different ways.”

There is also the ongoing debate as to who should be named the greatest of all time. Each player has their own credentials. Federer currently has the all-time lead for most grand slam titles at 20. Nadal has won more ATP tournaments on the clay than any other player in history. Meanwhile, current world No.1 Djokovic has won more prize money in the sport than any other player – male or female.

Weighing on the debate, Schwartzman has given the edge to Djokovic. Prior to the suspension of the tour due to covid-19, Djokovic started 2020 by winning 18 matches in a row. Claiming titles at the ATP Cup, Australian Open and Dubai Tennis Championships.

“At his best, Djokovic has beaten Rafael Nadal many times on the clay and Roger Federer many times on the grass. So maybe I would say that he is slightly above the other two.” He explained.
“Let’s see if you can reach the records, now it was packed and saw that pace being broken. But Djokovic knows that he has to keep the level, because if he doesn’t win he will win the other two.”

Schwartzman started the year by winning nine out of 14 matches played. His best performance of the season so far took place on home territory when he reached the final of the Cordoba Open before losing to Christian Garin.