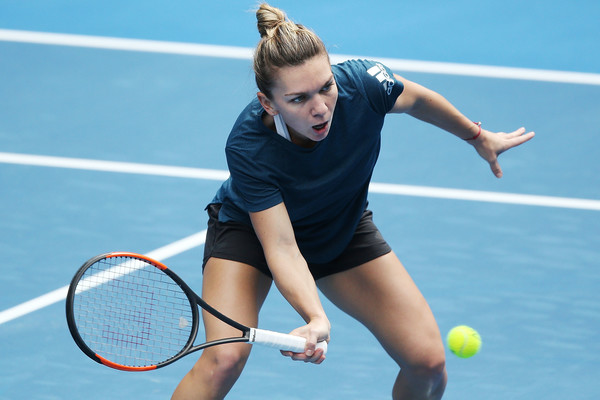 The draw for the 2018 Australian Open has been made and reigning world number one Simona Halep could face Garbine Muguruza in the semifinals, whilst Elina Svitolina and Caroline Wozniacki are also on course to meet in the last four.

With seven-time Australian Open champion Serena Williams missing her fourth successive Grand Slam tournament, there will be a new champion in Melbourne and six players have the chance to become the world number one.

The world number one, Simona Halep is bidding to win her first Grand Slam singles title in Melbourne, and she has a tricky path of becoming the last woman standing, whilst Caroline Wozniacki is back at world number two in the world, she will be looking to seize the opportunity of winning an elusive major as she has been handed a relatively kind draw.

Top seed Halep has not won a match in Melbourne since reaching the quarterfinals in 2015 as she has suffered first round defeats in her last two visits. The two-time Australian Open quarterfinalist opens her campaign against Australian wildcard Destanee Aiava. Two-time Wimbledon champion Petra Kvitova, the 27th seed could await in the third round, and either Australia’s 18th seed Ashleigh Barty and or No.16 seed Elena Vesnina could be Halep’s fourth round opponent.

Former world number one Karolina Pliskova, the sixth seed could be Halep’s potential quarterfinal opponent in Melbourne. The Czech faces Veronica Cepede Royg in the first round, and the Paraguayan almost upset Pliskova on Court Suzanne Lenglen at the French Open last year. Pliskova could face fellow Czech, the No.29 seed Lucie Safarova in the third round, and a mouthwatering clash with ninth seed Johanna Konta could be on the cards in round four.

Second seed Wozniacki can ease her way into the tournament as she faces Romania’s Mihaela Buzarnescu. It is a winnable first round match for the 2011 semifinalist. Should the Dane advance she could face 15th seed Anastasia Pavlyuchenkova, who reached the quarterfinals last year, completing her set of reaching the quarterfinals at every Grand Slam.

French Open champion Jelena Ostapenko, the seventh seed or last year’s semifinalist Coco Vandeweghe, seeded 10th could prove to be a tricky obstacle for Wozniacki to overcome in the quarterfinals. Ostapenko defeated the Dane in three sets in the quarterfinals en route to winning Roland Garros last June, and Vandeweghe overpowered the second seed in their fourth round encounter at Wimbledon last year.

Third seed  Garbine Muguruza has a nightmare mini-section of the draw to deal with as she aims to win her first Grand Slam hardcourt title. She begins her campaign against a French wildcard in Jessika Ponchet. Should she progress, the two-time major winner could face 26th seed Agnieszka Radwanska, a two-time semifinalist in Melbourne in the last four years in the third round, a resurgent 2016 Australian Open champion Angelique Kerber or 2008 winner Maria Sharapova could be formidable fourth round opponents.

Sharapova faces Germany’s Tatjana Maria in the first round, and she could face 14th seed Anastasia Sevastova in the second round. The Latvian upset the five-time Grand Slam winner in their fourth round clash at the US Open last year.

Last year’s runner-up Venus Williams has a mouthwatering first round clash with Belinda Bencic. The Swiss won the Hopman Cup with Roger Federer on Sunday but it could be an omen for the seven-time Grand Slam winner as her sister Serena defeated Bencic in the first round last year, and went on to win the title.

Williams could face 31st Ekaterina Makarova, who is a regular fixture in the latter stages in Melbourne in the third round and either the in-form 12th seed Julia Goerges or Australia’s 23rd seed Daria Gavrilova in round four.

Fourth seed Elina Svitolina could meet Williams in the quarterfinals but she opens her campaign against a qualifier, and should she reach the second round, the Ukranian will have to be on the top of her game, when she faces Maria Sakkari or Katerina Siniakova. US Open champion Sloane Stephens, seeded 13th could meet Svitolina in round four.

The Australian Open gets underway on Monday 15th January.