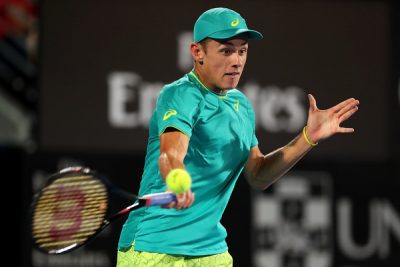 Alex De Minaur only dropped two games in the last two sets as he eased past Benoit Paire 4-6 6-1 6-1 to reach his maiden ATP final at the Sydney International.

The young Australian did look nervous at the start of the match as he looked to make the final in front of his own fans. Eventually Paire forced errors out of De Minaur and reaped his rewards in the ninth game as he grabbed the break for a 5-4 lead. The Australian was very erratic in the opening set as he produced errors from all angles. The Frenchman wrapped up the first set in 45 minutes.

However De Minaur used the first set as motivation for the next two sets and in the second set the Australian became clinical and stepped up his game. He took both of his break point opportunities as he raced into a 5-1 lead against an erratic Paire. The current world number 167 served out the set in 25 minutes to force a decider.

The 18 year old broke in the first game of the third to continue his frighteningly quick momentum. The decider took longer as Paire tested the Australian’s nerve several times during the set. However it didn’t count for anything as De Minaur secured another break for a 4-1 lead. On his third match point De Minaur secured victory in sensational circumstances to reach his first ATP final:

The Aussie will now play Russian Daniil Medvedev in the final as he overcame Fabio Fognini 2-6 6-4 6-1 in just under two hours. Medvedev broke four times as he frustrated the Italian seal his place in the final against De Minaur. Tomorrow’s final will be the first meeting between De Minaur and Medvedev.