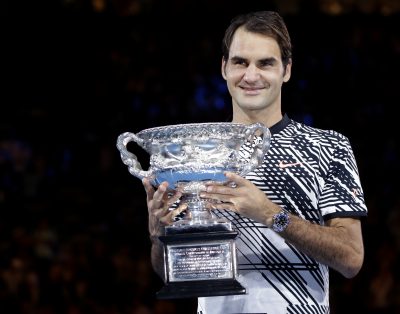 ATP Tour chief Chris Kermode has claimed that 19-time Grand Slam champion Roger Federer’s knee injury that forced the Swiss superstar to spend six-months of 2016 on the bench could have dramatic consequences for the men’s game.

Kermode was appointed as the ATP’s Chief Executive Officer (CEO) after Brad Drewett passed away in 2013 as he lost his battle with motor-neurone disease.

Federer, who was forced to end his 2016 season because of a chronic knee issue made a stunning comeback to the men’s circuit in 2017, winning the Australian Open and Wimbledon and collecting a tour-best seven titles. However, to achieve such great success, Federer opted not to play on the clay courts of Europe during the summer.

And according to Kermode, Federer’s decision could be emulated by many players, especially the ones who will be making their respective comebacks in 2018. 12-time Major winner Novak Djokovic, British No. 1 Andy Murray, former World No. 3 Stan Wawrinka are the big names who will be back in action after their forced exile from the game due to their injuries.

He told Sky Sports: “I think this is the most unusual year we’ve ever had, and it’s a combination of the tour’s set plans before I was in charge, over 10 years ago, to enable a system with giving older players exemptions from certain Masters Series events so if they hit three different sets of criteria they can play three less Masters than everyone else.

“What that has done is enabled players to play older and longer, which was the intention, but what people didn’t see was that, with that, players are older and they’re going to get more injured. It’s that debate about whether it’s better to have Roger playing at 36 years old – is that good for the game but he’s going to play less and really work his calendar to reduce the number of matches, or do you have a system where people are playing at full pelt, overplaying and getting injured?

“This is the first year that I think we’ve had such high profile players being injured. That’s what has caused the story because, overall, the tour injuries are down six per cent. It’s a strange conundrum going on.

“It is something we need to keep looking at and reviewing and we’ve got huge medical teams looking at a large amount of data. What is causing injuries – is it that from a young age players haven’t been educated enough about hip injuries and stretching? Is it changes of balls across different surfaces and swings? Is it changing the surface?

“When you speak to most players, they’ll probably say it’s the surface change that causes a lot of the injuries. So rather than saying hard courts are more brutal on the body, maybe if everyone all played on the hard, maybe you would have fewer injuries. But then you get criticised because the game becomes homogenised and there are different styles of play and different speeds. It’s a constant balancing act.

“With all these injuries there’s a ‘is there a culture being formulated by Roger that he can take the time off’ that is different to the guys who are actually injured. Dipping in and out and taking the time off, I think that only happens when you are 36 and only happens when you are reaching Grand Slam finals so you reach that amount of points to remain at the top of the ATP rankings. That will only apply to very few players who are going to stay up there. That’s why people will play to keep their ranking up.

“The injuries are a different one. Players have had surgeries and I think we mix the Roger with the injuries and they are very different.”