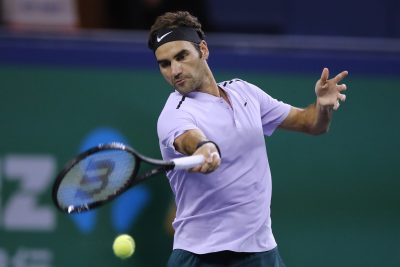 19-time Grand Slam champion and former World No. 1 Roger Federer has made a shocking revelation that he thought about hanging his racket after accomplishing his lifelong dream of becoming the top-ranked player in the world in 2004.

“After becoming the number one in 2004, I actually considered quitting,” he said. “I had accomplished everything I had set out to. But I told myself that I can continue playing because I don’t have to prove anything anymore.”

The Swiss great had a stellar 2017, winning a fifth Australian Open crown and a record eighth Wimbledon title, three Masters 1000 events and achieved a rare 4-0 winning record against his arch-rival Rafael Nadal. While Federer dominated the Spanish Bull with successive victories in Melbourne, Indian Wells, Miami and Shanghai, Rafa secured the year-end World No. 1 ranking. Federer though, insisted that it wasn’t his priority anymore.

He said: “Look, it’s not a realistic goal in some ways, the world number one. It is interesting. It’s the ultimate achievement in tennis in some ways, it always has been for me. But at this age, it just can’t be because I think I’ll make mistakes if I start chasing it.

Meanwhile, the 36-year-old was also quizzed about his retirement plans and he had this to say: “I know it (retirement) is sooner or later. I know I’m not 22 anymore, but I don’t have a date. If the body allows me to play, my family allows me to play, if the success is still there, if I’m happy to travel, I will continue. But the four things have to work, if one of the four doesn’t work, it maybe the time to stop. But for now, it’s ok.”

“For me, I have come to realise that sometimes less is more. Today I think when I take enough rest, feel hungry and have the fire, then it’s the one I can play my best. I want to make sure I’m happy to be on the court and happy to do press. It’s like if I do too much, the fire is like Juuuu … it goes away. So for me, the family is my priority and then the rest,” Federer explained.

I expect greatness from Djokovic, Murray and Wawrinka: Federer

When Roger Federer was insulted by a tennis coach