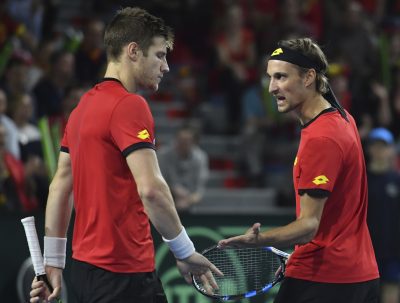 Belgium’s David Goffin and Jo-Wilfried Tsonga of France accomplished comfortable victories on Friday to leave the Davis Cup final evenly balanced at 1-1 going into Saturday’s crucial doubles rubber. Will the pair of Richard Gasquet and Pierre-Hugues Herbert be able to hand over the advantage to the hosts by winning the match or will the duo of Ruben Bemelmans and Joris de Loore power the Belgians to a 2-1 lead this afternoon?

Saturday’s pivotal doubles rubber will see the French team of Gasquet and Herbert, a surprise combination chosen by their captain Yannick Noah taking on Belgium’s Bemelmans and De Loore. While it is true that neither of the two combinations participated in the semifinals, still the Belgian decision to bring in De Loore in place of Arthur de Greef is reasonably understandable whereas the French change is quite baffling to say the least.

Noah’s decision to opt for Gasquet at the expense of Nicolas Mahut hasn’t gone unnoticed in the media and the people are questioning his decision even before the start of the rubber. And it is quite normal to see the fans react in such a manner because Mahut is one of the finest doubles players of the current era and secondly, why would you chose a combination of players that have never played before for such an important clash.

One of the greatest exponents of doubles play, World No. 6, Mahut has been a regular member of the French Davis Cup squad, appearing in all three earlier rounds, and triumphing in all three doubles’ rubbers. Mahut joined forces with Herbert twice to defeat Japan and Serbia and then partnered Julien Benneteau to beat Great Britain in the quarters. Mahut’s ouster is all the more surprising considering the fact that Herbert had recently withdrawn from the ATP Finals citing a lower back injury and will enter the vital doubles encounter with some questions to answer about his fitness.

On the other hand, the Belgians opted for Bemelmans and De Loore for the doubles. The pair participated in the initial two rounds, registering a huge win over the Zverev brothers in the first round against Germany in Frankfurt. De Loore couldn’t play in the semis against Australia due to a knee injury that needed a surgery in September. He hasn’t played any form of competitive tennis since then, but Belgians believe that he has trained extremely hard to regain his spot in the squad.

With the home crowd right behind them, France would definitely have a slight edge over the Belgian duo. However, had the French stuck to Mahut and Herbert as a pair, they would have been overwhelming favorites to win this rubber. But, Noah’s big change has given Belgium a real opportunity to gain the upper hand in the tie. At the moment France can only hope that both Gasquet and Herbert will be able to strike a chemistry to prevent an upset on Saturday.