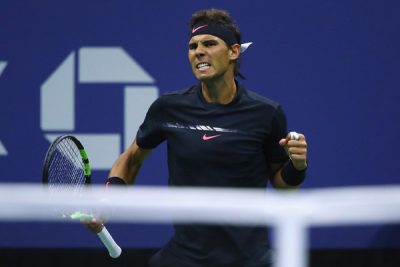 Both men started the match with great authority as they looked to establish dominance. Nadal looked to target Del Potro’s weaker forehand while the Argentinian began to fire down his big serves and already began his ace count. However Del Potro was slowly beginning to break the Nadal serve down and a lucky net cord saw the Argentinian do that for a 3-2 lead.

Despite some difficulty the Argentinian consolidated to the delight of the hostile crowd. Despite Nadal producing some of the shots of the tournament it came to no avail as Del Potro crushed his way to the first set as he took it 6-4 in 51 minutes.

However the Spaniard hadn’t won 15 grand slams for nothing and was back to his brilliant and measured best. Nadal broke a tired looking Del Potro in the second game to gain a 2-0 lead.

Rafa then held comfortably as he piled the pressure on the Argentinian. Nadal’s confidence was at an all time high as the Del Potro forehand was starting to misfire. The Spaniard broke another two times as he raced to the second set 6-0.

Del Potro was struggling physically and this proved evident in the third set. The World number one produced a moment of absolute magic to break to make it eight games in a row. All of the sudden the Argentinian looked average and needed inspiration.

Del Potro managed to gather inspiration as he held serve for the first time in 45 minutes. Despite the 2009 champion’s steady momentum, the Spaniard was one step ahead as he grabbed the third set to take a 2 sets to 1 lead after two hours of play.

Del Potro tried to begin the fourth set with as much energy as he could muster, however this was a match too far as the greatest competitor in tennis took advantage. Nadal broke in the third game for a 2-1 lead as he showed no mercy on a wounded Juan Martin Del Potro. A further break of serve sealed the match for the world number one as he completed victory in just over 2 hours and 30 minutes.

Here is what Rafael Nadal said after the match:

Rafael Nadal will hope to end his 44 month drought of not winning a hard court title against Kevin Anderson on Sunday in the US Open final.

Related Topics:2017 US OpenJuan Martin Del PotroRafael Nadal
Up Next