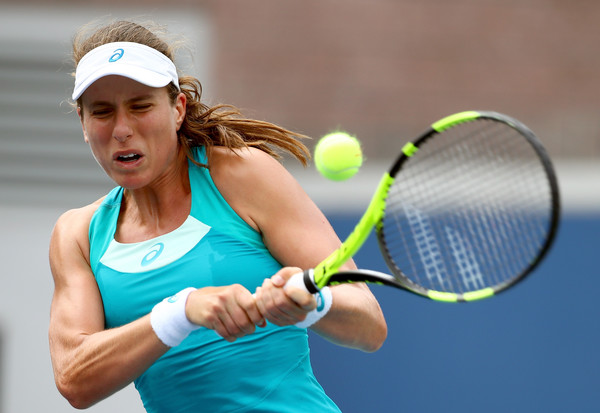 British number one Johanna Konta became the heaviest casualty on day one at the US Open as she was outclassed by Serbia’s Aleksandra Krunic.

The world number 78 recovered from two breaks down in the opening set to give world number seven Konta a scare before the Brit managed to edge over the line in set number one. The level of tennis which the Serb had produced in flashes midway through the first set resurfaced in the final three games of the second and through much of the decider as one break in each set was enough to get Krunic over the line.

This win marks just the second top 10 win of her career and afterwards the Serb was delighted with the level of tennis she had produced. She said: “I feel amazing obviously. I’m happy with the way I played and with the way I fought. She’s an awesome player so I had to be at my best from the first point.”

Meanwhile, Heather Watson also left Flushing Meadows much earlier than she would have liked after losing in the first round at the US Open for the seventh year in a row. The British number two succumbed to world number 46 Alize Cornet this time around in straight sets 6-4, 6-4.

Konta asserted her dominance early on in the contest, breaking her opponent in the third game with a backhand return of serve winner up the line following a double fault and forehand unforced error from her Serbian opponent.

The British number one was seemingly cruising towards taking the opening set after securing a double break to take a 4-1 lead, but Krunic began to raise her level. The Serb secured one of the breaks back with some brave hitting, taking on a backhand down the line to leave Konta flat footed as it clipped the top of the tape on its way to being a winner. With Konta’s lead now reduced to just one game nerves got the better of the Brit as a couple of double faults and rushed points left the Brit facing two more break points. The recent Wimbledon semi-finalist saved the first with a trademark backhand down the line winner, but that weapon let her down on the following point as the Serb levelled the score at four games all.

With momentum on her side it came as a big surprise that Krunic’s level suddenly dropped dramatically, with a double fault and poor unforced errors leaving her 0-40 down. Konta took full advantage and broke her opponent to love before closing out the set in a far more comfortable service game than her two prior ones to take the first set 6-4.

Konta had opportunities to stamp her authority on the match early in the second set but was unable to capitalise on two break point chances in Krunic’s opening service game, or another chance in the third game. Those missed opportunities came back to bite the Brit and helped the Serb grow in confidence with her game.

The seventh seed came through a marathon game on serve to level up at 3-3 but only won one point thereafter as Krunic took complete control. Konta’s groundstrokes became erratic and she failed to make returns of serve back onto court as two holds to love helped the Serb take the set 6-3 to force a decider out on Grandstand.

Having played one of her worst sets of tennis in her year to date Konta struggled to regroup early in the final set as a double fault left her down a break at 2-1. With the prospect of securing the biggest win in her career since defeating then world number four Petra Kvitova in New York in 2014, the moment looked to get a bit too much for the Serb. Krunic was brave and did well to stave off three break points, but her opponent was not to be denied at the fourth time of asking as the seventh seed ripped a cross court backhand winner to get back on even terms.

The Serb did not fade away despite losing her advantage and broke once more to pile the pressure on Konta, who had reached the fourth round here the past two years. There was to be no comeback from the world number seven this time around as Krunic wrapped up victory in two hours and 16 minutes 4-6, 6-3, 6-4.

Watson was always going to be facing a stern test against an opponent ranked 28 places above her in the WTA World Rankings and could not have got off to worse start, dropping serve in the opening game of the match.

The Brit had half a chance to break back in the sixth game up 0-30 and at deuce on her opponent’s serve, but Cornet, once ranked as high as 11 in the world, dug deep and kept Watson frustrated as she clung on to her break advantage.

Serving to stay in the match, Watson saved three set points in the ninth game with a couple of unreturned serves and a backhand down the line winner. The Brit then had half a chance to break back at 15-30, but the Frenchwoman hung tough as she had done throughout the match so far to seal the set 6-4.

There was to be no Big Apple dreaming for the Brit as Watson found no great joy in the second set either. Despite hanging in with her opponent up to four games all, the Brit’s game collapsed at a crucial time. The British number two squandered several game points, hitting a double fault to let one slip by before a few errors resulted in her serve being broken leaving Cornet to serve for the match.

The Frenchwoman looked solid from the baseline throughout the match and used that to full advantage, closing out the set and the match to complete a 6-4, 6-4 victory after one hour and 36 minutes of match play out on Court 4.