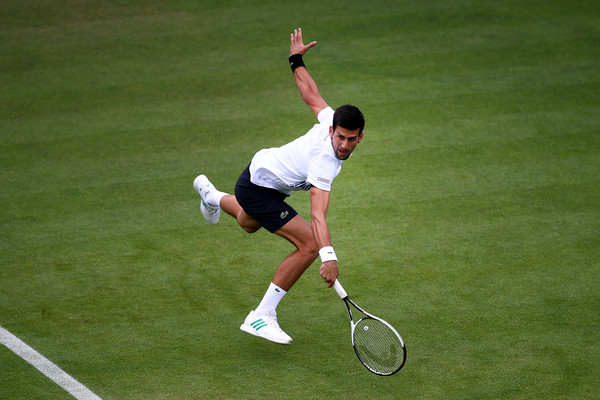 Novak Djokovic advanced to the semifinals at the Aegon International in Eastbourne after coming through a tough test against Donald Young 6-2, 7-6(9) as his preparations for Wimbledon continue.

The top seed looked back to his best and perfectly at home on the grass in the opening set, racing through it only dropping three points on serve to take it 6-2. The second set was a rather different story as Young grew in confidence and earned the chance to serve for the second set at 5-4. The American had a set point then and a couple more in the tiebreak, but Djokovic held his nerve and finally got over the line on his fourth match point to extend his time by the seaside in his first trip to Eastbourne.

Prior to this match on Centre Court, second seed Gael Monfils completed his second round match with a 6-3, 6-2 win over British wildcard Cameron Norrie. The two players managed 45 minutes court time on Wednesday evening and returned Thursday morning with the Frenchman leading by a set and a break 6-3, 2-1. Norrie had half a chance to break back immediately at 15-30 on his opponent’s serve, but the second seed responded to hold to stay in front. The 21-year-old Brit secured his first ever ATP World Tour level win a few days ago with victory over Horacio Zeballos, but was outhit by the second seed in this match. Monfils secured a second break in the seventh game on his third opportunity and served it out with an ace on his second match point to seal a quarterfinal place.

Monfils will now face former Wimbledon quarterfinalist Bernard Tomic later on Thursday after the Australian ran out a comfortable winner over sixth seed Mischa Zverev 6-3, 6-2 in just 50 minutes. Seventh seed Richard Gasquet also booked his place in the last eight with a 6-4, 6-4 win over Kevin Anderson and will now meet third seed John Isner, who came through a tough battle against Dusan Lajovic 3-6, 7-6(2), 7-6(4). In the other matches held over from yesterday, defending champion Steve Johnson saw off qualifier Thomas Fabbiano in three sets 6-3, 5-7, 6-4 to set up a meeting with Daniil Medvedev, who recovered from a set down to defeat Robin Haase 4-6, 6-1, 6-2.

In the first men’s quarterfinal match of the day in front of a sell out crowd, top seed Djokovic started out strongly on serve and had three break point opportunities in the fourth game at 0-40. An ace, followed by an unreturned second serve, followed by an unreturned first serve kept Young in the game. The American did extremely well to raise his level and make it five points in a row to stay with the world number four early on.

Young could not hold off the 12-time Grand Slam champion for long as the Serb secured the first break of serve in the sixth game after his opponent went well wide with an aggressive forehand. After an encouraging start Young struggled to stay with the top seed from the back of the court and soon faced two set points on his own serve. Djokovic only needed one, securing the set 6-2 after 26 minutes with a forehand winner which landed on the baseline. The former world number one was growing in confidence all the time playing in his first Wimbledon warm-up event since 2010, only losing two points behind his first serve and one behind his second over the course of the opening set.

A lapse in concentration in the third game of the second set left Djokovic facing a first break point in the match, but the Serb refocused, hitting an unreturned first serve before holding to stay in front. With that rare opportunity passing the American by, his standard of play dropped on serve, with a double fault leaving Young having to save two break points against him. Young, also a quarterfinalist at Queen’s last week, responded very well under pressure, serving his way out of trouble to win the next two points and save a third break point before holding to level at two games all.

After a series of service holds it was the top seed who next faced adversity on serve in the ninth game, facing two break points. Agonisingly for Young, sensing the importance of the moment in the match, he tentatively struck backhands into the net on both points to squander the chance. A double fault from the Serb gifted the American a third bite at the cherry and this time he took it after Djokovic went long with a backhand slice.

Serving to level at one set all, a double fault left Young down 15-30, but the American responded to move to set point. Djokovic held firm and prevented his opponent from taking them into a final set before converting on his second break point in the game to restore parity and level at five games all.

A hold to love from the top seed made it six points in a row, but a strong response from Young, finishing with a 93mph forehand winner took the players into a tiebreak.

A double fault from Djokovic instantly handed the mini break to his opponent, but the world number four swiftly levelled the scores. Young pushed in front again to take a 5-3 advantage before the world number four came back once again to level at 5-5. A well executed backhand cross court winner brought up a second set point for the American, which the top seed duly saved with an unreturned serve.

After the second change of ends Djokovic earned his first match point but missed a backhand to keep the crowd on the edge of their seats in the tiebreak. A backhand down the line winner brought a second match point, this time on the top seed’s own serve, but once again he could not get over the line. A third match point also went begging as the players changed ends once again at nine points apiece. The most untimely of double faults from Young gave Djokovic a fourth chance and this time he took with an unreturned first serve to secure a place in the semifinals against either Johnson or Medvedev.