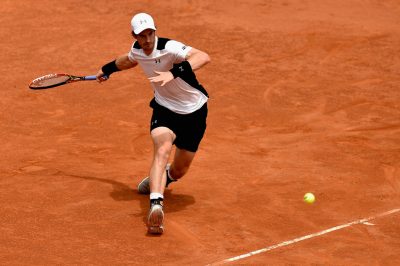 Can Andy Murray defend his title in Rome? (Zimbio)

Andy Murray and Novak Djokovic suffered tough draws ahead of the masters 1000 event in Rome.

The first quarter of the Rome draw sees the world number one and defending champion Andy Murray. The struggling Brit could have a tricky match in his first match as Rome champion as he could face erratic Italian Fabio Fognini in the second round. Fognini will have to get past fellow Italian Matteo Berretini first before setting up a blockbuster match with Murray. Also in this half of the draw we have the dangerous youngster Alexander Zverev, he will face a qualifier in round one and could set up a possible second round with Viktor Troicki.

Tomas Berdych and Milos Raonic complete the seeds in this quarter. Berdych has got Mischa Zverev and could face Robin Haas in round two, while Milos Raonic will play either Tommy Haas or Ivo Karlovic in a second round match.

Given the form Murray is in you would have to say he is a draw loser in this instance with the likes of Alexander Zverev and Milos Raonic lurking in this section of the draw.

In the other quarter of the top half of the draw we have Stan Wawrinka, the third seed in Rome. He would of liked a good draw this week, however he could face the man that beat him in Madrid, Benoit Paire. The controversial Frenchman will have to get past compatriot Nicolas Mahut before meeting Wawrinka for a second week in a row. Also in the Wawrinka section of this quarter you have an all German match between Florian Mayer and Phillip Kohlschreiber, with the winner playing the returning John Isner or 14th seed Albert Ramos-Viñolas.

In the other section we have ninth seed David Goffin, who is one of the best clay court players on tour right now, he has a qualifier in the first round. If Goffin was to win he would play either Fernando Verdasco or Donald Young. Completing this quarter sees Ryan Harrison facing a qualifier with the winner facing sixth seed Marin Cilic.

A draw winner here would be David Goffin, given his form and the fact that Marin Cilic is a favourable draw to have considering the Croat isn’t best suited to this surface. You wouldn’t bet against the Belgian reaching the quarterfinals in Rome.

The bottom half of the draw opens up with eighth seed Dominic Thiem, who looks dangerous once again on the European red clay courts. However he could open up against dangerous Uruguayan Pablo Cuevas, who is looking dangerous in Madrid. Should Thiem reach the third round he could face Lucas Pouille, who plays Sam Querrey in the first round. Pouille could play controversial Australian Bernard Tomic in round two.

In the other part of this quarter we have 13th seed Jack Sock who will play Argentinian Diego Schwartzman. The winner of this contest will play the winner of Dan Evans’ match with Jiri Vesely. The king of clay Rafael Nadal closes out the seeds in this quarter and will face either Andreas Seppi or a qualifier.

Nadal is certainly a draw winner here until the quarterfinals where Thiem or Cuevas could await the red hot Spaniard.

Kei Nishikori is the opening seed in this quarter, he might be a doubt going into Rome after suffering wrist inflammation, but if he does play he will play the winner of the all Spanish clash between David Ferrer and Feliciano Lopez. It is a loaded part of the quarter this as 10th seed Grigor Dimitrov will play Juan Martin Del Potro. The winner plays either Joao Sousa or Kyle Edmund.

15th seed Pablo Carreño Busta is also in this quarter he has a brutal test against Gilles Simon awaiting in the first round, with a match against Nick Kyrgios or Roberto Bautista Agut awaiting the winner. Novak Djokovic closes the draw out, he plays Gianluca Mager or a qualifier in the second round.

In this fun section of the draw it is anyone’s game. You would have to favour Grigor Dimitrov or Pablo Carreño Busta to challenge Novak Djokovic, although despite his state of mind don’t count out the dangerous Nick Kyrgios.

Five Things To Know About The Nadal-Thiem Madrid Final

Rafael Nadal Muscles His Way To A Djokovic Showdown In Madrid