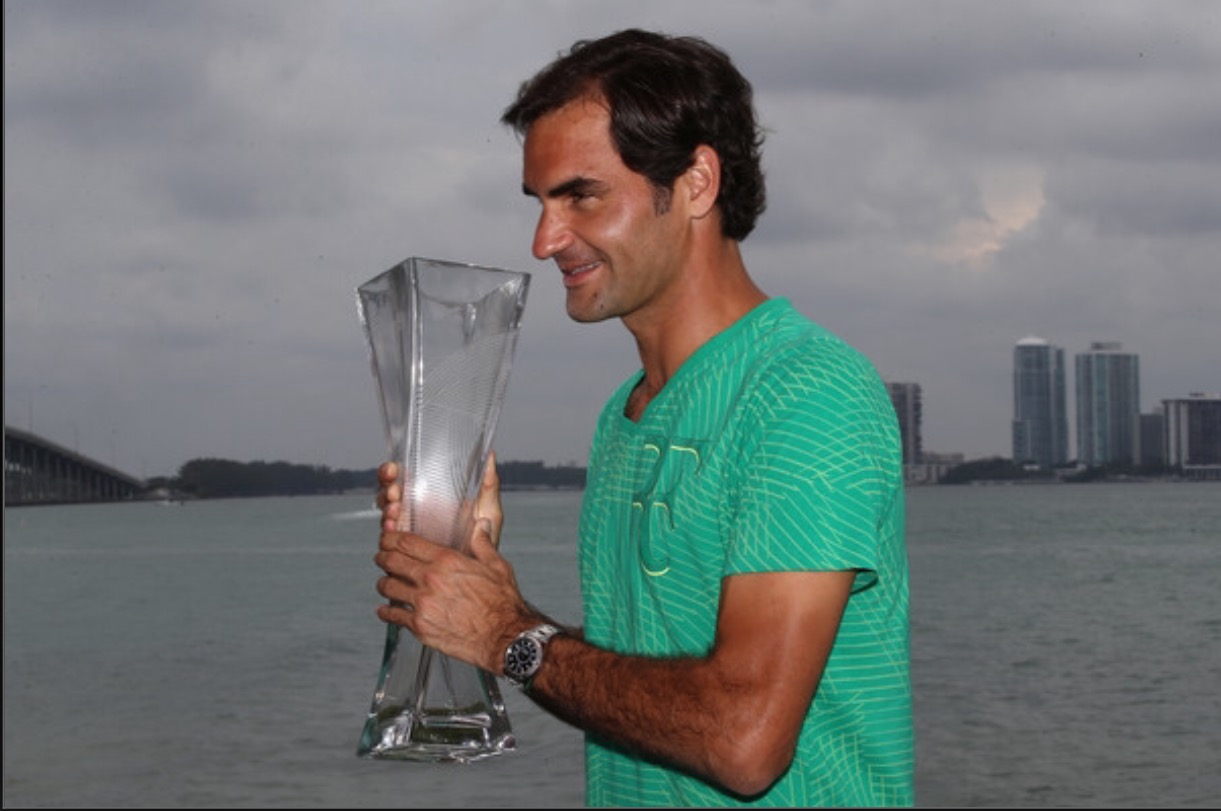 Following the Miami Open, Roger Federer’s rise up the rankings has continued and it was also a profitable week for Fabio Fognini. Meanwhile, three American’s have made significant climbs in the rankings, making them the biggest movers of the week. Here are the latest updates on the Emirates ATP Rankings and the Race To London.

The Miami Open concluded on Sunday, with Roger Federer being crowned as the champion after he defeated Rafael Nadal 6-3, 6-4. The Swiss completed the ‘Sunshine Double’ for the second time in his career following his victory in Indian Wells a couple of weeks ago. These points, added to his Australian Open triumph in January, have seen him rise two places in the rankings, up to four in the world.

Perhaps what is more notable for Federer is the lead which he is enjoying at the top of Race To London rankings. Based on this season’s results alone, the Swiss boasts three titles and a 20-1 record, meaning that he is already sitting on 4,045 points, 1810 points clear of Nadal, who sits in second place. Just to put into context how far ahead he is of the world’s current top two player’s in the world, Andy Murray and Novak Djokovic, the Brit is currently 12th in the race with 840 points. What comes as more of a surprise is that Djokovic, who completed the sunshine double last season, as well as winning in Melbourne, is down at 22nd in the race and only has 475 points, 3,570 less than Federer.

It is no secret that Federer has desires to get back to the top of the rankings and that is certainly a possibility for the 18-time Grand Slam champion this year. The Swiss trails world number one Murray by 6,655 points as it stands, but the Brit has plenty of points to defend in the coming months having won in Rome, Queen’s Club and Wimbledon last year, as well as reaching the final at the French Open and in Madrid. By contrast, Federer has little points to defend and can make up plenty of ground, even if he is to skip the Masters 1000 series events in Monte-Carlo, Madrid and Rome, which he hinted at after his victory in Miami.

Nadal may have suffered defeat in a final for the third time this season (Australian Open, Acapulco, Miami), but there are plenty of positives to take as he heads into the clay court season, a surface which he can very much dominate on. The Spaniard has climbed two places in the world rankings up to fifth, overtaking Milos Raonic and Kei Nishikori, who has slipped three places having failed to defends his points in Miami.

It was Fabio Fognini who ousted Nishikori last week at the quarterfinal stages, making it a memorable event for the Italian, who celebrated reaching just the second Masters 1000 series semifinal of his career. It did not go as well as he would have liked when going up against Nadal, leaving the court having suffered a 6-1, 7-5 defeat, but the Italian will benefit from a big boost in his ranking. Fognini has climbed back into the world’s top 30, ranked at 28, climbing 12 places.

It was also a great week for three Americans, all of which have enjoyed significant improvements in their rankings. Donald Young is getting back to the level which he showed five years ago. The 27-year-old reached the last 16 in Indian Wells and backed up that performance in Miami, also reaching the last 16, before succumbing to Fognini 6-0, 6-4. That achievement has seen Young move up nine places up to world number 42, just four places shy of his career high ranking of 38, which he reached way back in February 2012.

Young’s compatriot Jared Donaldson also had a memorable fortnight on home soil after he also reached the last 16. The 20-year-old saved three match points against young British talent Kyle Edmund in round one and rolled on from there, eventually being halted by fellow American Jack Sock, who won 6-2, 6-1. These results have taken the young American firmly inside the world’s top 100, up 20 places to a career high ranking of 75. Donaldson is the biggest mover of the week.

19-year-old Frances Tiafoe has also shown a lot of potential of late and put in a highly commendable performance against Federer in the second round, particularly in the first set, as he fell to the Swiss 7-6(2), 6-3. Tiafoe is back inside the world’s top 100 this week, climbing 12 places back up to 89, three places below his career high ranking which he reached one month ago.

The ATP World Tour now takes a week’s break, but will return on April 10th with ATP 250 level events taking place in Houston and Marrakech, meaning that there are plenty of points on offer to those just below the upper echelons of the game who are looking to improve their ranking.