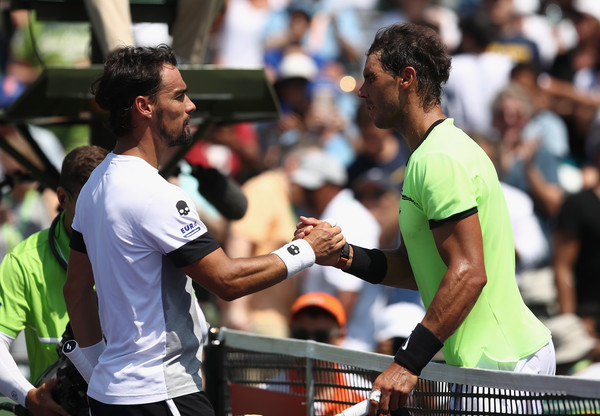 Rafael Nadal booked his place in his fifth Miami Open final after seeing off Fabio Fognini in straight sets 6-1, 7-5 in one hour and 30 minutes.

The Spaniard looked solid as a rock on serve and did not face any break points throughout the match. The fifth seed raced away with the opening set as Fognini appeared to be hampered by an arm injury which prevented him from hitting through the ball. The Italian showed great resistance in the second set and continued to hold serve despite facing break points, but it always looked to be the case of when and not if he would drop serve. Nadal made the breakthrough he had been craving in the eleventh game and had no trouble closing out the match.

Heading into this contest Nadal was seeking to reach his fifth final in Miami, while Fognini was looking to become the first Italian in history to reach the final. The Spaniard led their head to head 7-3 and made it three wins in a row over the Italian, who had caused him some problems in the past, but not on this occasion.

Nadal made a strong start, dropping just one point on his own serve in his opening couple of service games. The fifth seed led 0-30 in his opponent’s first service game and pushed him to deuce, but was unable to capitalise on this occasion. The next time Fognini stepped up to the line the Italian threw in an awful service game, packed with unforced errors as he dropped serve to love. 10 points in a row quickly took the Spaniard into a 4-1 lead.

In the next game, Fognini, who was appearing in just his second semifinal at a Masters 1000 level event, had a strong lead on serve, but allowed Nadal to work his way back in and earn a shot at securing a double break. In the rally which then ensued the Spaniard was at his best on the defence, making the Italian play one more ball, which led to Fognini dumping his attempted overhead into the net.

With the double break secured, Nadal held firm on serve, winning 83% of points behind his second serve, compared to just 11% for Fognini. The fifth seed closed out the first set 6-1 after just 25 minutes.

Things looked to be going from bad to worse for Fognini at the start of the second set as he returned from his bathroom break to find himself having to face break point. The Italian found the mark with his first serve as Nadal hit the net with his return and he was able to escape with the hold.

Fognini continued to struggle on serve but managed to hold on, saving a break point the next time he served, before securing another hold in a marathon fifth game, which lasted over nine minutes.

In the eighth game Nadal faced his toughest challenge on serve in the match after Fognini strung together a couple of good points to move to 30-30. The Italian was inches away from earning his first break point opportunity of the match after his attempted backhand cross court pass went just wide, getting caught by the wind at the last moment. The Italian managed to push his opponent to deuce but the Spaniard held firm and levelled the score at 4-4.

With that opportunity having passed Fognini by, it proved to be his final stand. The Italian recovered from 0-30 to get to 30-30 and narrowly missed a forehand which have brought up game point. Following that miss, Fognini double faulted to hand the break to Nadal, granting him the chance to serve for the match.

Nadal duly obliged and closed out the match to love, finishing with an unreturned serve to book his place in the final. The Spaniard dominated on serve throughout the match, winning 83% of points behind his first serve and 80% of points behind his second serve. The fifth seed will be hoping to go one step further this year and lift the trophy for the first time when he faces Roger Federer on Sunday.

Roger Federer: “I don’t feel too much I deserved to win”