Davis Cup: Kyrgios and Thompson give Australia a 2-0 lead over the Czech Republic - UBITENNIS

In Melbourne, the first day of the tie between Australia and the Czech Republic ends with a authoritative  2-0 lead for the hosting team 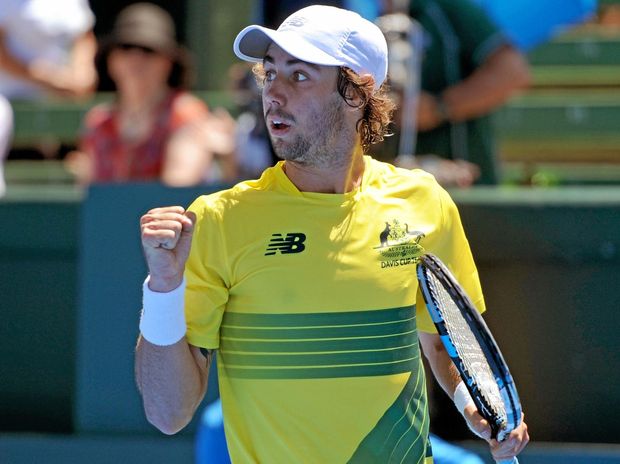 On the plexicushion surface of the central court at Kooyong Lawn Tennis Club on Plexicushion – home of the Australian Open from 1972 to 1987 – the casual way Nick Kyrgios dismissed Jan Satral does not surprise anybody;  it does – not so much for the end result as for the way the match unfolded- Jordan Thompson’s 3 sets dispatch of Jiri Vesely in just over one hour an a half. Tomorrow’s doubles, where John Peers, recent winner of the Australian Open doubles title with Groth will face Stepanek and Kolar, is a good chance for Australia to close the file and relax waiting for the winner the United States and Switzerland, that is … the US, given that Federer and Wawrinka are not competing.

A beautiful summer day, but sparse crowd at Kooyong: it’s Friday morning and the school year has just begun, that basically leaves retirees to attend the first rubbers. There’s excitement for Jordan Thompson’s debut in the Davis Cup. Thompson is currently ATP n.65 and coming from a good start of the season, with QF at Brisbane where he defeated Ferrer, and a second round at the Australian Open where he lost in 4 sets to Thiem. The opponent is the left-handed Czech Vesely ATP 54.

It’s 11AM and Thompson literally blasts off, winning eight of the first 10 points and immediately breaking Vesely’s serve. “Just to get off to a great start and break first game and then hold gave me a lot of confidence, and really relaxed me and I think I really took it from there and sort of ran away with the match,” said the laconic Thompson at the press conference after the game. Thomspon served really well in the first set (72% first serve and 90% points won) controlling the rally, while Vesely collects too many unforced errors. The set point comes after a half hour: Thompson takes command of the rally with a backhand down the line followed by an inside-out forehand on which little can the Czech do. The set ends 6-3 without too many emotions.

The script does not change in the second set with Thompson ruling the court with his forehand (16 forehand winners in the match), getting the break at the eighth game and taking the set at the first set point, with a forehand attack followed by a forehand slap from one meter from the net: 6-3.

There’s more match in the third set, with Vesely managing to level from a break down and move to 4 all,  only to lose serve immediately after. At 5-4 and serve, Thompson does not miss the chance and closes the rubber, sealing it with an ace and then pointing to the tattoo on his bicep (Australian coat of arms and Olympic rings), before hi-fiving captain Lleyton Hewitt and team mates. It’s barely past lunchtime and Australia is already ahead 1-0. A majestic performance by Thompson, with 20 winners and a great pace, while Vesely was frankly disappointing, looking out of shape and slacking, unable to contrast the opponent’s forehand, committing 46 unforced errors and winning only 36 % of the points on his second serve.

It’s 1: 45 when Satral takes to court looking quite resigned before even starting the match, while Kyrgios displays his  usual gansta rapper walk and face, which obviously intimidates the Czech, who is unable to make a point on the Nick’s first service game, then misses an easy attack from the service box, and finds himself 0-3 after 9 minutes.

Kyrgios has another break point at 4-1, which he does not convert, but still grabs the set in less than half an hour, breaking Satral’s serve again with a cross-court backhand. The second and third sets are photocopies with Kyrgios flying to 3-0 and then controlling, displaying hat tricks and sloppy mistakes, like a backhand volley on  open-court on the fourth match point on his serve (he had had already 3 at 5-1 ). At the sixth match point Satral sends wide an easy backhand and the show is over in  1h 35′. A rather boring match with Kyrgios doing his homework (21 ace with an average first 200 km / h and maximum 223 km / h, 15 winners and 19 unforced errors) while Satral (n.157 of world, defeated by Italian Vanni in the qualifying tournament for the Australian Open) showed all his limits, not showing up in the statistics (the same number of winners and unforced errors as the Aussie), but in the inability to take control of the rally and suffering constantly the pressure by the Australian “bad boy”. After the match after Kyrgios thanked the captain Lleyton Hewitt “he is the main reason I’m here today“. Is it a flirt by someone desperately seeking a coach? “Very happy to be 2-nil up”, says Hewitt “I have enough experience in Davis to know that you can not take anything for granted. Nick was fantastic today and was ultra professional in everything he did“. It is 3:30, let’s get home for tea time.