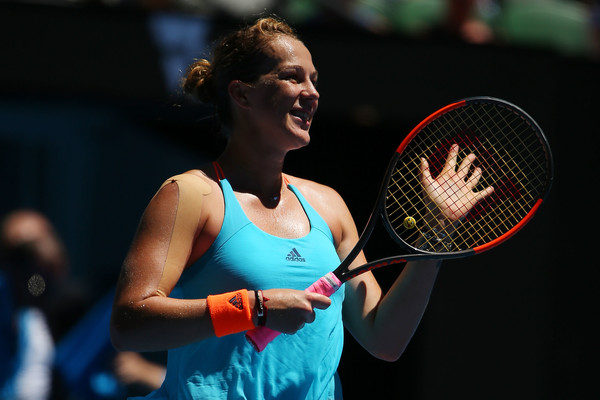 From the start, Anastasia Pavlyuchenkova was looking the stronger and better player, as she went a break up right from the start. At 4-1, “Pavs” struck again, broke to 5-1 and was serving for the set. Svetlana Kuznetsova took one break back, but Pavlyuchenkova didn’t allow a significant comeback. The lower-ranked Russian was serving for the set at 5-3, and on her third set point, she succeeded. Second set started with another early break from Pavlyuchenkova, but Kuznetsova drew it back to 3-3, spicing it up with some drama. “Pavs” took the break for 4-3, but Kuznetsova really fought valiantly in the last game, going through 4 deuces and saving a match point before finally losing after an hour and 10 minutes, 3-6 3-6. With this match, the head-to-head is 5-3 for Kuznetsova, with Pavlyuchenkova winning the last two matches. These were Pavlyuchenkova’s after match comments:

“I take it. I mean, it’s super exciting. I’m so happy. Yeah, I was always wondering why I could never have a good start here in Australia after good pre-season, good off-season, and a lot of practicing,”

“But now it seems like I found a way, and I’m super excited to still be in the second week here.

“I have a lot of memories, because I, yeah, won it twice in juniors and was showing some good tennis, as well, also in the pros, but never achieved something, like, big here.

“It’s one of my favorite Grand Slams. I’m super excited. But I’m also happy now, same time, looking forward to the next one and I want to do even better.”

Venus Williams will attempt to stop the streaking Pavlyuchenkova in the quarterfinals. The 7 time Grand Slam champion has been taking care of business in straight sets, as she was gifted with an incredibly weak draw, not facing an opponent from the Top 95 (Highest Kozlova at #98).Mona Barthel may have had to qualify for this Australian Open, she has a career high of being No. 23 in the world, just returning after a bad year. She is known to be especially dangerous early in the year, but sort of fades back as the season wears on. The German showed form in Melbourne as she dominated the qualifying, and in the main draw defeated Destanee Aiava, Olympic champion Monica Puig and fan favorite Ash Barty. First set brought a surprising amount of breaks for two tall players, but it was Venus who came out on top, winning the first set 6-3. Second set had more stability which was expected between these two players. Barthel was keeping up with Venus, but she got tight at 5-5 and dropped the break. Venus then served the match out after 1 hour and 38 minutes. The American then commented on her opponent suffering from chronic fatigue through 2016:

“I know what it’s like to be down on your luck, but she knows how to play tennis and she’s experienced,” Williams said.

“We’d played a couple of tough matches before so today I expected to have some competition.”

Angelique Kerber Crashes Out Of The Australian Open