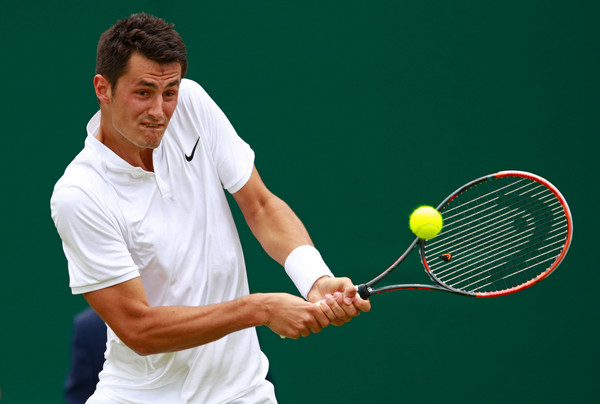 The 8th seed Dominic Thiem only started his match against Florian Mayer yesterday. Their match was interrupted with rain today as well, but Thiem managed to keep himself above his tough opponent. Mayer defeated Thiem just two weeks earlier, in the semifinals of Halle. The German ended up the surprise winner of the tournament.

“I was really not scared, but I had a lot of respect from him,” he said. “I was really, really happy when I made the match point, because he won a 500 [tournament] on grass. Beat five really good players on the way. It was for sure one of the toughest draws in the first round for me.”

Thiem kept his cool, and in all three sets he was in control and the better player. The scoreline read 7-5 6-4 6-4 for the young Austrian. His next opponent will be also a young player, Jiri Vesely of Czech Republic. Vesely defeated the Dutch Igor Sijsling 6-2 6-4 7-6(7).

19th seed Bernard Tomic came out today to come to a conclusion in the first round match against Fernando Verdasco. Today the play started with the fifth set, and Tomic broke for 4-2. Verdasco got a 0-40 lead on Tomic’s serve to make it 4-4, but Tomic kept on fighting and kept the lead. He won the final set 6-4. The final scoreline read 4-6 6-3 6-3 3-6 6-4 and pure match play time was 2 hours and 50 minutes. However Tomic will be far more exhausted, having to be constantly ready to play with the rain delays.

“I was a bit tired in the fourth set and was happy to get the chance to stop,” he said. “But it also makes it tough because you have to go to sleep with one set to go and then you need to come out playing well.”

The Australian had solid results on grass prior to this tournament, reaching semifinals of Queen’s Club. En route to that result he defeated 3 quality grass player, one of them being Verdasco. Tomic’s next opponent will be Moldavian qualifier Radu Albot. Albot got through an equally matched opponent Gastao Elias in four sets.

Easiest of the matches was definitely for Alexander Zverev. The German young star reached finals of the tournament at Halle, falling to Florian Mayer. Zverev is the 24th seed at Wimbledon, and got by with a smooth win over Paul-Henri Mathieu 6-3 6-4 6-2. Zverev was going into the match today with a 3-0 lead in the third set, and made sure to finish strong. Zverev will face either Mikhail Youzhny or Horacio Zeballos in the second round.

The most experienced of the seeded players playing today, 10th seed Tomas Berdych was finishing off his match against Ivan Dodig. Berdych was leading 4-1 in the fourth set, but Dodig did not give up and kept on fighting. The Croat broke back, but two more breaks came and Berdych had his first match point. Dodig saved it and saved another at 5-6. Berdych finally finished the match, winning 7-2 in the tiebreak. 7-6(5) 5-7 6-1 7-6(2) was the final score of the match after 3 hours and 20 minutes for Berdych. The Czech No. 1 will face Benjamin Becker in the second round.

Andy Murray follows Kei Nishikori into third round at Wimbledon