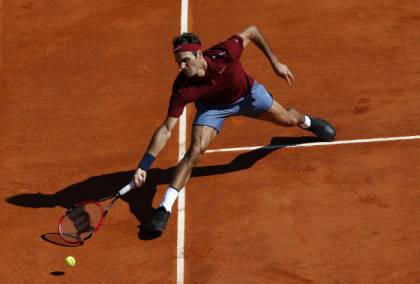 Roger Federer beat Roberto Bautista Agut 6-2 6-4 in one hour and 8 minutes to reach the quarter final in the Monte-Carlo Rolex Masters.

Both players held their first service games in the first three games. Bautista Agut went up 15-30 on Federer’s serve but the Swiss Maestro held his service game for 2-2.

Federer converted his third break point chance in the fifth game to take a 3-2 lead and backed up the break in the next game for 4-2. The 17-time Grand Slam champion got the double break for 5-2. He rallied from 0-30 to serve out for the first set in 32 minutes on his second set point. Federer won his 11th consecutive set in five head.to-head matches against Bautista Agut. Federer dropped just seven points on his serve and did not face any break points in the opening set.

Federer saved three break points at 0-40 in the first game of the second set by winning five consecutive points to draw level to 1-1. The World Number 3 got the break to love in the 8th game for 5-3 and earned three match points. He made a double fault on his first match point but served out at the second time of asking after 68 minutes.

Federer will face either Jo Wilfried Tsonga or Lucas Pouille in the quarter finals.