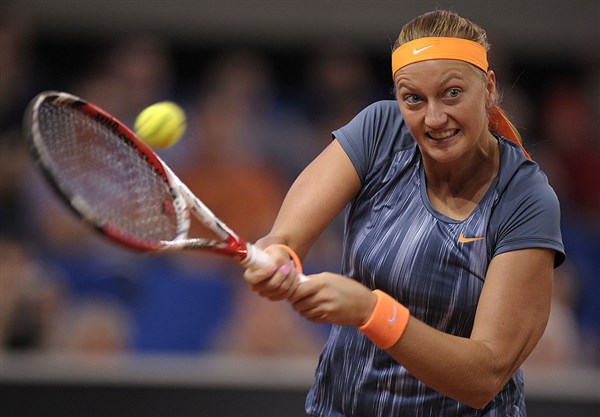 Petra Kvitova breezed her way past US 19-year-old qualifier Louisa Chirico 6-0 6-0 in just 55 minutes at the Porsche Tennis Indoor Grand Prix in Stuttgart. The one-sided match has set the two-time Wimbledon champion up with a second-round match against either Monica Niculescu or Caroline Garcia.

Kvitova, who is now coached by Frantisek Cermak, broke serve three times in the second, fourth and sixth games of both sets. Chirico earned her only chance to break serve at 0-3 in the second set but was not able to convert it.

After a difficult start to her 2016 season, Kvitova achieved her best result so far this year at Indian Wells where she reached the quarterfinals before losing to Agnieszka Radwanska. During her career, the Czech has enjoyed strong results at the German tournament, reaching the semifinal in 2012 and the quarterfinal in 2013.

Chirico reached the Main Draw after beating Camila Giorgi in straight sets in the qualifying round. The US player recently made the third round in Charleston, where she was defeated by Daria Kasatkina.

German Annika Beck beat Italian lucky-loser Camila Giorgi 6-4 6-2 in 1 hour and 39 minutes. Giorgi did not convert her first break point in the second game of the opening set. Beck got the first break on her sixth break point for 4-3 as Giorgi hit her backhand into the net in the seventh game at 40-40 after a long game at deuce. At 3-5 Giorgi held her serve by saving two set points but failed to convert three break points from 0-40 as Beck was serving for the set. Beck closed out the first set on her third match point.

In the second set Giorgi failed to convert a break point for 2-0. The Italian player had to save two break points in her service game.

Beck, who is coached by Italian trainer Francesco Aldi, won five consecutive games with a double break for 3-2 with a down the line forehand winner and 5-2. The German earned a match point with an ace and sealed the win on a return error from Giorgi.

Beck saved all the seven break point chances she faced. She has set herself up with a second round match against defending champion and this year’s Australian Open champion Angelique Kerber.