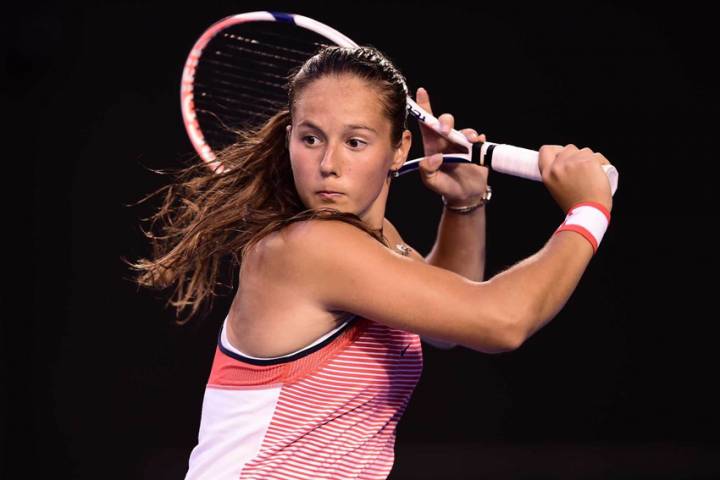 Hantuchova saved two break points at the start of the second set but dropped her serve in the third game. The former top-ten from Slovakia did not convert a point for 4-2 before Kasatkina broke serve to love in the next game. As Hantuchova served to stay in the match, Kasatkina rallied from 0-40 but the Slovakian player held her serve. Kasatkina converted the first of her three match points to serve out for the match.

The young Russian player has advanced for the first time in a Premier Mandatory. She will face number 6 seed Carla Suarez Navarro, who won her biggest title in Doha last month.

Kasatkina, who was born in Togliatty on 7th May 1997, scored the biggest win of her career last January when she beat Venus Williams 6-7 (4-7) 6-3 6-3 in the first round at the ASB Classic in Auckland. She lost in the third round to Serena Williams at this year’s Australian Open. She lost to another teenager Belinda Bencic 4-6 3-6 in the semifinal at St. Petersburg. In the Russian tournament Kasatkina beat former Australian Open finalist Dominika Cibulkova 4-6 7-5 6-3.

Kasatkina and her doubles partner Elena Vesnina broke Martina Hingis and Sania Mirza’s winning streak record of 41 consecutive doubles matches at the Qatar Open in Doha where they reached the semifinals. In the Doha singles tournament Kasatkina lost to Roberta Vinci 6-2 4-6 6-7 (3-7) after earning three match points in the third set.

For the first time since 2009, there are three teenagers inside the top 50. Kasatkina has joined this exclusive club together with Belinda Bencic (finalist in St. Petersburg) and Jelena Ostapenko (finalist in Doha).

Kasatkina climbed nearly 300 ranking places between 2014 and 2015 to reach world number 72 and was nominated for the WTA Newcomer of the Year Award. During the 2015 season Kasatkina won five ITF titles and won her first WTA main draw match last July in Bad Gastein. She beat Alexandra Krunic before reaching the quarter finals where she pushed Sara Errani to three sets. Kasatkina reached the third round at the 2015 US Open in her first Grand Slam tournament and qualified for the semifinal at the Premier tournament in Moscow. She came through three qualifying rounds before beating two top-30 players Carla Suarez Navarro and Irina Camelia Begu.

Kasatkina has risen 36 places in the WTA Ranking in the first two months of 2016. Kasatkina was introduced to tennis by her brother at the age of six. Her favourite stroke is her forehand. Her favourite surface is clay. A trademark of her game is her ability to come forward and close out points at the net.

It was the second consecutive first-round defeat for Hantuchova, who won the Indian Wells tournament twice in 2007 and 2007.

“It’s the first time here and I am really happy to be here. It’s always difficult to play your first match of the tournament, especially against such a good player like Daniela and it’s my first match on such a good court. I didn’t know I am playing against Suarez Navarro because I didn’t see the draw. Carla is playing well and won her last tournament, so I have to play my best tennis to beat her”, said Kasatkina.

In other matches of the first round at Indian Wells Margarita Gasparyan beat Olga Govortsova 6-1 6-3 setting up a second round match against St. Petersburg champion and Number 9 seed Roberta Vinci. Annika Beck defeated Bethanie Mattek Sands 6-2 6-2. This year’s Australian Open quarter finalist Zhang Shuai battled past Pauline Parmentier in a close first-set tie-break before the French player was forced to withdraw from the match due to a respiratory problem.