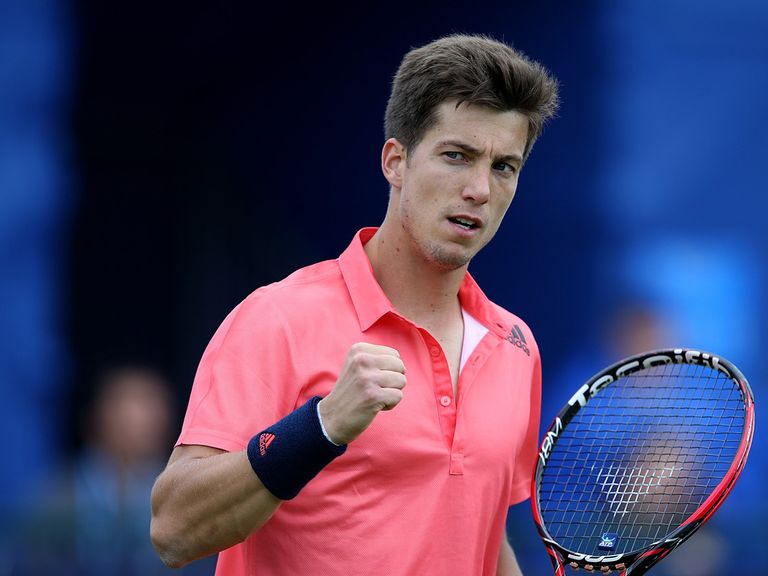 Defending champion Aljaz Bedene is now the only seed still standing in the Irving Challenger, though the fourth seed was given a massive scare by young American Frances Tiafoe, eventually prevailing 7-6, 3-6, 7-6.

The Briton was forced to go to three sets for the second straight match (Bedene defeated Dmitry Tursunov in three sets in the second round). The British world no. 51 was matched by Tiafoe in the first, as they traded breaks before the higher-ranked player won the tiebreak 7-5. Far from being deterred, Tiafoe took heart from his strong performance, breaking early in the second, and survived a Bedene recovery to level the score at a set apiece. Both men struggled to put their first serves in play, with neither able to average above 50% over the course of the match. It ultimately came down to the fact that Bedene proved marginally better on second serve, allowing the 2015 winner to edge another tiebreak to reach the semi-finals.

His opponent will be another American teen in Jared Donaldson. The right-hander produced a dominant display to defeat fellow young gun Andrey Rublev 6-4, 6-1. Donaldson broke at five-four in the first set, and served out for the lead. Donaldson missed a chance to break in the game of the second set. It would turn out to be the only game that Rublev would win in the second, as Donaldson raced through the next six games without reply. If Donaldson could continue his fine form this week, he could push much closer to the Top 100 with a maximum of 125 points on offer for the winner this week.

Marcel Granollers, a former Top 20 star, dismissed third seed Lukas Rosol in straight sets, 6-4, 6-2. In a match littered with unforced errors from the thirty-year old Czech, Granollers managed to maintain respectable numbers from his side of the court to reach the semi-finals.

His opponent will be either Ivan Dodig, the big-serving Croatian, or Diego Schwartzman, an Argentinian who has proven more at home on clay than on hard-courts. 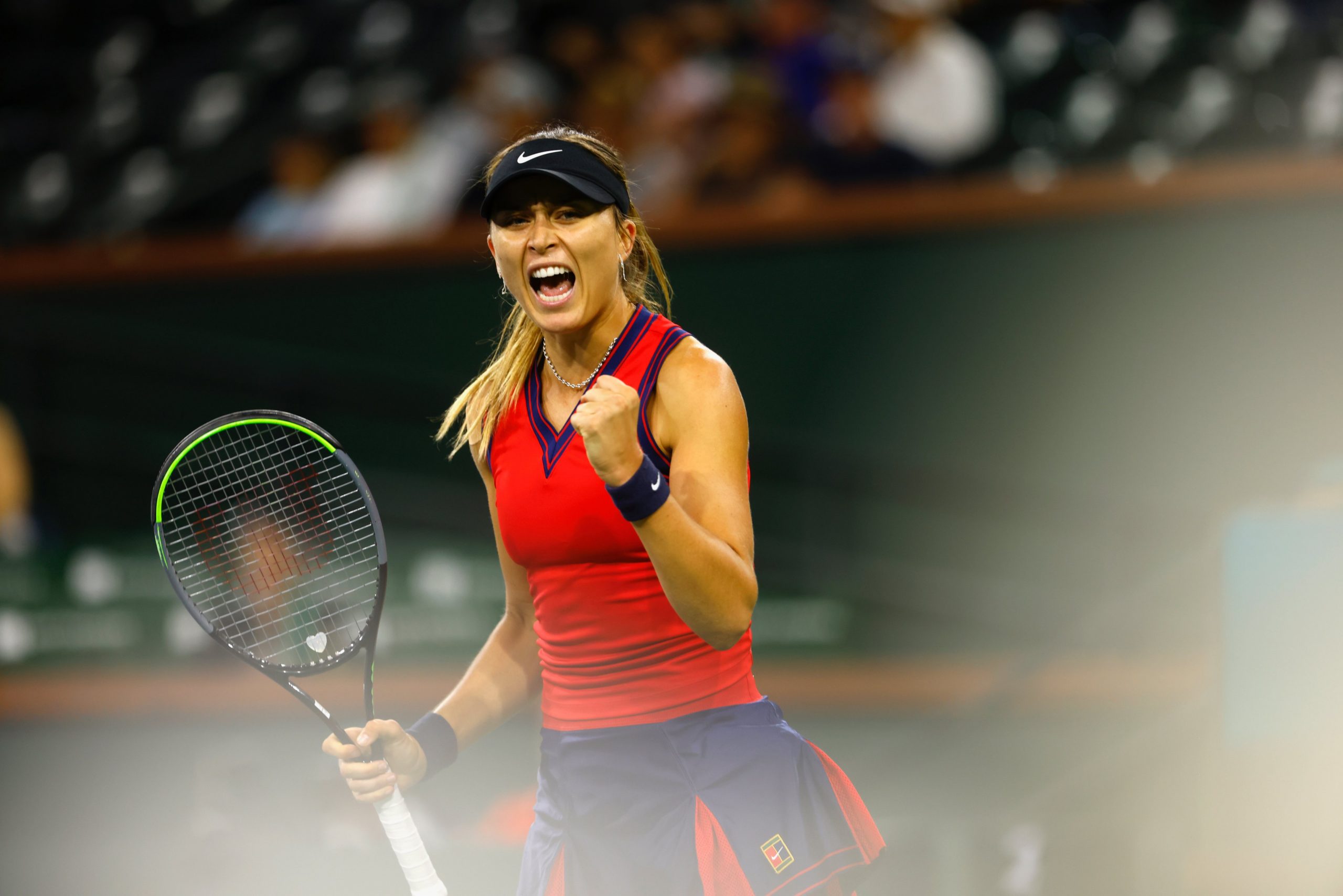 Sunday’s men’s and women’s singles championship matches feature a two-time champion and three first-time finalists at this level.  Victoria Azarenka won this event in 2012 and 2016, two of 10 WTA 1000 titles to her credit.  Paula Badosa, Cam Norrie, and Nikolaz Basilashvili are all vying for the biggest title of their careers, during what has become their best seasons to date.

For Azarenka, this result is a bit of a surprise, despite all she’s achieved in the sport.  Her record of 28-8 is more than solid, but she’s dealt with multiple injuries throughout 2021, forcing her to withdraw during five different events.  This is her first final since nearly a full year ago in Ostrava.

For Badosa, this result has been expected for some time.  She’s been most impressive this season, accumulating 40 match wins, and a record of 10-3 against the top 20.  Paula herself will debut inside the top 20 on Monday, and would be just a few points shy of the top 10 with a win on Sunday.

Azarenka will attempt to win her first final since April of 2016.  While she was the champion of last year’s Western & Southern Open, she received a walkover in the championship match from Naomi Osaka.  Vika is 0-3 in her last three finals, all on hard courts.  This is only the second WTA final for Badosa, who claimed the title in Belgrade this past May on clay.  Based on the way the Spaniard has been clubbing her groundstrokes, and her comfort level on these slow-playing courts, I’m going with Badosa to win the second title of her young career.

Norrie has been one of the most surprising and remarkable stories of 2021.  Prior to this season, he had never been ranked inside the top 40.  But like Badosa, he will debut in the top 20 on Monday, thanks to a record of 46-20 on the year.

Basilashvili has made news for other reasons, as he was arrested last year on domestic abuse allegations from his former wife.  On the tennis court, he’s been quite streaky this season.  Between January and March, he went on a five-match losing streak before winning the title in Doha, which includes victories over Roger Federer and Roberto Bautista Agut.  He was also the champion in Munich, and came through qualifying to reach the semis in Halle.

Basilashvili’s last loss before his successful run in Doha was at the hands of Norrie, who prevailed 6-0, 6-3 in Rotterdam.  Cam has dominated his last two matches this week in similar fashion, defeating Diego Schwartzman and Grigor Dimitrov while dropping only eight games across four sets.  The Brit has now won his last six semifinals, but his record in finals in striking different.  He’s only 1-4 this year in championship matches, and lost to Casper Ruud two weeks in San Diego 6-0, 6-2.  Meanwhile, Nikoloz has taken his last five finals, dating back to July of 2018.  With the biggest title of their careers on the line, Basilashvili is the favorite to utilize his powerful groundstrokes to secure victory. 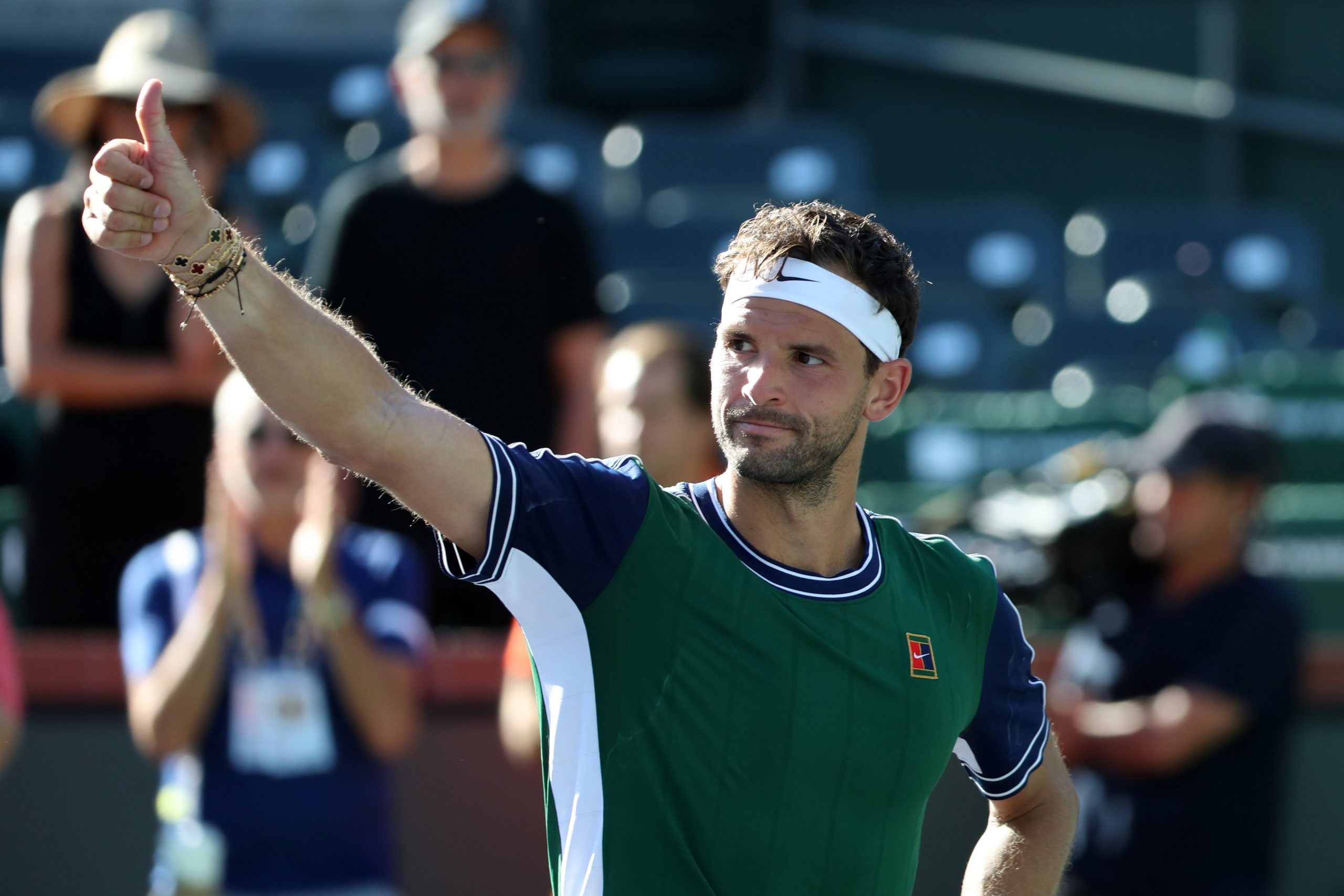 Grigor Dimitrov after his quarterfinal win on Thursday (twitter.com/BNPPARIBASOPEN)

Saturday’s men’s singles semifinals are quite surprising, featuring four players ranked outside the world’s top 25.  Cam Norrie and Grigor Dimitrov will square off in the first semi, in a rematch from earlier this season in Miami.  The second semifinal is also a rematch from March of this year, as Nikoloz Basilashvili and Taylor Fritz actually played in back-to-back weeks seven months ago, during the two weeks when this tournament normally takes place.

Also on Saturday, the men’s and women’s doubles championship matches will be contested.  The women’s final will start the day at 11:00am local time, while the men’s final will close out play after the singles semifinals are completed.

What a breakout season this has become for Cam Norrie.  The Brit is now 45-20 this year, and has been victorious in his last five semifinals.  Since his run to the final of San Diego two weeks ago, Cam has defeated four top 20 players: Shapovalov, Rublev, Bautista Agut, and Schwartzman.  Dimitrov also gained crucial momentum in San Diego, advancing to the semis and narrowly going down in defeat to eventual champion Casper Ruud.  Prior to that, 2021 had been a poor season for Grigor, as he was only 15-14.  Dimitrov’s last two wins this week were his most impressive in a long time.  He first came back from a set and two breaks down against top-seeded Medvedev, then survived a third-set tiebreak against Hubert Hurkacz.  When Norrie and Dimitrov met at the Miami Masters event in March, Cam prevailed 7-5, 7-5.  In the last round, Norrie simply walloped Diego Schwartzman 6-0, 6-2.  Based on his current level of play, I like Cam to win his sixth straight semifinal.

What a comeback Fritz staged on Friday.  Down 5-2 in the third and two match points against a red-hot Sascha Zverev, he fought back to eventually prevail in a tiebreak for what was the best and most exciting win of his career.  Taylor has now taken out three consecutive top 15 players: Zverev, Sinner, and Berrettini.  Basilashvili had compiled an up-and-down year, but when he’s on, he’s been tough to defeat.  He’s already claimed two titles this year, in Doha and Munich.  It was in Doha where Basilashvili overcame Fritz in the semifinals.  A week later, Fritz avenged that loss in Dubai, in a match decided by a third-set tiebreak.  Their only other meeting occurred four years ago in Chengdu, when Taylor won as a qualifier ranked 94th in the world.  Coming off the emotional high of his huge, thrilling victory on Friday, I expect it will be difficult for the American to recover and be at his best on Saturday.  That leaves Nikoloz with an enormous opportunity to reach the biggest final of his career, and he possesses strong groundstrokes which enable him to dictate the outcome.

Su-Wei Hsieh and Elise Mertens (2) vs. Veronika Kudermetova and Elena Rybakina – Hsieh and Mertens are looking for their second title as a team, after prevailing at Wimbledon in July.  Kudermetova and Rybakina just began teaming in August, when they reached the semifinals in Canada.

John Peers and Filip Polasek (7) vs. Aslan Karatsev and Andrey Rublev – Peers and Polasek were finalists two weeks ago in San Diego.  The Russians have won their last eight matches as a team, dating back to their title run in Qatar this past March.

Daniil Medvedev has withdrawn from Moscow as he looks to recover for the last two tournaments of the season. 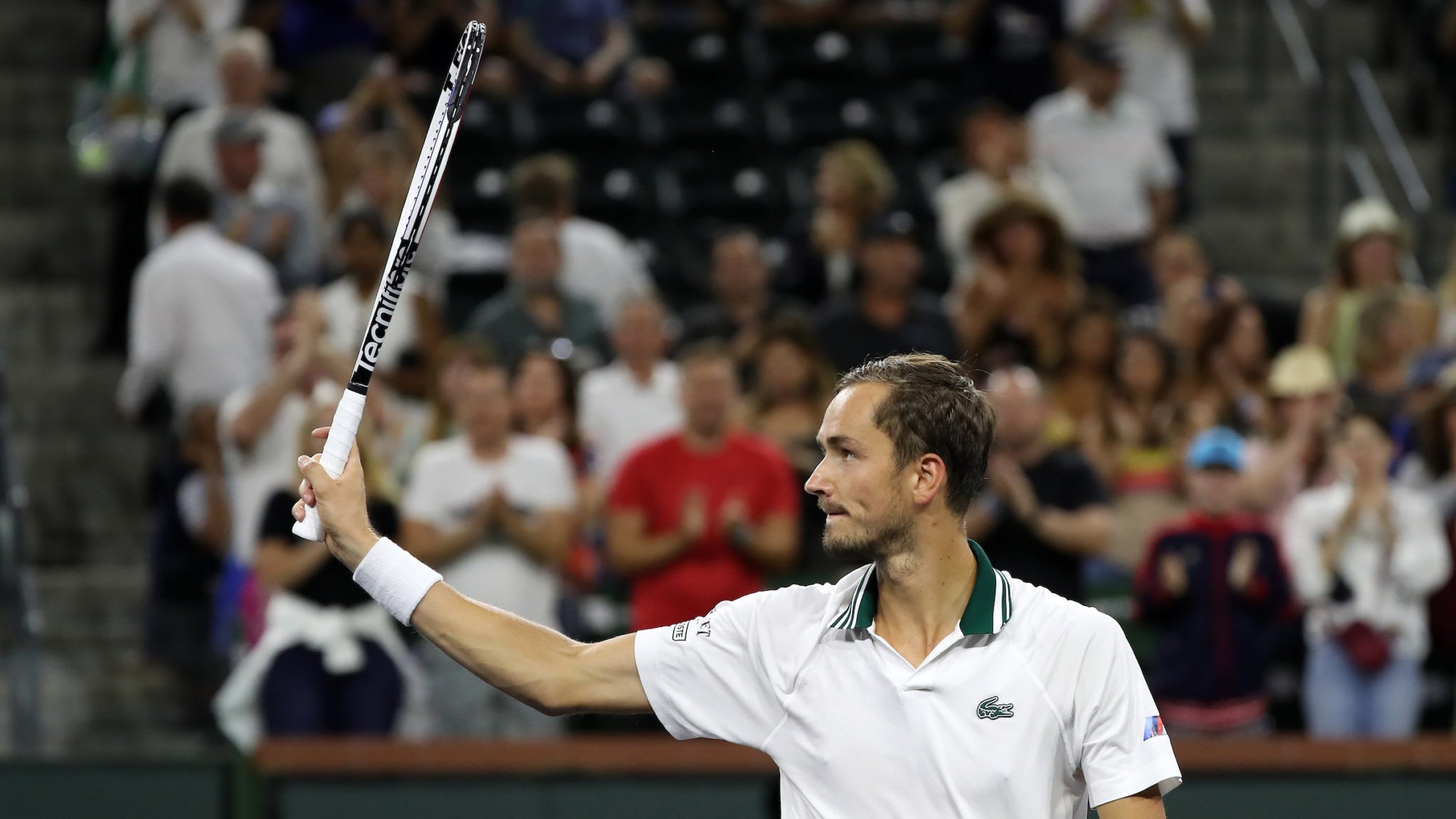 US Open champion Daniil Medvedev has withdrawn from his home tournament in Moscow as he looks to get fully fit for the rest of the season.

The world number two suffered a disappointing exit in the fourth round of Indian Wells when he lost to Grigor Dimitrov from a set and 4-1 up.

After that disappointment Medvedev has decided to take some time off and therefore withdraw from the Kremlin Cup next week in Moscow.

Citing not being at 100% the Russian will now look to be fit for the rest of the season which ends at the Nitto ATP Finals in Turin, “Hello everyone! I am really sad to announce that this year I won’t be participating in Kremlin cup,” Medvedev announced on his social media platforms.

“It’s always special to have a chance to play in front of Russian fans. I signed in to give myself best chances to play, but with calendar this year being extremely tough I felt that my body is not ready 100% anymore.

“This decision was very tough for me but it has to be done in order to be able to finish 2021 season strong! Thank you and see all soon!”

Medvedev will next play the last Masters 1000 event in Paris-Bercy before finishing his season in Turin as he looks to finish his historic season with a flourish.