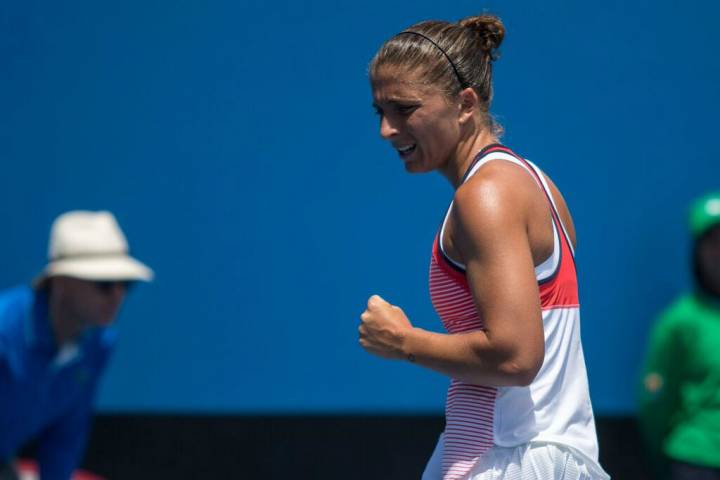 Sara Errani bounced back from a set down and a third-set deficit to overcome a marathon match against Madison Brengle 4-6 6-1 6-4 at the Dubai Duty Free Tennis Tournament.

Errani, who played the final in Dubai against Petra Kvitova in 2013, won a hard-fought match after earning 39 break points but managed to scrape through to secure her spot in the semifinal where she will face the winner of match between Coco Vandeweghe and Elina Svitolina.

Errani converted on 10 of her 22 break point chances, while Brengle broke seven times.

In the first set Errani won four consecutive games from 0-1 down to take a 4-1 lead thanks to a double break. Brengle rallied from 0-30 down to get both breaks back clawing her way back into the match. The US player broke again when Errani was serving to stay in the set and won her fifth consecutive game to close out the first set 6-4.

Brengle recovered from 0-40 by winning three consecutive points to break serve at deuce after a very long first game. Errani broke straight back to draw level to 1-1. Brengle broke serve twice more in the third game and in the fifth game to build up a 4-1 lead. Errani bounced back by winning four consecutive games to win a dramatic match by 6-4 in two hours and 22 minutes.

“ It was very windy. She did not miss a ball. It’s not easy to play against her. At the beginning there was a lot of wind. Just to be in the semifinal for me is an amazing result. I will try to play to do my best in my next match. It was difficult for me to play the ball. I could have lost easily. I just kept fighting. ”, said Errani.

Garcia didn’t face a break point in the first set. The French player broke serve in a very long third game to take a 2-1 lead and in the ninth game to close out the opening set in 37 minutes. She did not face any break points on her serve during the first set.

Garcia broke serve on the third break point to take a 2-0 lead. Petkovic broke straight back in the third game. They went on serve until the 10th game when Perkovic was serving to stay in the match at 4-5. Garcia clinched another break in the final game to close out the match by 6-4 after one hour and 31 minutes when Petkovic hit a backhand wide. Garcia hit 23 winners to Petkovic’s 6.

Garcia took a re-match against Petkovic who had beaten the French player twice last year in Eastbourne and at the US Open in 2015.

Garcia will play against either Ana Ivanovic or Barbora Strykova in the semifinals.

“You always have to fight very hard against Andrea. She is a big fighter always trying to come back in the match. The conditions were very difficult. It was very windy, sometimes more than yesterday. I always have to be ready for the ball. Sometimes it was not very good tennis. It was not very rhythmic but you have to stay focused and just keep your tactics on”, said Garcia.

The Dubai Tournament has become the first in WTA Tour history to see all eight seeds lose in the first round. It’s the fourth time in WTA history that no seeds reached the quarter finals. This has added to the unpredictability of this tournament which is held in tricky weather conditions. The top four seeds Simona Halep, Garbine Muguruza, Carla Suarez Navarro and Petra Kvitova were all knocked out on a rain-disrupted Wednesday after getting a first-round bye. The other four seeds Belinda Bencic, Karolina Pliskova, Roberta Vinci and Svetlana Kuznetsova lost in the first round.