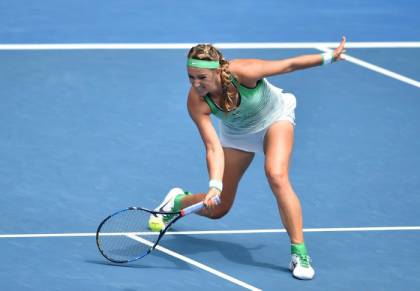 Number 14 seed Victoria Azarenka swept aside 18-year-old qualifier Naomi Osaka 6-1 6-1 to get through to the fourth round at the Australian Open in Melbourne.

Azarenka dropped just five games in three rounds during the first week of the Australian Open confirming that she is one of the greatest favourites to win the title after two seasons ruined by injury problems. Osaka broke serve in the first game of the match but Azarenka broke straight back and reeled off the next eight games to take the first set 6-1 in just 27 minutes and take a 2-0 lead in the second set. Osaka held her serve for 1-2 and earned a break point in the next game but Azarenka was unstoppable and raced out to 6-1 to close out the second set in 56 minutes. Azarenka hit 23 winners to Osaka’s 4.

“If you think about it, it’s my 12th time at the Australian Open. Almost half of my life. It’s a long time. Every day I am living my dream, to live tennis. I was a young kid who wanted to play tennis, visualized being on the big stages and now I am here today. I never want to take it for granted. I don’t want to think of what happened yesterday or what’s going to happen tomorrow. I really want to stay present and enjoy what I do. So I am really just enjoying whatever is happening. For me, what I found interesting is that it was going the wrong way. I had injuries. I had not much of luck happening. I wanted to look and assess what I can do better, what I can improve. First it was getting healthy and then trying to just enjoy. It comes pretty natural, but it required a lot of self-work and really start kind of accepting myself for failures that I had. I really just accepted those and moved forward, trying to see  what I can do better”, said Azarenka.

Azarenka will take on Barbora Strykova who upset Garbine Muguruza in the fourth round on Monday. Azarenka leads 4-0 in her previous head-to-head matches against Strykova.

Ekaterina Makarova beat Karolina Pliskova 6-3 6-2 to reach the fourth round in Melbourne for the sixth consecutive year. Pliskova has never reached the second week in any Grand Slam tournaments so far in her career. Makarova, who reached the Australian Open semifinals last year, hit 35 winners to 15 unforced errors.

Makarova will face Great Britain’s Johanna Konta who beat Czech Denisa Allertova 6-2 6-2. It will be the second head-to-head match between Makarova and Konta.

The British player scored her first win over a top-10 player when she beat Makarova 6-2 6-4 at Eastbourne last June. Konta has reached her second consecutive Grand Slam fourth round after qualifying for the last 16 last September at the US Open.

Konta won 72 percent of her first serve points and never faced a break point. She converted her first break point chance and fired an ace to seal the first set. Konta, who dropped their only previous head-to-head match at last year’s Roland Garros, broke for the third time in the match at the start of the second set and never looked back to close out a one-sided match in 63 minutes.

Last September Konta lost to Petra Kvitova in two tight sets in the fourth round at the US Open.