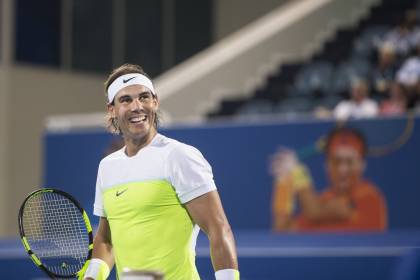 Rafael Nadal got 2016 off to a winning start beating big server Milos Raonic 7-6 (7-2) 6-3 to clinch his third win at the Mubadala World Tennis Championships at the Zayed Sports City in Abu Dhabi.

Nadal earned the first break points in the fifth game but Raonic saved them with a smash and a service winner. Raonic wasted a 40-0 lead in the 7th game as Nadal forced it to deuce but the Canadian held his serve.

In the second set Raonic saved three break points in a very tough fourth game which lasted 10 minutes. The Spanish star got an another chance when Raonic hit an easy smash into the net. Nadal converted his chance this time to take a 3-1 lead. Both players served well in the following games and there were no more break chances for both players.

Nadal has lifted his first title at the Mubadala World Tennis Championships since winning twice in a row in 2010 and 2011. After losing the final against Andy Murray in the inaugural edition in 2009, Nadal beat Robin Soderling in 2010 and Roger Federer in 2011.

Nadal will play next week in Doha where he won the title in 2014. Last year Nadal was beaten by Michale Berrer in the first round. He will make his debut agianst his compatriot Pablo Carreno Busta in teh first round.

Raonic will play his first ATP tournament in Brisbane next week. The Canadian, who announced a coaching collaboration with Carlos Moya yesterday, finished runner-up to Roger Federer last year in the Australian ATP 250 tournament.

Ferrer broke in the fifth game en route to winning the second set 6-4 forcing the mach to the super-tie-break. Wawrinka got two mini-breaks to race to 5-0 but Ferrer rallied by reeling off ten of the last thirteen points to take the super tie-break with 10-8.

Ferrer will now travel to Doha where he bids to defend his title from last year. Ferrer also reached the semifinal in the Qatar Open ATP 250 in 2012. In the Qatari city the Spanish player will face a star-studded field which features three more top ten players including Novak Djokovic, Rafa Nadal and Tomas Berdych.

Wawrinka will defend his last year’s title in Chennai. He will lead the field which features Kevin Anderson from South Africa, Benoit Paire from France, who reached the semifinal in 2012 and the quarter final in 2013 in the Indian tournament, Roberto Bautista Agut, semifinalist last year, Borna Coric and Vasek Pospisil.

Top seed falls in qualifying first round in Doha