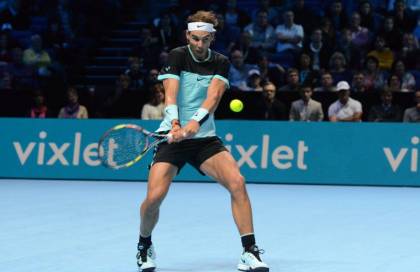 Rafael Nadal beat his compatriot David Ferrer 6-3 6-7 (4-7) 6-3 in the semifinal of the Mubadala World Tennis Championships at the Zayed Sports City International Tennis Centre showing that he is coming back to his best form.

Nadal, who is making his seventh appearance in Abu Dhabi, was in control in the first set and needed 34 minutes to seal the first set. The World Number 5 got an early break in the fourth game and closed out the first set with an ace after 34 minutes.

Nadal broke serve in the third game of the second set but Ferrer clawed his way back into the match to draw level to 4-all with three consecutive breaks of serve. Ferrer edged Nadal 7-4 in the tie-break after a 68-minute second set to force the match to the third set.

Nadal bounced back in the third set by breaking serve in the second game before closing out with a forehand on his first match point.

Nadal will return to the Mubadala World Tennis Championships for the first time since 2011 when he won his second title in Abu Dhabi.

Nadal will face either Milos Raonic or Stan Wawrinka in tomorrow’s final.

Feliciano Lopez took on Kevin Annderson in the final for the 5th and the 6th place play-off as a late replacement for injured Jo Wilfried Tsonga on the second day of the Mubadala World Tennis Championships. Lopez edged Anderson after two tie-breaks with 7-6 (7-5) 7-6 (7-3) to take fifth place.

Lopez came back from 1-4 in the tie-break to win the first set with 7-5 after 50 minutes. The second set also came down to the tie-break where Lopez cruised to 6-0 before winning it with 7-3. Anderson lost to Milos Raonic 6-3 6-4 on the first day of the Mubadal Exhibition Tournament. Lopez replaced Tsonga who was forced to withdraw with a right forearm injury. The Frenchman played with a heavily bandaged arm against Ferrer in yesterday’s match.

“I practiced a lot during the off-season and it just felt a little bit tight. What I did was just a precaution”, said Tsonga.

Related Topics:David Ferrerrafa nadal
Up Next