TENNIS BITS & PIECES – Victoria Duval has been diagnosed with Hodgkin’s lymphoma. Li Na splits with her coach. The Bryan brothers are stuck at 98. Miami Open changes sponsor. Nole is now qualified for the ATP Finals and who is playing where this week. Joshua Bosco

Victoria Duval, 18 year old American who makes her debut in the Top 100 today after reaching the second round of Wimbledon as a qualifier, released a statement through her management company on Friday saying she had been diagnosed with Hodgkin’s lymphoma.

The player revealed she received the news after her first round of qualifying at the grass-court Slam but decided against withdrawing. She went on to qualify for the first time at Wimbledon and also win a first round match against Sorana Cirstea, before losing to Swiss rising star Belinda Bencic in straight sets.

Fortunately it looks like the cancer was caught in its early stages and the prognosis is for a full recovery within a couple of months, according to IMG. The American youngster is the third player to have been diagnosed with the disease in the last four years, after Alisa Kleybanova in 2011 and Ross Hutchins in 2013. Both players then made a successful return to the courts, so we hope for a safe and speedy recovery for Duval.

On Thursday it was announced that World No. 2 Li Na and coach Carlos Rodriguez had parted ways after nearly two years of collaboration.

The official reason behind the split is that Rodriguez is no longer able to travel around the world with the player as he needs to spend more time at his Beijing-based tennis academy.

Li Na will now try and regain her form and confidence in time for the US Open, which starts on August 25th, after two shocking defeats at Roland Garros (1st round) and Wimbledon (3rd round).

The Bryan brothers were denied a 16th Grand Slam title and 99th overall title together on Saturday when they were defeated by unseeded Vasek Pospisil and Jack Sock, who were playing together for the first time in their career.

The American doubles legends, who are now 3-4 in Wimbledon finals, will have to win at the US Open in order to keep alive their nine year streak of winning at least one Grand Slam tournament per season.

According to reports, electronics giant Sony has decided against the renewal of its agreement as main sponsors for the Miami Masters. Even though the tech firm is considering staying connected with the Masters and Mandatory Premier event in other ways, the tournament will go by the name Miami Open until it finds a new title sponsor.

It also looks like clothing line Fila opted out of its sponsorship because the tournament is asking $900,000, three times more than their previous agreement.

After reaching the final at Wimbledon, Novak Djokovic has become the second player to qualify for the World Tour Finals which will take place at the O2 Arena in London in November. Djokovic joins Nadal who qualified after winning his ninth Roland Garros title last month.

After reaching his ninth final at Wimbledon Roger Federer is 1230 points shy of automatic qualification, while Stan Wawrinka is safely in fourth position and Berdych in fifth. It remains to be seen who will take the last three spots with less than 600 points separating sixth placed Grigor Dimitrov and eleventh placed Milos Raonic with Murray, Nishikori, Ferrer and Gulbis sitting in the middle.

While many top players are resting after Wimbledon, some of them are eager to get back on court and will divide themselves between ATP tournaments in Bastad, Newport and Stuttgart.

Carlos Berlocq will travel to Bastad to try and defend his 2013 title at the Swedish Open, but will face tough competition from the likes of David Ferrer, Tommy Robredo, Fernando Verdasco, Jerzy Janowicz and Jeremy Chardy.

Defending champion Nicolas Mahut will play at the 2014 Hall of Fame Tennis Championship in Newport and the Frenchman will be joined by John Isner, Ivo Karlovic, Lleyton Hewitt, Donald Young and Wimbledon doubles champion Jack Sock. Marcos Baghdatis and Sam Querrey have withdrawn before the start of the tournament.

Fabio Fognini will be both defending champion and top seed at the 2014 MercedesCup in Stuttgart, where he will play alongside Mikhail Youzhny, Roberto Bautista Agut, Feliciano Lopez, Philipp Kohlschreiber and Santiago Giraldo. Marcel Granollers and Denis Istomin have withdrawn before the start.

The majority of top women will also take a break before the difficult American swing, but some of them are willing to play a couple of clay-court tournaments in Europe before flying over to the US.

Today sees the start of the first edition of the BRD Bucharest Open, an International tournament which replaces the Hungarian Grand Prix in Budapest. Local girl Simona Halep is the top seed but she’ll have to battle past some difficult players like Roberta Vinci, Klara Koukalova, Karin Knapp, Annika Beck and Anna Schmiedlova to become the first champion of this Romanian tournament. Vania King and Barbora Zahlavova-Strycova are among the players who withdrew before the start. 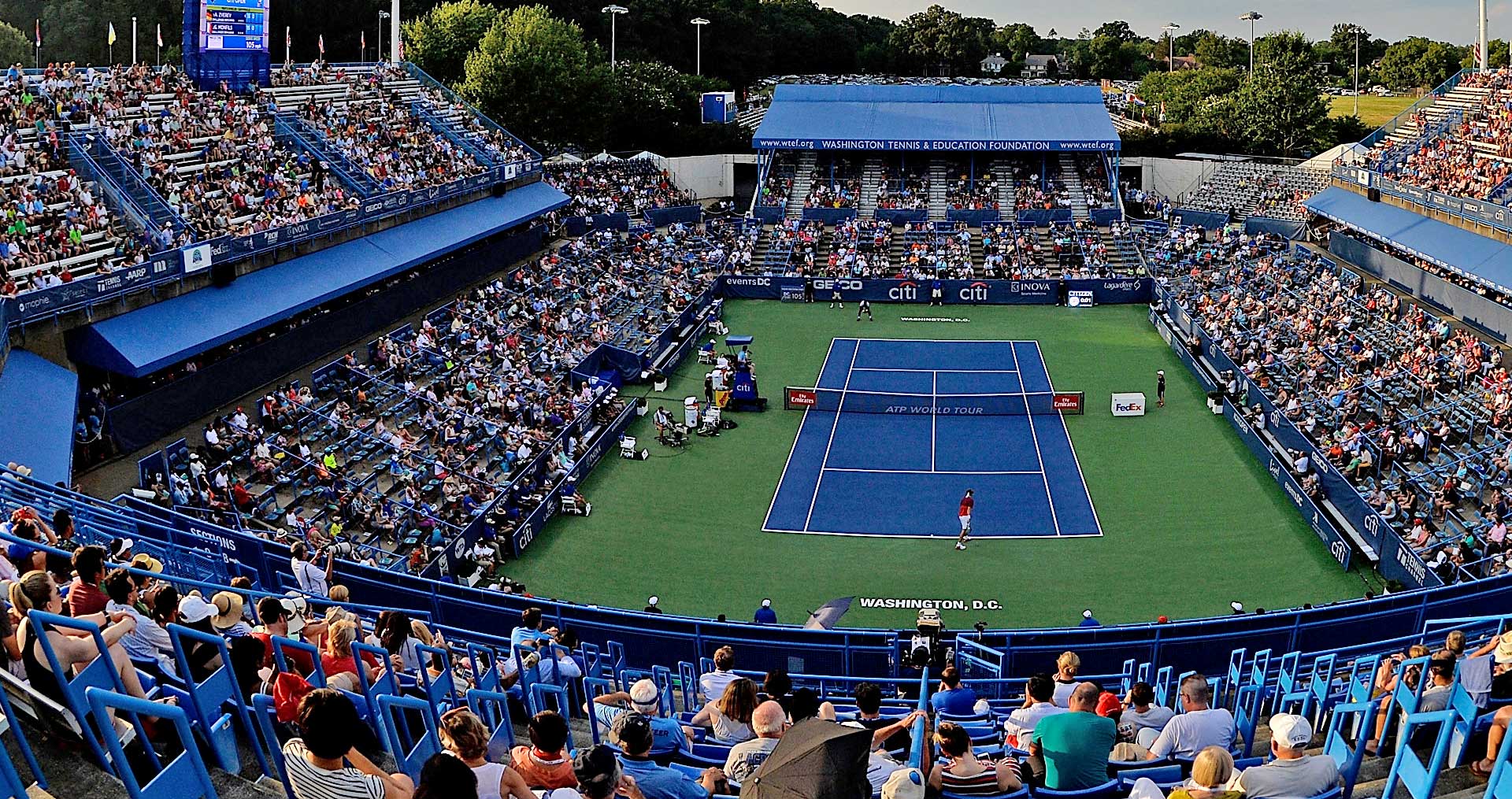 The US Open Series is ready to get to the heart, with the historic tournament of Washington D.C.

The Citi Open in Washington, the only ATP tournament to be contested next week, will follow Atlanta in the American summer tour. The event has been taking place on hard-courts since 1969, when Thomaz Koch from Brazil won the first edition defeating Arthur Ashe in the final.

Rafael Nadal, who has received a Wild-Card, Felix Auger-Aliassime and Alex De Minaur will be the first three seeded players. Jannik Sinner, Aslan Karatsev, Karen Khachanov and the defending champion Nick Kyrgios are committed to play as well, while Milos Raonic and John Isner have withdrawn. Denis Kudla, Brandon Nakashima and Feliciano Lopez will play with a Wild-Card.