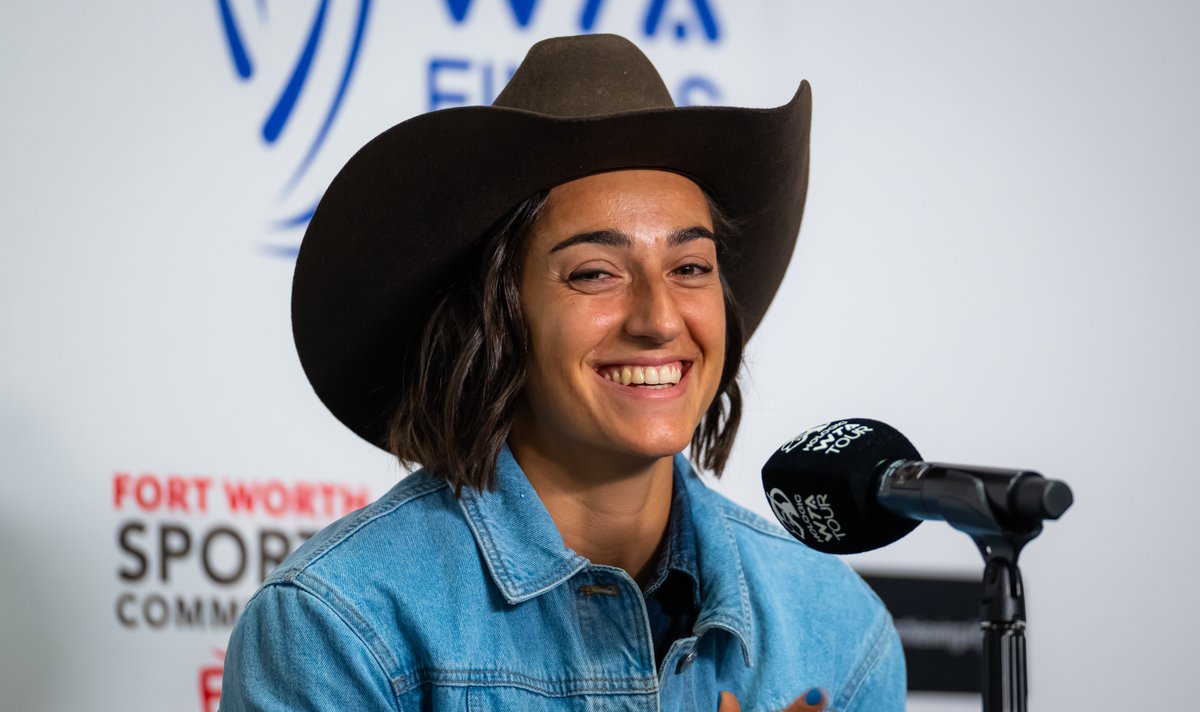 Caroline Garcia on media day in Fort Worth (twitter.com/wta)

The WTA’s biggest non-Major final of the year is on Monday night in Texas.

Caroline Garcia started 2022 ranked 74th in the world, and had a modest first five months of the year.  But her season changed dramatically this summer, as she won three titles across three different surfaces, and achieved her first Major semifinal in New York.  In her second appearance at the WTA Finals, she has reached the biggest final of her career.

Aryna Sabalenka started 2022 ranked No.2 in the world, and despite some horrendous double fault woes, has managed to maintain a top 10 ranking throughout the season.  Across the last six Majors, she has reached three semifinals, yet lost all of those semifinals 6-4 in the third.  In Sunday’s semifinals at this event, she erased much of that scar tissue by defeating World No.1 Iga Swiatek.  In her second appearance at the WTA Finals, she has reached the biggest final of her career.

Monday’s play in Fort Worth begins at 5:30pm local time with the doubles championship match.  It will be Barbora Krejcikova and Katerina Siniakova (1) vs. Veronika Kudermetova and Elise Mertens (4).  Krejcikova and Siniakova have not dropped a set this past week, and are looking to defend their title from a year ago after claiming three titles this season, all of which were Majors.  Kudermetova and Mertens are also undefeated to this stage, and this is their fifth final of 2022.  In last year’s final, the Czech team defeated Mertens and her then-partner, Hsieh Su-Wei.

The winner of this championship match will become the new World No.4.  They have split four previous meetings, all on hard courts.  Three of them took place in 2018, with Sabalenka taking two of three.  But earlier this season in Cincinnati, Garcia prevailed in three sets, on the way to her biggest title to date.

Garcia went 3-1 this past week, with her only loss coming at the hands of Swiatek.  In a must-win match to advance out of round-robin play, she outlasted Daria Kasatkina in a grueling match decided by a third-set tiebreak.  She then bounced back just a day later in the semifinals to easily dispatch of Maria Sakkari, who had been undefeated to that stage.

Sabalenka also went 3-1 this past week, with her only loss coming against Sakkari.  Her most notable round-robin win occurred on the first day of thetournament, when she survived a high-quality affair with Ons Jabeur 7-5 in the third.  In her aforementioned semifinal against Swiatek, she became only the ninth person to defeat Iga this season, and only the fifth to take a third set from her.

Sabalenka had the much tougher semifinal on Sunday, and it was an emotionally draining one for sure.  How will she recover for Monday night’s final?  Garcia’s return position well inside the court will apply plenty of pressure to Aryna’s serve, which as noted can go off the rails at any moment, especially during big moments.  And having taken their only match this year, I like Caroline’s chances of winning the 2022 WTA Finals.