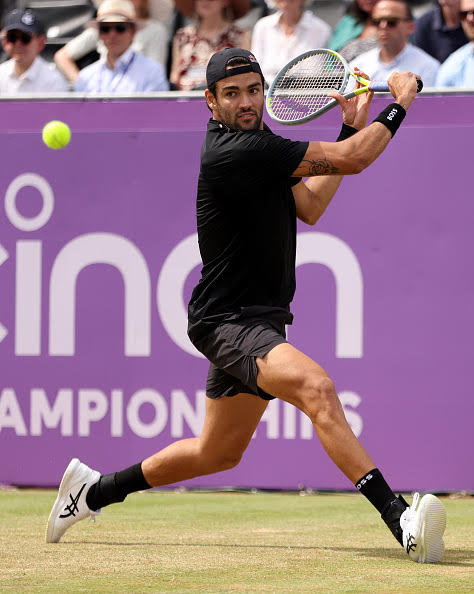 Italy’s Matteo Berrettini admitted that he was fortunate enough to scrape through after overcoming American Denis Kudla in three sets at Queen’s.

At one point it looked like Kudla had Berrettini on the ropes being a set up and holding two break points but last year’s Wimbledon finalist held firm to win 3-6, 7-6 (7-5), 6-4.

After the match I spoke to Matteo and said to him, ‘the best players always find a way to win and you showed that today. How were you able to influence the match in those key moments?’

And this is what the world number 10 had to say.

“I’m glad that I’m through to the quarter-finals. I knew that I wasn’t playing my best tennis,” Berrettini said.

“It was a really tough match. I think the key to the match was I accepted what was happening.

“I accepted that even though I love playing on grass, I wasn’t playing well. I wasn’t feeling good and the energy level wasn’t good,” he said.

“But I worked with what I had during the match. I asked myself to be the player who is able to win, and work with what I have in that moment. And I think that is really important for our sport.

“It allows you to be consistent, even though you don’t feel that good, if you have a physical problem or you feel tired.

“This morning I woke up and I felt a little tired, but I guess that’s normal.

“I’ve been playing and travelling a lot, and it’s not easy to come back after three months out and go straight into six or seven matches in a row. But I accepted it and I’m glad that I did.

The defending champion also admitted that screaming at himself helped to gee him up during the difficult moments of the match.

“Sometimes in order to flip the match around or the energy level and your mindset, you have to scream.

You have to do something that gets into your body, into your mental mindset in that moment,” he said.

“I don’t feel comfortable throwing rackets or throwing balls, it’s not something I like to do. But sometimes screaming at yourself helps.

“I remember at one of the change-overs, I look at the glass half full.

“I said to myself; ‘ok you’re here, a lot of people are watching you. Two months ago, you were home doing your rehab, your pinkie wasn’t even moving, so don’t complain.

“Fight. Enjoy it. This is what you live for and worked for all your life.’

Berrettini will face American Tommy Paul today for a place in the semi-finals.