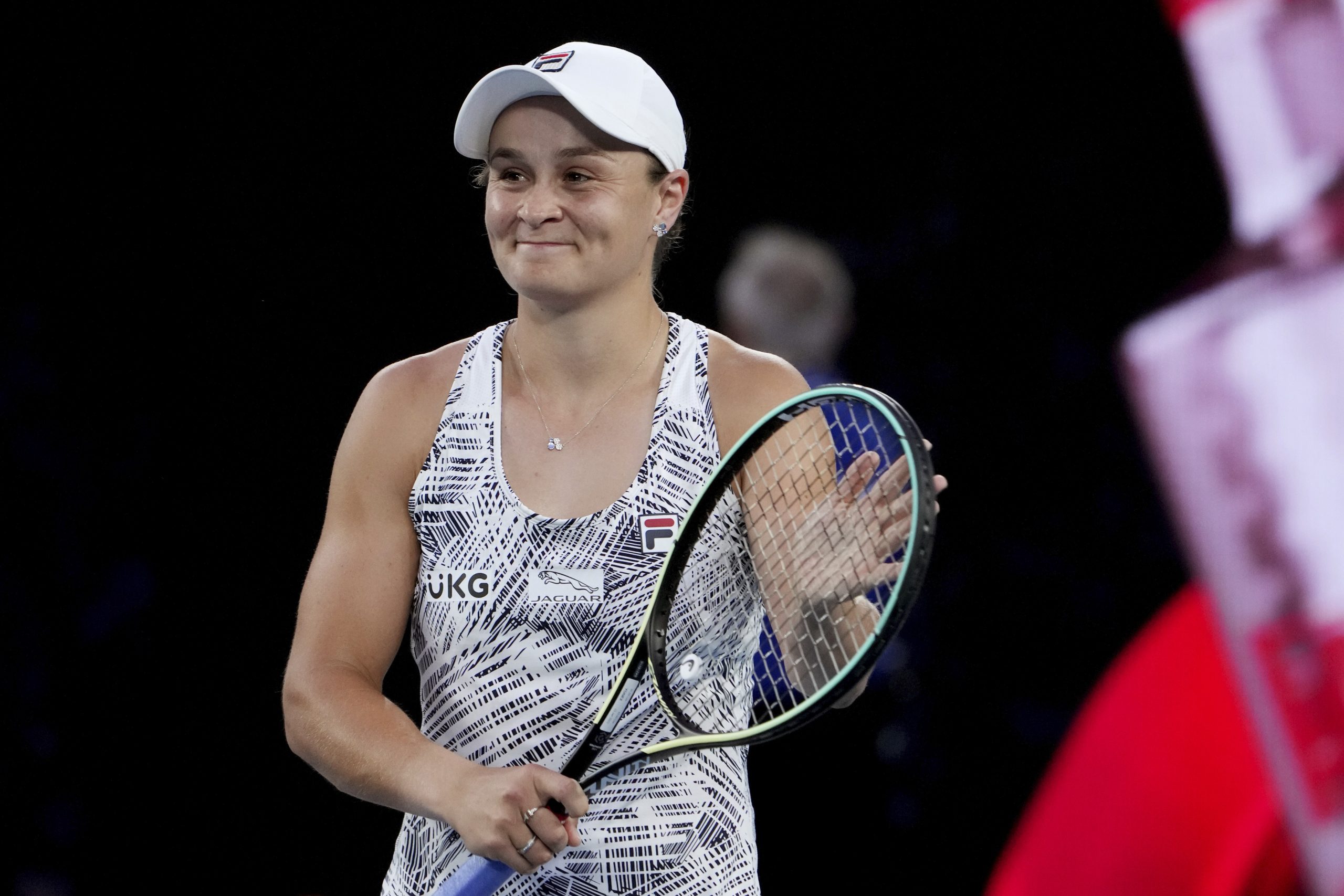 Ash Barty has reached the quarterfinals or better in four consecutive years at the Australian Open (twitter.com/AustralianOpen)

Thursday in Melbourne, World No.1 and Australia’s own Ash Barty looks to advance to her first Australian Open singles final.  But a red-hot, big-hitting Madison Keys stands in her way.  The second women’s semifinal also includes an American, as Danielle Collins faces Iga Swiatek just over 24 hours after both players survived their quarterfinals in the Aussie heat.

And Dylan Alcott, recently named Australian of the Year, will play in the quad wheelchair singles final, which will be the last match of his career.  It will be a huge day for Australian tennis across multiple disciplines.

This is the second Australian Open semifinal for both women.  Barty first appeared at this stage two years ago, while Keys did so in 2015.  Both lost those previous semifinals to the eventual champions (Barty to Sofia Kenin, Keys to Serena Williams).  Ash has been unstoppable through five rounds.  She is yet to drop a set, and allowed her opposition only 17 games across 10 sets.  Keys survived a third-set tiebreak in the third round, but otherwise she has also advanced comfortably.  Barty leads their head-to-head 2-1, though they’ve only previously met on clay or in the Billie Jean King Cup.  Based on Barty’s current form, it’s impossible not to consider her the favorite.  However, Keys’ powerful serve and groundstrokes will apply plenty of pressure, as will the expectations that come with playing at her home Slam.  And two years ago in the semifinals, Ash wilted on a hot day against another American, Sofia Kenin.  But this is the first year where the women’s semifinals are occurring in the evening rather than the day, which will make for cooler conditions.  Also, this could become an indoor match based on rain in the forecast.  And most importantly, it seems Barty is more prepared to meet this moment than she was two years ago.  Her all-around skills, which have separated her from the rest of the tour, make Ash the favorite to reach her third Major singles final.

This is the second Major semifinal for both women.  Swiatek of course was the 2020 Roland Garros champion, while Collins also reached the semifinals here three years ago.  And unlike Barty and Keys, these players did not have a day of rest after their quarterfinals, which were both played midday during the hottest day of the fortnight thus far.  Notably, Collins played her match earlier, giving her more time to recover.  And she spent less than half as much time on court as Swiatek.  Danielle defeated Alize Cornet in straight sets, while Iga needed three sets, and over three hours, to overcome Kaia Kanepi in a physically and emotionally draining quarterfinal.  In their only previous encounter, which occurred last February in Adelaide, Swiatek was ahead 6-2, 3-0 before Collins retired.  Not too long after, Danielle underwent emergency endometriosis surgery, so it’s quite remarkable how Collins has quickly recovered and played the best tennis of her career.  Thanks to back-to-back titles last summer and this semifinal run, she’s poised to become the No.1-ranked American.  Normally Swiatek should be favored, but coming off what Iga endured just 24 hours earlier, and considering the fight Collins has displayed both on and off the court, an upset on this day would not be surprising.

Marcel Granollers and Horacio Zeballos (3) vs. Thanasi Kokkinakis and Nick Kyrgios (WC) – The Australians have thrilled crowds in defeating two seeded teams to this stage, including the No.1 seeds.  Granollers and Zeballos are yet to drop a set, and won two titles last year.

Rajeev Ram and Joe Salisbury (2) vs. Matthew Ebden and Max Purcell – Ram and Salisbury are seeking their third consecutive Australian Open final.  At the US Open in September, they beat Ebden and Purcell in a third-set tiebreak by a score of 12-10.

Dylan Alcott (1) vs. Sam Schroeder (2) – In his last match before retirement, Alcott is playing for his sixth consecutive Major title.  Schroeder is the last man to defeat Alcott at a Major, at the 2020 US Open.

Related Topics:australian open
Up Next

Players playing Wimbledon have no ranking points to play for. 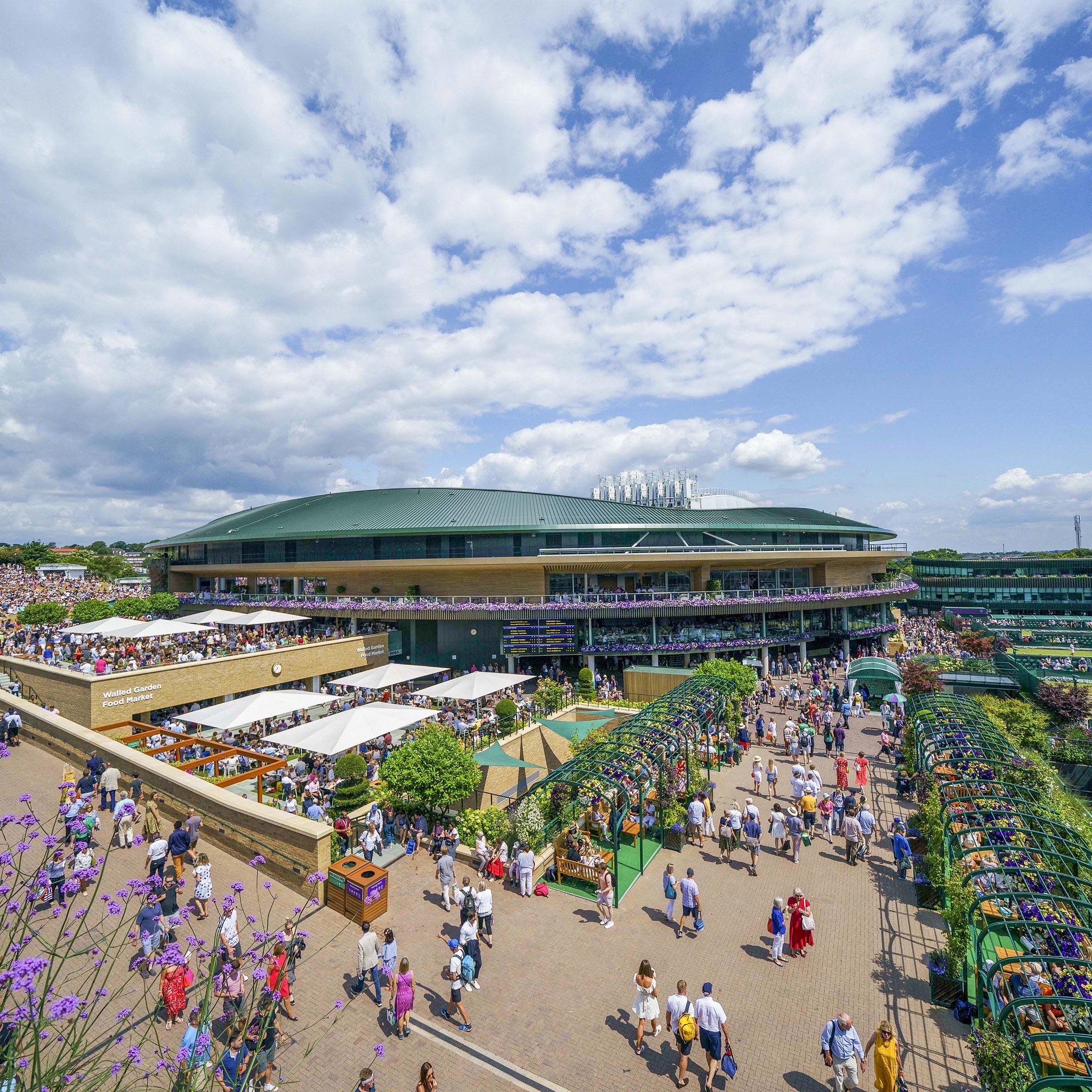 The ATP responded in regards to the ban on Russian and Belorussian players that was made by the tournament.

The ATP has officially responded to Wimbledon banning all Russian and Belorussian in response to the Russian invasion of Ukraine which has wreaked havoc on the world of sports.

Russian and Belorussian players up to this point have been playing under their name and not their country.

The ATP released a statement in regards to the decision that was made.

The move essentially makes Wimbledon an exhibition event meaning players who decide to play won’t be able to move up in the world rankings and points won’t have to be defended.

Wimbledon made the announcement in April that they would placing the ban as the All England Club stated the possibility of the Russian government using players success as propaganda for the reason behind the move.

The ATP responded by saying the ban violated their agreement and discriminating against players since they compete as individuals. Removing points seemed like the only feasable move to make.

Russian and Belorussian players are allowed to play at the French Open which begins this Sunday in Paris. Danil Medvedev who is currently the 2nd ranked player in the world was asked about the move.

He also added that if he couldn’t play there this year he would try to play next year and play good.

The WTA has also followed suit but this time has also penalized some of the warm-up tournaments.

Wimbledon is currently scheduled to start on June 27th and will culminate with the final on Sunday July 10th. 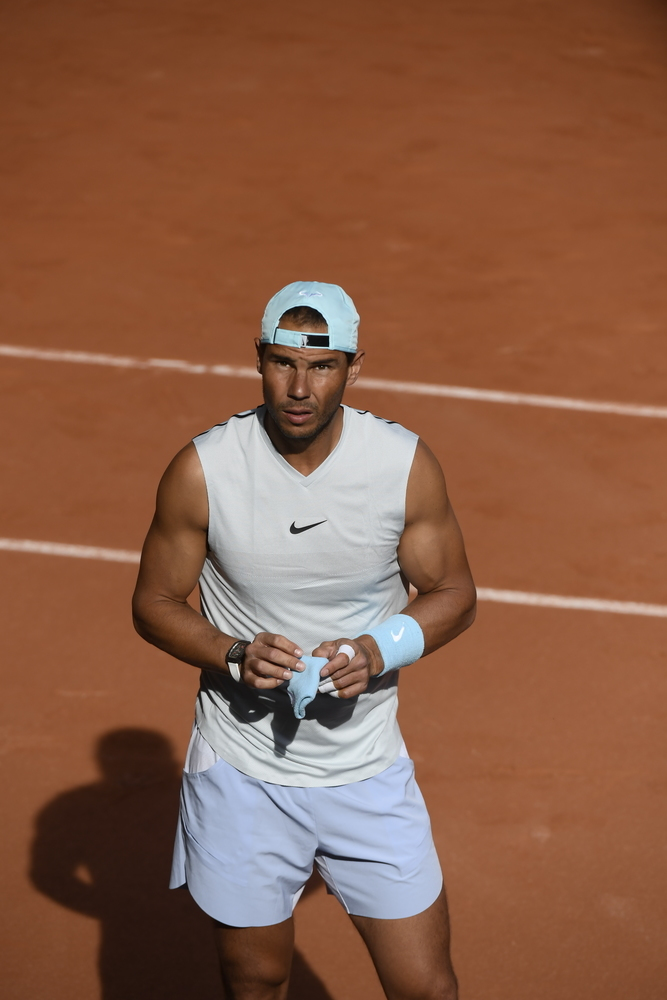 Rafael Nadal has dismissed that he is the favourite for Roland Garros after admitting that his foot pain is still present.

Nadal searches for his 14th Roland Garros title over the next two weeks but enters with doubts.

This is after the Spaniard went out at the quarter-final stage in Madrid to eventual champion Carlos Alcaraz.

That was followed by a third round exit in Rome where he, literally, limped out to Denis Shapovalov.

Now Nadal approaches the tournament in a situation where it is unknown whether he can claim a 22nd grand slam title in the French capital.

Speaking in his pre-tournament press conference Nadal dismissed his chances and claimed his foot pain is still present, “I mean, for sure not, because the results says that I am not, but is something that never worried much to me, no?,” Nadal said when asked if he was the favourite to win the title.

“It’s not about gonna disappear now. It’s about if the pain is high and strong enough to allow me to play with real chances or not. But in my case, is something that I live every day with that, so is nothing new for me and is not a big surprise.

“So I am here just to play tennis and to try to make the best result possible here in Roland Garros, no? And if I don’t believe that this thing can happen, probably I will not be here.

“So I am just working as much as I can, and practicing as good as possible. My real goal is just put me in a position that I am healthy and playing enough good tennis to give myself good chances.”

Time will tell whether Nadal has healed in time to be a contender for Roland Garros and claim his second grand slam of the season.

One thing we do know though is that the Spaniard has a tricky draw with Novak Djokovic looming in the last eight and Carlos Alcaraz awaiting in the semi-finals.

Despite the tough draw Nadal admitted he doesn’t really think about the draw until he faces the players he has to play, “I mean, mentally for me it doesn’t matter,” Nadal said.

“In terms of tennis, of course the top of the draw you see the names, of course is a very tough one. But we are in a Grand Slam, and you never know what can happen, no? You know, remain a lot of things to happen, to probably arrive to the matches that you are thinking, you know.

“I mean, the only thing that I can say is of course I know everything. For me never have been a problem that. I am probably humble enough in that case to just be focused on my first match. Doesn’t matter if I know where I am exactly and what, you know, possible opponents I can have.

“Only thing that I would like is be the player that, one of the players that you think can face these other great players.”

Before Nadal can think about Djokovic or Alcaraz, the 21-time grand slam champion will have to overcome his first obstacle in Jordan Thompson on Monday. 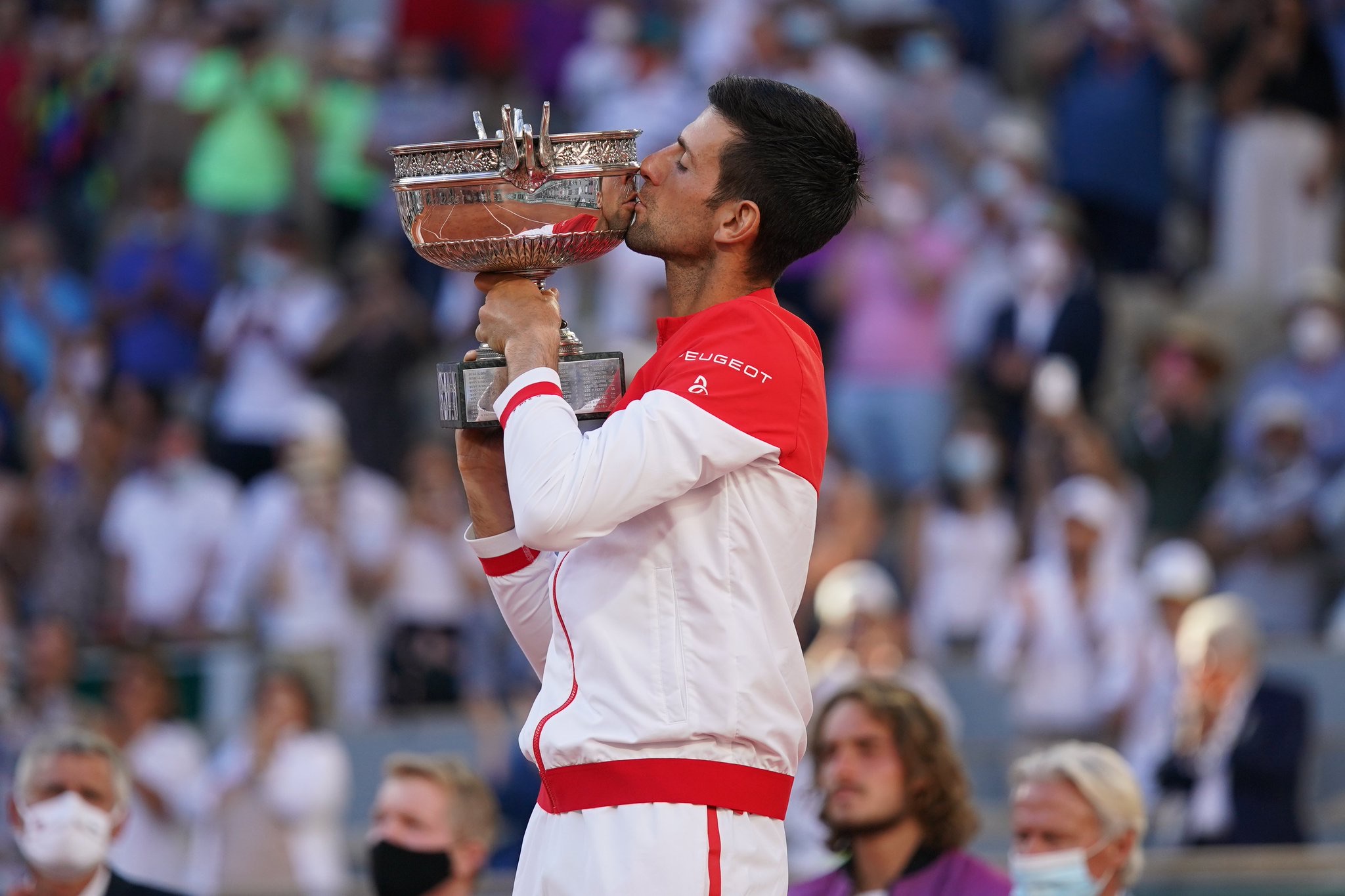 World number one Novak Djokovic has been drawn against Rafael Nadal and Carlos Alcaraz in the top half of the men’s draw at Roland Garros.

Djokovic is looking to claim a record-equalling 21st grand slam title at Roland Garros as well as successfully defend his title.

However to do that the Serb will have to go through both Rafael Nadal and Carlos Alcaraz en route to the final.

In his opening match Djokovic will face Yoshihito Nishioka before possibly facing Alex Molcan who is coached by Djokovic’s former coach Marian Vajda.

The winner of that match could face Carlos Alcaraz in the semi-finals with the Spaniard projected to meet Alexander Zverev in the last eight.

Meanwhile Nadal will open his campaign against Jordan Thompson before potentially facing Stan Wawrinka in a rematch of the 2017 final.

Meanwhile in the second quarter of the draw Alcaraz and Zverev both face qualifiers in the opening round.

Alcaraz could face Sebastian Korda, who he lost to in Monte-Carlo, and Cameron Norrie en route to the last eight.

While Zverev would face Alejandro Davidovich Fokina and Taylor Fritz before a showdown with Alcaraz.

In the bottom half of the draw Casper Ruud and Stefanos Tsitsipas could meet in the last eight.

Tsitsipas, who was two sets to love up in last year’s final, will face Lorenzo Musetti in the opening round.

There could be a last 16 meeting for Tsitsipas with Denis Shapovalov however the Canadian will face in-form rising star Holger Rune in the opening round.

Ruud’s opening match will be against Jo-Wilfred Tsonga, who is playing his final Roland Garros of his career.

In the bottom quarter, Andrey Rublev will meet Soonwoo Kwon in his opening match with the Russian potentially facing Jannik Sinner in the last 16.

While Daniil Medvedev takes on Facundo Bagnis in his opening match in what will be his second tournament back since surgery.

Medvedev could be scheduled to meet Miami Open semi-finalist Miomir Kecmanovic in the third round.

Here is the draw with play beginning on Monday: