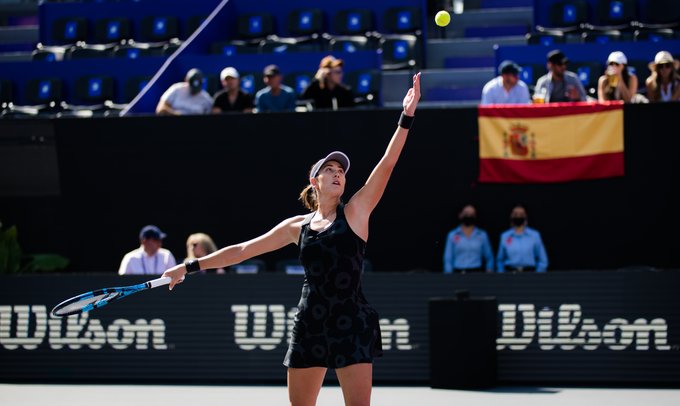 In 2019, Garbine Muguruza ended the year ranked 36th in the world.  But since hiring Conchita Martinez as her coach during that offseason, her career has been on an upward trajectory.  She immediately reached her third Major final in Australia.  In 2021, Muguruza has accumulated 41 match wins, and will climb to No.3 in the year-end rankings.  Garbine is one match away from the third biggest title of her career.

In 2019, Anett Kontaveit reached a then-career-high ranking of No.15 in the world.  While she remained in the top 32 for the next two years, her upward trajectory had stalled until this August, when she hired Dmitry Tursunov as her coach.  Kontaveit has now won 29 of her 32 matches, making a late-season surge for the ages to become the final player in this field.  Now Anett is one match away from the biggest title of her career.

Meanwhile, it’s Day 4 of the ATP Finals in Turin, which for the second day in a row is headlined by a clash between two of the top five players in the world.  Novak Djokovic and Andrey Rublev will battle for the lead of the Green Group on Wednesday afternoon.

Each day, this preview will analyze the most intriguing matchup for each event, while highlighting the other matches on the schedules.  Wednesday’s play gets underway at 11:30am local time in Turin, and 5:00pm local time in Guadalajara with the women’s doubles final, featuring the four best women’s doubles players in the world.

Djokovic is yet to lose since returning to competition in Paris following his US Open disappointment.  By contrast, Rublev had lost four of his last five matches before overcoming Stefanos Tsitsipas on Monday.  Surprisingly, this will be the first career meeting between these top players.  Andrey is now 2-2 lifetime at this tournament, while Djokovic is a five-time champion and holds a 39-16 record.  The fast conditions in Turin are ideal for Rublev’s stifling power, but as we saw on Tuesday in the Medvedev/Zverev match, a strong all-around game with great defensive skills remains tough to beat.  And no one has played that style better over the past decade than Djokovic.  The Serbian will likely be tested, but should still be favored to gain his second win of the week.

This will be a rematch from just three days earlier, as Muguruza defeated Kontaveit in straight sets in the last match of round robin play.  But it’s worth noting Anett had already qualified for the semifinals regardless of that result.  Through four matches, Kontaveit has been broken only four times, though half of those breaks came at the hands of Muguruza.  Anett was unable to break Garbine on Sunday despite holding three break points.  But the Estonian has encountered no issues in breaking her other opponents.  On Tuesday evening, she broke Maria Sakkari four times.  Overall Muguruza is 3-2 against Kontaveit.  However, just a few weeks ago in Moscow, Anett dominated Garbine 6-1, 6-1.  That match feels like a better indication of Wednesday’s outcome than Sunday’s encounter, where Kontaveit’s advancement was not in doubt.  And considering Kontaveit has claimed her last four finals, I like her chances of becoming the 2021 WTA Finals champion.

Stefanos Tsitsipas (4) vs. Casper Ruud (8) – Both players lost their opening matches in straight sets.  They split two meetings this season at Masters 1000 events, though their only hard court encounter went to Tsitsipas.

Juan Sebastian Cabal and Robert Farah (5) vs. Jamie Murray and Bruno Soares (7) – Like Tsitsipas and Ruud, these teams were both defeated in straights on Monday.  Two weeks ago in Bercy, Murray and Soares beat Cabal and Farah 6-1, 7-5.

Rajeev Ram and Joe Salisbury (2) vs. Pierre-Hugues Herbert and Nicolas Mahut (3) – The winning team will be atop the Red Group.  Surprisingly, this is the first 2021 meeting between these top three teams.

Barbora Krejcikova and Katerina Siniakova (1) vs. Su-Wei Hsieh and Elise Mertens (3) – Like the singles final, this is a rematch from round robin play, when Krejcikova and Siniakova were comfortably victorious against Hsieh and Mertens by a score of 6-3, 6-1.

Wednesday’s full Order of Play in Turin is here, and for Guadalajara is here.