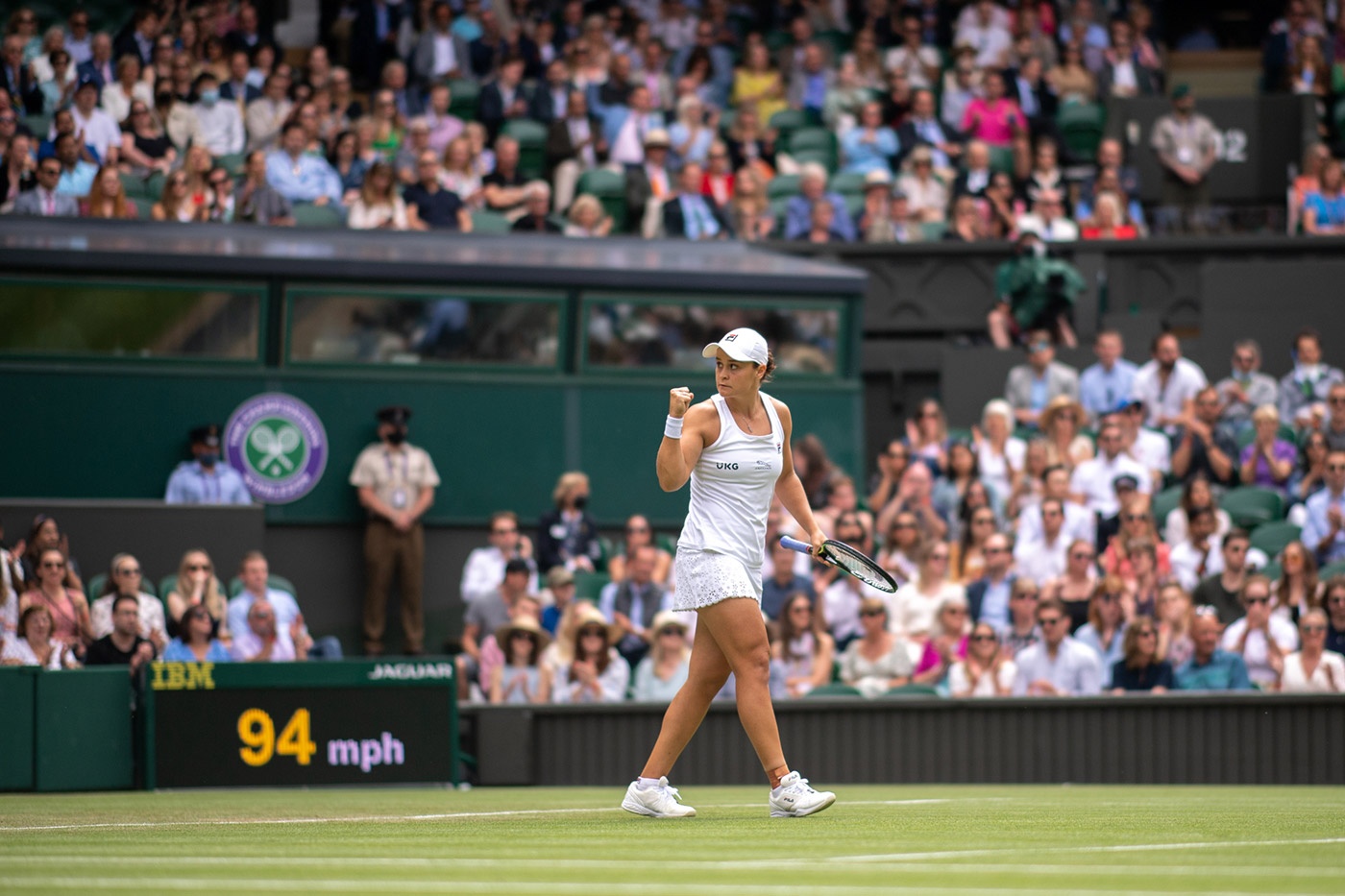 Ash Barty during the first week of this fortnight (wimbledon.com/AELTC/Ben Solomon)

Tuesday’s quarterfinals include two Major singles champions, a US Open runner-up, and five players who have never played in the championship match at a Slam.  Those Major champs, Ash Barty and Angelique Kerber, are one round away from what would be a blockbuster semifinal.  Barty will face fellow Australian Ajla Tomljanovic in Ajla’s first Slam quarterfinal, while Kerber faces Karolina Muchova, who is 8-1 in her career at The All England Club.

In the other half of the draw, Karolina Pliskova has now reached the quarterfinals at all four Slams, and will take on a surprising, first-time Major quarterfinalist in Viktorija Golubic.  Meanwhile, Aryna Sabalenka has finally moved beyond the fourth round of a Slam, but she takes on Ons Jabeur, who has defeated three straight Major champs in the last three rounds.

Doubles and juniors action will begin on the outer courts at 11:00am local time.  The ladies’ quarterfinals commence at 1:00pm on No.1 Court, while Centre Court actually starts with the conclusion of the last remaining gentlemen’s fourth round encounter.  Rain interrupted Daniil Medvedev and Hubert Hurkacz with the Russian leading two-sets-to-one.

Is the WTA’s “Ace Queen” primed to make her first deep run at The Championships?  She certainly has a game suited for this surface, and she’s a considerable favorite against Golubic, a 28-year-old from Switzerland who had lost in the first round at 14 out of her career 17 Majors prior to this tournament.  But don’t court Viktorija out.  She’s another Swiss player with an impressive one-handed backhand, and as Jason Goodall of ESPN highlighted, the only top 100 woman with such a stroke.  And she’s accumulated 43 match wins this year at all levels.  After upsetting Veronika Kudermetova in the opening round, by a score of 11-9 in the third, she hasn’t dropped a set.  That includes a notable upset on Monday over Madison Keys.  As is to be expected, Pliskova has struck 32 aces through four rounds, but she’s also hit 23 double faults, so her serve has not been in its peak form.  And their only prior encounter, a 2016 Fed Cup match, went to Golubic.  However, Pliskova’s considerable advantage in power and experience should be enough to advance her to Thursday’s semifinals.

Aryna Sabalenka (2) vs. Ons Jabeur – Not Before 2:30pm on Centre Court

What a tournament this has already been for Jabeur.  One of the sport’s most likable players broke a lot of new ground before this fortnight even began, and now she’s scored consecutive victories over Venus Williams, Garbine Muguruza, and Iga Swiatek.  Her all-court style will be quite the contrast to Sabelenka’s big, penetrating groundstrokes.  They’ve split two previous meetings, both of which occurred over the past year.  Jabeur won on clay, while Sabelenka prevailed on hard court.  Who will win on grass?  Based the way Jabeur has been taking out top names, I’m not betting against her.  And as great as Sabelenka has performed on tour, she’s yet to establish herself at the Majors.  Whoever wins will continue to break new ground by reaching their first Slam semifinal.

This is the best version of Angelique Kerber we’ve seen since her title run here three years ago.  She’s on a nine-match grass court win streak, and comfortably dispatched of Coco Gauff on Manic Monday.  But Muchova also loves playing on grass, and is an impressive 16-5 this season despite missing a few months due to injury.  Kerber is 2-0 against Muchova, with both matches taking place on hard courts in 2019.  In what could easily turn into the best match of the day, Kerber should be slightly favored.  When she picks up a head of steam like she currently has, Angie has proven she’s a tough out in the latter stages of Majors.

Ash Barty (1) vs. Ajla Tomljanovic – Not Before 4:30pm on Centre Court

This all-Australian matchup is the first-time 25-year-old Barty and 28-year-old Tomljanovic have met.  Ajla has battled injuries and illness during her career, and has finally reached her first Slam quarterfinal in her 27th attempt.  But this is very familiar territory for Barty, who has advanced to the second week at seven of her last eight Majors.  And while she’s yet to play at her very top level thus far, Ash is one of the best players in the sport at figuring out ways to win regardless.  Barty is a significant favorite to achieve her first Wimbledon semifinal.

Nikola Mektic and Mate Pavic (1) vs. Lukasz Kubot and Marcelo Melo (8) – Mektic and Pavic are a fantastic 45-5 on the year, with seven titles.  Kubot and Melo won this event in 2017.