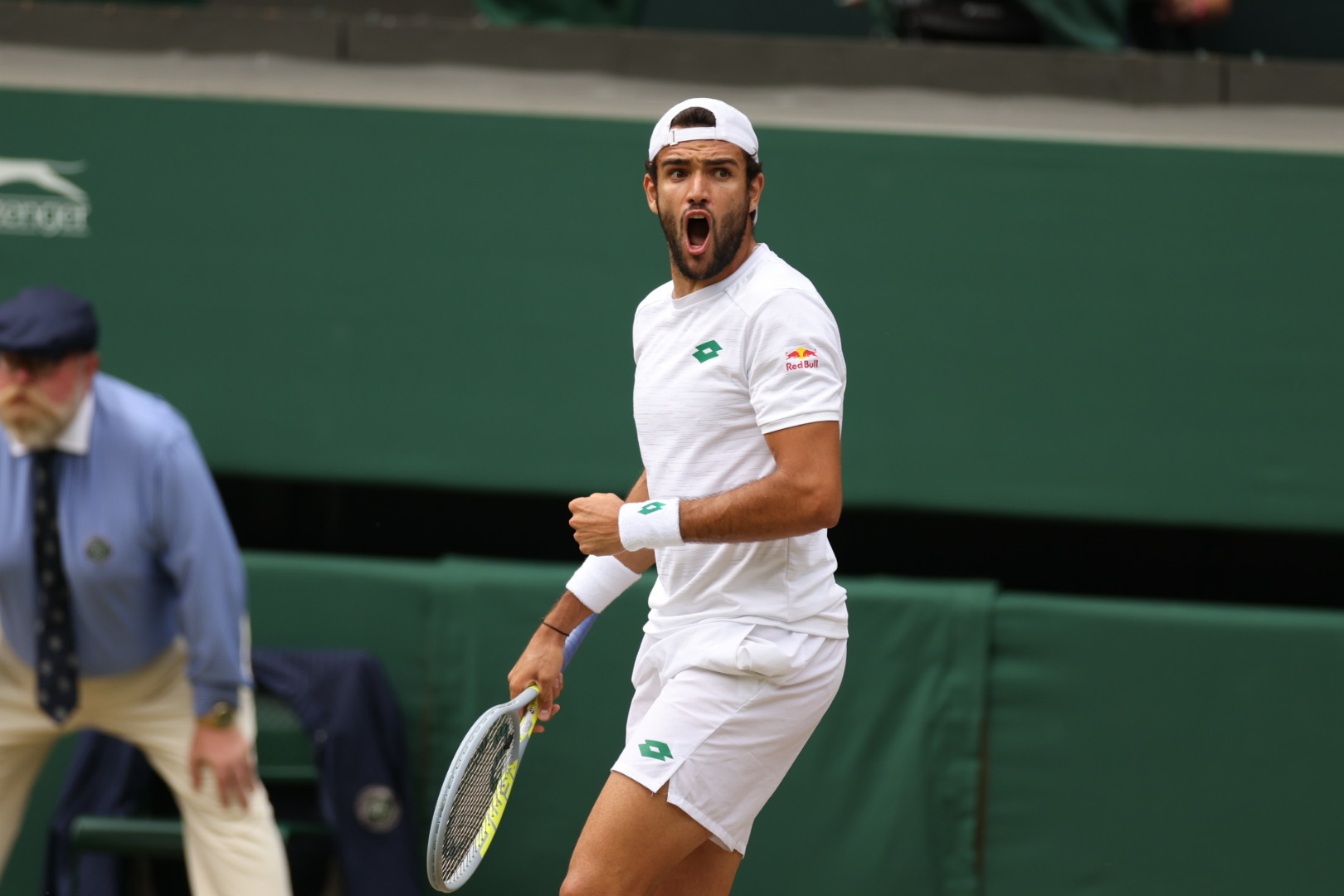 Matteo Berrettini has become the first Italian in history to reach a Wimbledon final after defeating Hubert Hurkacz 6-3 6-0 6-7(3) 6-4.

The Italian produced a complete performance to down the Pole in four sets to reach his first grand slam.

As a result he has become the first Italian male or female to reach the Wimbledon final.

Both players settled well into the match considering it was their first Wimbledon semi-final.

It was the 7th seed who created a few break points before Hurkacz saved them with some accurate serving and effective patterns of play.

Then it was Hurkacz’s turn to up the intensity on return with Berrettini having to go through an eight minute game as the Pole implemented his net court play.

However Berrettini held and then took the opportunity in the seventh game as his backhand slice was causing the 14th seed all sorts of problems.

The Italian’s all-court game was in supreme condition and new balls arrived at the perfect time as he continued to bang down the aces and forehand winners.

Errors started popping off the racket of Hurkacz as another break was secured for Berrettini as he claimed the opening set 6-3.

The momentum was carried into the second set as Berrettini’s mix of power and variety frustrated Hurkacz.

More errors came from the Pole’s racket as he now lost his composure that he usually has when on the court.

A string of six games saw a complete reversal of roles that happened to Hurkacz against Federer on Wednesday. It was the Pole’s turn to lose a set 6-0 as he was now two sets to love down.

After returning from a lengthy bathroom break, the Pole came back more motivated and played a much cleaner set of tennis.

Despite having more half-chances, the Italian couldn’t convert any of them as the Pole started winning more points behind his first serve.

As Berrettini continued to hold his service games comfortably, the crowd were rallying behind Hurkacz as they wanted to see a fourth set.

Hurkacz continued to show great tactical play and character in the big moments on serve as he edged out service holds to force a third set tiebreak.

In the tiebreak, Berrettini got nervy and tight as Hurkacz started to win return points with ease as he was inspired.

Now it was the Italian’s turn to be frustrated as some simple unforced errors were made as he went 4-0 down.

The Miami Open champion refused to give up and concede his lead as he took the tiebreak 7-3 and force a fourth set to the crowd’s delight.

Now it was Berrettini’s turn to take a bathroom break and reflect on recent events.

It seemed to help immediately as the Italian broke in the first game after some tentative Hurkacz play.

Not being broken in the entire match the Italian seized control of the match and continued to dominate on serve.

Despite the Pole’s strength in character, the Italian’s firepower and mixture of slices was just too much.

Another couple of aces secured Berrettin’s place in history as he becomes the first Italian male or female to reach the Wimbledon final.

After the match Berrettini admitted that this was a dream scenario, “I have no words, really. I need a couple of hours to understand what happened,” the Italian admitted.

“I played a great match. My family is there, my team. I never dreamt about this because it was too much. When you play at this level, you try to be at your best at everything. I felt that I deserved to win the 3rd set, I was feeling the better player and that was I told to myself. It worked.”

Now the 7th seed will face Novak Djokovic or Denis Shapovalov for the title as he looks for his maiden grand slam title.