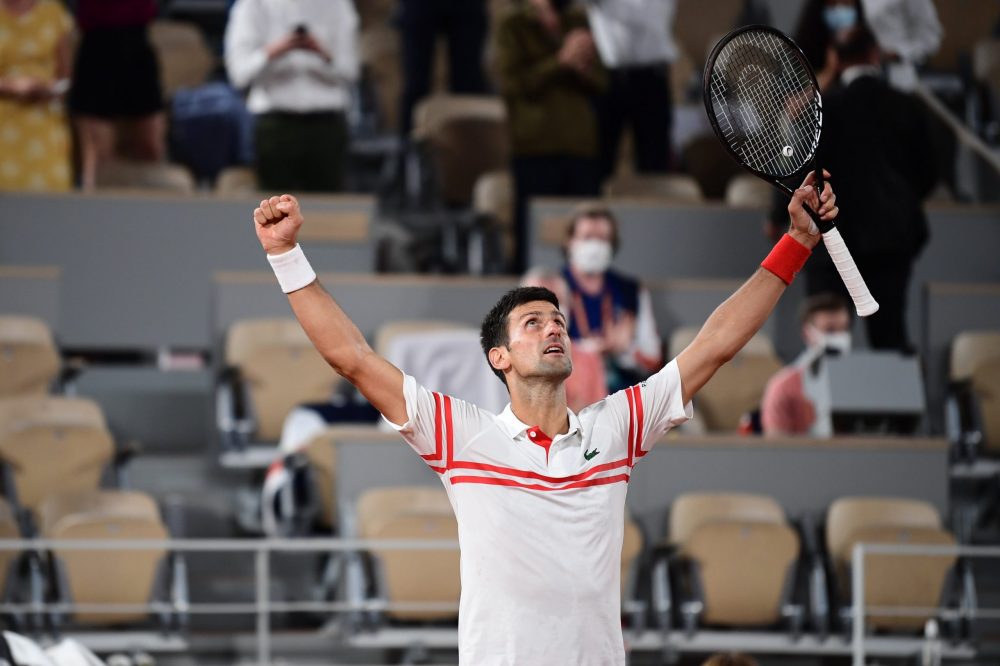 Novak Djokovic avenged his loss from last year’s French Open final by producing a emphatic display to defeat Rafael Nadal and reach the final in what was one of the best matches of their entire rivalry on the Tour.

The two tennis giants locked horns on court Philippe Chatrier for a marathon four hours and 11 minutes before Djokovic prevailed 3-6, 6-3, 7-6, 6-2, in what was a roller coaster encounter. Becoming the first player in history to have defeated Nadal at the tournament on multiple occasions. In his latest match the Serbian fired a total of 50 winners and broke eight times en route to what he later described as one of the most memorable wins of his career.

“It was a privilege to be on the court with Rafa ( Nadal) and this incredible match, it is probably the biggest match of my life here in Paris, that’s for sure, and also with the best atmosphere for both players,” Djokovic said during his on-court interview.

The world number one started to apply the pressure from the word play and earned the first breakpoint of the match in the opening game and managed to have two looks but the Spaniard saved both with his booming serve. Nadal responded the very next game earning his first breakpoint and breaking the Belgrade native to take an early 2-0 lead and at 3-0 managed to go up a double break in just 20 minutes. Which was enough for him to take the first set.

Djokovic once again respond at the beginning of the second set earning three breakpoints at 1-0 and breaking to take a 2-0 lead before the Spaniard would bounce back breaking back to go back on serve. The Serb had another chance to take the lead at 3-2 when he had three chances and broke to take a 4-2 lead. That break proved crucial as Djokovic would serve out the second set to level the match at one set apiece.

The third set was a much tighter affair and at 1-1 it was Djokovic who had the first chance to break but Nadal saved and held serve. At 2-2 the world number had another chance to get the crucial break and at the third time of asking he broke the Spaniard serve but relinquished it the very next game.

The Serb would break again the following game and managed this time to hold serve and had a chance to serve for the set at 5-4 but Nadal came up with some crazy forehand winners to set up a breakpoint and break back.

The Serb had two chances again to get the break back but the world number three saved both and held serve before applying pressure once again. Earning a set point on the world number one serve but he managed to save and force a tiebreaker.

The breaker was just as tight and at 4-3 Nadal missed a crucial put away at the net and that break was enough for the Djokovic to win the breaker and the third set.

The Spaniard had the better start to the fourth set earning a breakpoint in the opening match and broke to take an early 1-0 lead but at 2-1 the world number responded once again earning two chances to break and breaking to level the match at 2-2. At 3-2 Djokovic had more chances to break and he earned the crucial one once again. Going on to serve out the match to book his spot in Sundays final against Stefanos Tsitsipas.

After the match in his post match on court interview Djokovic was asked how he was able to handle the pressure and focus on his game in a match like that.

“Evidently if you want to beat Rafa (Nadal) on his court you have to play your best tennis and tonight was the night of my best tennis, the pressure to play against him is quite special”.

Djokovic currently holds a 5-2 record against his Greek opponent and they most recently played a couple weeks ago in Rome with the world number one winning in three sets.