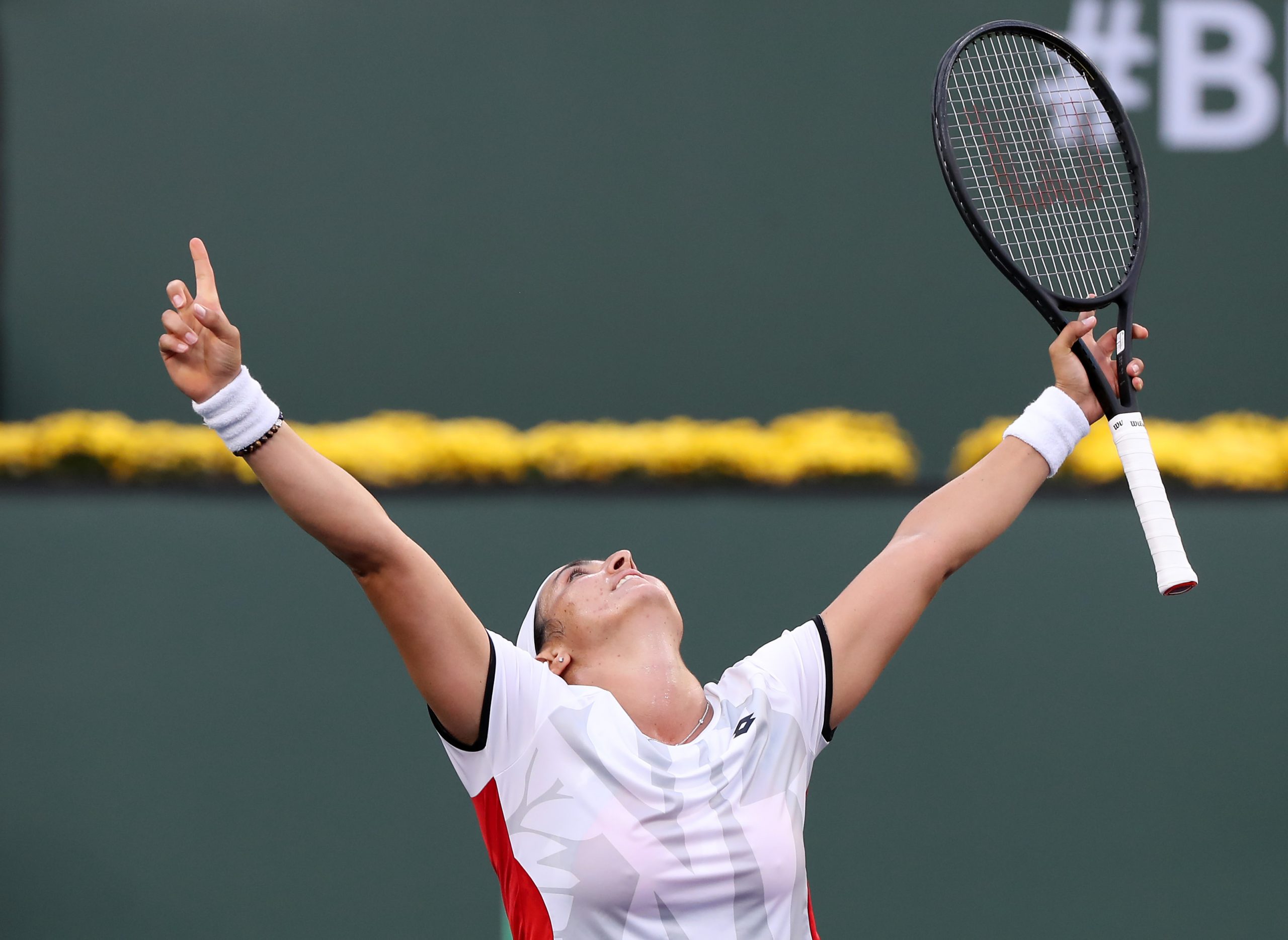 Also on Friday, the last two men’s singles quarterfinals will be decided.  Will Stefanos Tsitsipas and Sascha Zverev prevail against two players making their Masters 1000 quarterfinal debuts, setting up a blockbuster semifinal on Saturday?

Azarenka is a two-time champion of this event, though prior to this fortnight, she was only 2-2 in the desert since her last title run in 2016.  Injuries have derailed her progress throughout this season, but she has been in fine form this tournament, not dropping a set through four rounds.  Ostapenko was just 4-3 lifetime at Indian Wells before this year, and was a modest 23-15 on the season when she was withdrawn from the US Open due to undisclosed medical reasons.  But this past month, she’s gone 9-2, and is a win away from her third WTA 1000 final.  Their only previous encounter came two years ago at Roland Garros, when Azarenka prevailed in straight sets.  Like most Ostapenko matches, this will mostly be decided by her winner-to-error ratio.  When she starts making errors, she can become awfully negative real fast.  But based on her current form, I expect Jelena to remain confident, and dictate her way to Sunday’s championship match.

With Thursday’s quarterfinal win, Jabeur will officially become the first Arab player (male or female) to debut inside the top 10 on Monday.  It’s been an incredible season for Ons, who has accumulated 48 wins, and is 8-1 over the last three weeks.  Badosa is now into her second WTA 1000 semifinal of the year, equalling the feat she first accomplished in Madrid, her country’s biggest tournament.  Paula has consecutively defeated three of 2021’s best players without dropping a set: Coco Gauff, Barbora Krejcikova, and Angelique Kerber.  These two friends played earlier this year at another American WTA 1000 event, when Jabeur outlasted Badosa in Miami 7-5 in the third.  Infused with the excitement of making her top 10 debut, I expect the more experienced and eclectic Ons to find a way to overcome Badosa, and to play in the biggest final of her career come Sunday.

Stefanos Tsitsipas (2) vs. Nikoloz Basilashvili (29) – Tsitsipas leads their head-to-head 2-0.  Both matches occurred on hard courts in 2019, and both were quite tight.  Basilashvili ousted Karen Khachanov in the last round.

Sascha Zverev (3) vs. Taylor Fritz (31) – Zverev is 3-1 against Fritz, though they are 1-1 on hard courts.  Their most recent meeting on this surface went to the American, two years ago in Basel.  This week Taylor upset the two top-ranked Italians: Matteo Berrettini and Jannik Sinner.

Grigor Dimitrov hailed his recent career milestone as he moved into the Indian Wells semi-finals. 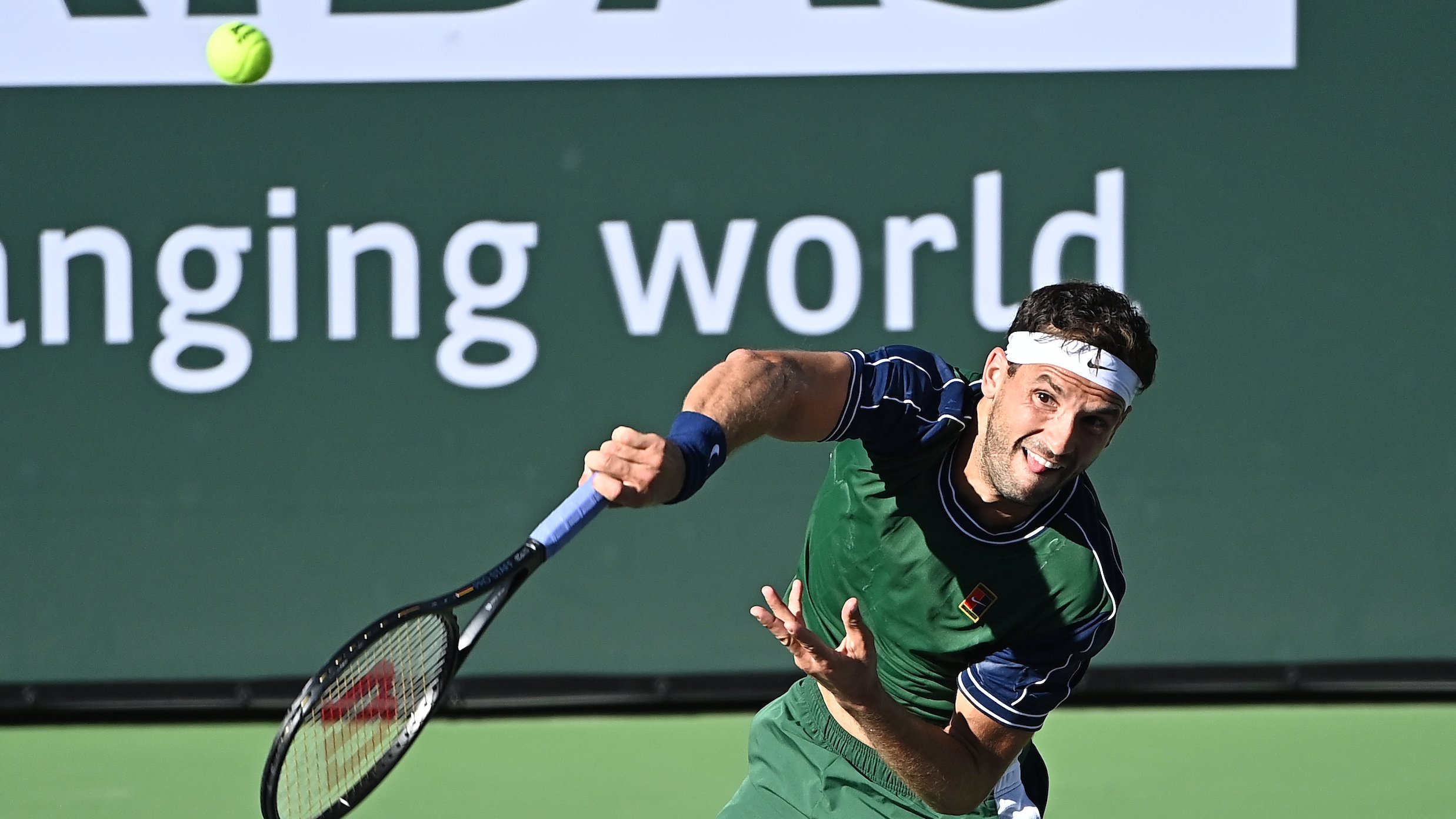 Dimitrov backed his win over US Open champion Daniil Medvedev in style to reach his first masters 1000 semi-final of the season.

However reaching the semi-finals wasn’t the only achievement as he sealed his 100th masters 1000 win of his career.

Speaking after the match Dimitrov described it as ‘surreal’, “I didn’t know until everyone started mentioning it now,” Dimitrov said in his post-match press conference.

“Really I’m very humbled. It’s such an amazing thing. I’m so thankful to everyone, to everybody that is in the team, that has worked in the team. Last but not least my family.

“It feels like I want to say surreal because I never thought turning pro that I’m going to have let’s say a hundred matches at such a level. I’m very fortunate to be able to put myself in that position over and over, especially throughout the tough years, injuries and so on.

Dimitrov’s first masters 1000 win came against Marsel Ilhan in 2011 at Cincinnati and the Bulgarian’s only trophy at this level came in 2017 when he beat Nick Kyrgios in the final of the same tournament.

Now Dimitrov will look to win his second masters 1000 title of his career as he takes on Cameron Norrie in the last four on Saturday. 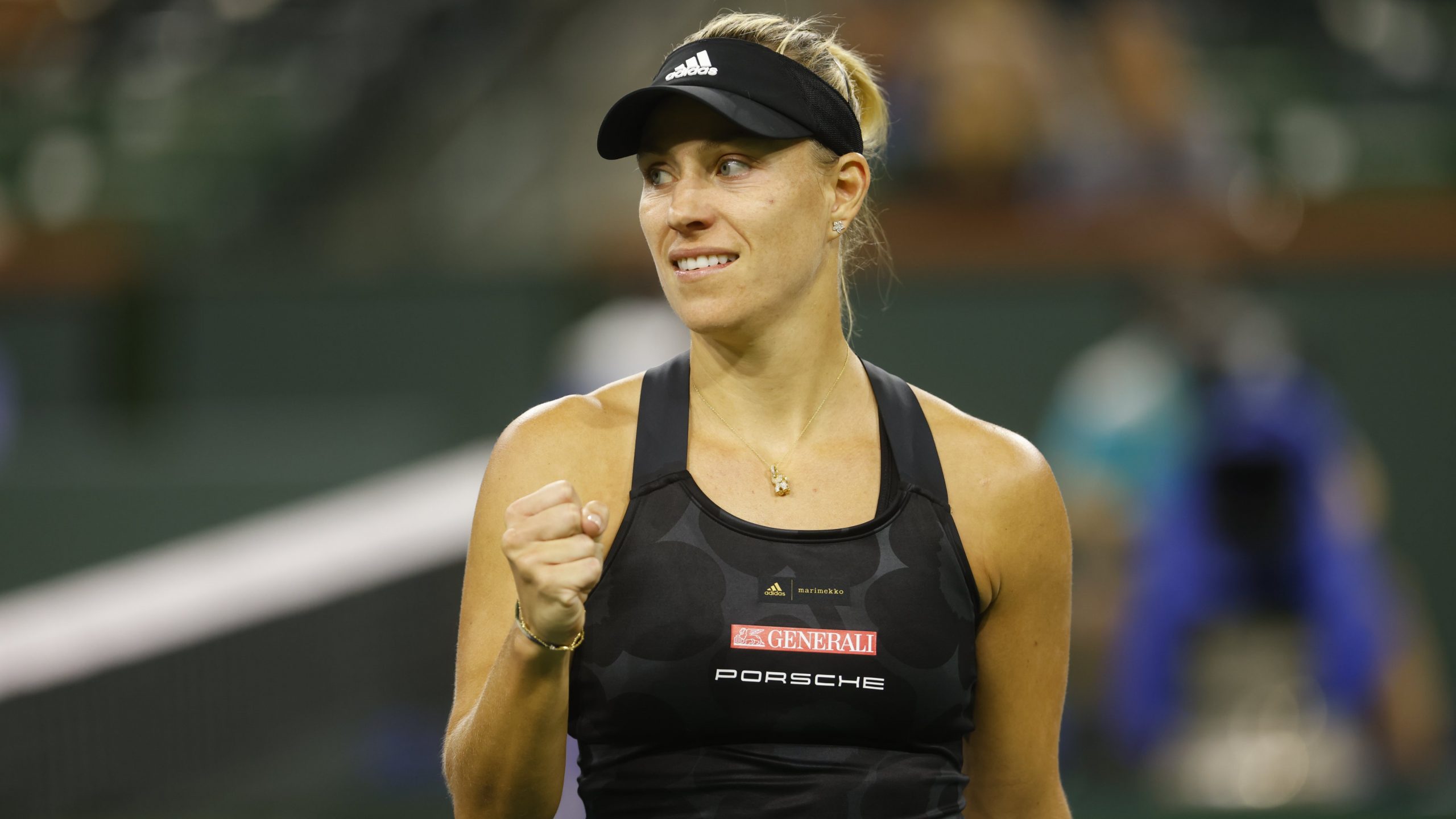 Angelique Kerber is a defending finalist at Indian Wells (twitter.com/BNPPARIBASOPEN)

Angelique Kerber has won 20 of her last 24 matches.  Anett Kontaveit has claimed 16 of her last 17, which includes two titles.  Paula Badosa is 38-15 on the year, and 8-3 against the top 20.  Ons Jabeur is on the cusp of becoming the first Arab player to reach the top 10.  Which two of these four impressive performers will reach Friday’s semifinals?

A win today would guarantee Jabeur’s top 10 debut next week.  But that will be a tough ask against the WTA’s hottest player of the last two months.  Since adding Dmitry Tursonov as her coach, who previously guided Aryna Sabalenka during her rise to the top of the sport, Kontaveit has been on fire.  She was the champion in both Cleveland and Ostrava, with her only loss coming at the US Open against another of 2021’s best players, Iga Swiatek.  Anett has not dropped a set through three rounds, though Jabeur has been dominant as well, allowing her last two opponents only eight games across four sets.  Ons has taken both of their previous tour-level encounters, and she’s the last person not named Iga to defeat Kontaveit.  Two months ago in Cincinnati, she outlasted Anett 7-5 in the third.  But based on Kontaveit’s current level of confidence, I give her the slight edge to advance after what I expect to be a tenacious battle with some grueling rallies on these slow-playing courts.

This will be the first career meeting between the three-time Major champ and the 23-year-old Spaniard, who has had a tremendous year despite a terrible start.  Upon arriving in Melbourne, Badosa tested positive for COVID, which forced her to spend three weeks in full quarantine.  But she’s now vying for her fifth semifinal of the season, and her first since May.  Kerber had a pretty miserable season until June, and even pondered retiring from the sport.  However, she has been an entirely different player since the grass court season.  Her only losses since mid-June have come against world No.1 Ash Barty, or fellow lefties (Leylah Fernandez, Jil Teichmann).  But these court speeds are not conducive to Angie’s game.  They are playing more at the speed of a clay court, and that’s never been her best surface.  By contrast, Badosa thrives on clay, compiling a record of 17-3 this year.  In the last round, Paula defeated Barbora Krejcikova in straight sets, and Krejickova has been one of 2021’s toughest outs.  I like Badosa’s chance of achieving her fifth semifinal of the season.

Hubert Hurkacz (8) vs. Grigor Dimitrov (23) – Hurkacz was a semifinalist here in 2019.  Dimitrov pulled off an incredible comeback on Wednesday, after falling behind a set and two breaks against top-seeded Daniil Medvedev.

Su-Wei Hsieh and Elise Mertens (2) vs. Shuko Aoyama and Ena Shibahara (3) – When these two teams met in the Wimbledon semifinals, Hsieh and Mertens prevailed 6-3 in the third.

Rohan Bopanna and Denis Shapovalov vs. Aslan Karatsev and Andrey Rublev – This quarterfinal features three players in the top 15 of the Race to Turin singles rankings.  The last time Karatsev and Rublev teamed up, this past March in Qatar, they won the title.