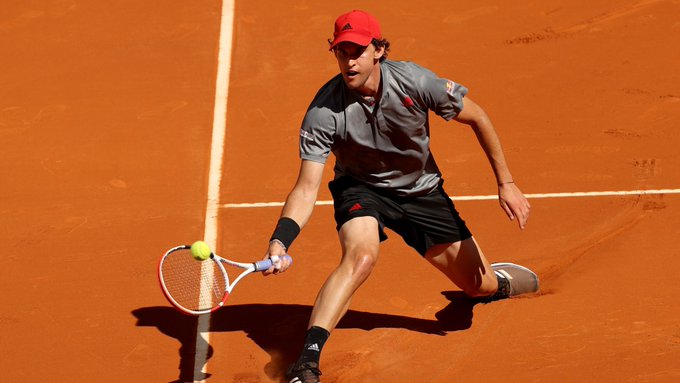 Two-time finalist Dominic Thiem says he is at a loss as to why his level is not where he wants it to be after crashing out of the French Open on Sunday.

The fourth seed was leading Pablo Andujar by two sets before getting knocked out 4-6, 5-7, 6-3, 6-4, 6-4, by the Spanish 35-year-old who also recently defeated Roger Federer in Geneva. It is the first time the Austrian has lost in the first round at Roland Garros in his career where he had reached the quarter-finals or better every year between 2016-2020.

During the match Thiem looked to be struggling with his consistency on the court and even at times appeared to be a bit lost. Continuing what has been a roller-coaster season for him. Prior to the French Open, Thiem lost his opening match at the Lyon Open to Cameron Norrie and fell to Lorenzo Sonego in Rome.

“I was not struggling at all with my motivation, but the game was just not there today,” he told reporters in Paris about his latest loss.
“All the shots are missing power. They are not accurate enough. I’m not moving well enough, so everything in my game there is some percent missing.”

Elaborating further the world No.4 says the problems started for him upon arrival in France over a week ago. Although he is unable to pinpoint a reason as to why. Sounding alarm bells for both his and coach Nicolas Massu with Wimbledon just four weeks away.

“Since I stepped back on court (from a break) it has been already two months, and I was really practicing well, super intense as well. The shots were there in practice and they also got better in Madrid and Rome. But in Lyon and here (Roland Garros) the shots, how I moved and everything was just not the real me,” Thiem reflected.
“It’s just not good enough at the moment. It’s a very tough situation.”

The 27-year-old has now won just nine matches in eight tournaments played so far in 2021. In three of those events he lost his opening match. To put that into perspective back in 2019 he achieved 18 Tour wins prior to the start of the French Open.

Thiem’s lull follows what was a breakthrough year for him where he achieved one of his career goals by winning a Grand Slam title at the US Open. Since then, he admits that he has mentally found it hard to reset.

“It’s amazing to reach such a big goal, but at the same time, something is different after. It’s a big learning process and despite the loss, which hurts so much, I still hope I can bounce back stronger than before. But right now I don’t know when the moment is coming.” He concluded.

It is the seventh time in Thiem’s career he has lost in the first round of a Grand Slam.