Rafael Nadal Will Be Ready For Start Of Clay Season, Says Doctor - UBITENNIS

Lorenzo Musetti, Lorenzo Sonego, Dan Evans and Taylor Fritz are the names to watch at the Sardegna Open in Cagliari

The world No.8 gives an honest assessment on his chances of winning his first Masters title. 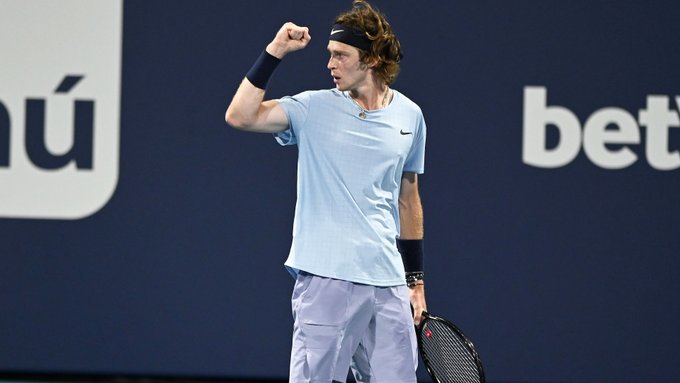 Russia’s Andrey Rublev has insisted that he is not the favourite to win the Miami Open despite being the only top 10 player remaining in the draw.

The world No.8 edged out rising star Sebastian Korda 7-5, 7-6(7), in what was a closely contested encounter at the Hard Rock Stadium on Thursday. In both sets Rublev boasted a break advantage before losing it. Overall, he hit 15 winners to 13 unforced errors and benefited from 36 mistakes which was made by his opponent during the match. It is the first time in his career he has reached the semi-final of a Masters 1000 event.

“It’s always not easy when you face for the first time someone new, especially when you have pressure,” said Rublev. “It’s even tougher. I’m really happy that I could handle my emotions really well and I could handle the pressure.”

Following the exit of Stefanos Tsitsipas, Rublev is the highest ranked player remaining in the draw. Followed closely by world No.12 Roberto Bautista Agut. He is the only player remaining yet to lose a set in the tournament and has won more first service points than anybody else (84%).

The 23-year-old has already won 20 matches this season which is more than any other player on the men’s Tour. Last month he clinched his eighth ATP title in Rotterdam and also helped Russia win the ATP Cup earlier in the year. Given his credentials many are labelling Rublev as the new favourite to win Miami. Something he is keen to dismiss.

“I’m not really thinking that much because I respect all the players,” he stated.
“It’s more about that maybe I feel extra pressure because I’m the one left out of the top 10. But I lost to (Hubert) Hurkacz. Last time I lost to Roberto (Bautista Agut) 6-3, 6-3 just two weeks ago. Jannik (Sinner), who is already beating many players.
“So in the end, anybody can win now. All of them are playing good tennis. It’s not about ranking.”

It is Polish world No.37 Hurkacz who will be Rublev’s next challenge in the tournament. Who has become the first player from his country to reach a Masters semi-final since Jerzy Janowicz in 2012 after stunning Tsitsipas in three sets. The two players have clashed once before which was on clay at the Italian Open last year. On the occasion Hurkacz triumphed in three sets.

“He has a really huge serve and really great strokes,” Rublev commented on his next opponent in Miami. “He’s really aggressive from baseline. He goes for the shots and last time we played he beat me. It’s going to be an opportunity for me to do better. I will do my best and we’ll see.”

A win on Saturday would send Rublev into his 11th ATP Tour final and first in America. He is only the second Russian man in history to reach the last four in Miami after Nikolay Davydenko back in 2008.