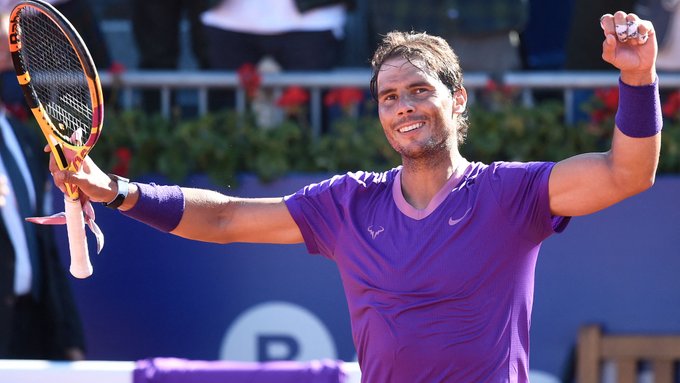 Rafael Nadal produced his best match of the week to beat Pablo Carreno Busta 6-3 6-2 and reach the Barcelona final.

The world number three produced a highly impressive 90 minutes worth of tennis to dominate his compatriot.

Into his 12th Barcelona final, Nadal will face a red-hot Stefanos Tsitsipas in tomorrow’s showpiece event.

It was domination from the very start as it was clear that Carreno Busta would have to produce his very best tennis to beat a defensively strong Nadal.

Having more acceleration and angles on his shots, Nadal took a 5-1 lead in the opening set as Carreno Busta failed to hit winners.

However the world number 15 capitalised on Nadal’s low confidence recently as he managed to get one of the breaks back as Nadal’s serve was put to the test.

After holding serve, Carreno Busta then applied more pressure by varying up the depth and pace of his shots therefore maintaining excellent point construction.

The 20-time grand slam champion had to dig deep and his clutch serving helped him to save three break points in the eighth game. Eventually after finding some aggressive tennis in key moments Nadal secured the opening set 6-3 in 45 minutes.

There was a sense that Carreno Busta’s chance had disappeared as Nadal took control of the match in the second.

Dominating the points in the baseline as well as capitalising on every short ball Nadal secured a double break lead at 3-0. There was no letting go from that point as the 11-time champion ensured he would return to the Barcelona final for a 12th time.

After the match Nadal acknowledged of his improvement, “I have been improving whole week,” Nadal said in his on-court interview.

“Every day was a little bit better, today was my best match, tomorrow will be a very tough one against an opponent who’s playing at a very high level but let’s see I hope I will be able to play even better than today.”

In his best match of the clay court season so far, Nadal appears to found his form and confidence at the right time as he appears in the Barcelona final again.

Nadal’s reign in Spain will be under threat as he faces an in-form Stefanos Tsitsipas who has just won the Monte-Carlo title. However the Spaniard has yet to lose a final in Barcelona and will be confident of the same outcome tomorrow.

Related Topics:ATP BarcelonaRafael Nadal
Up Next